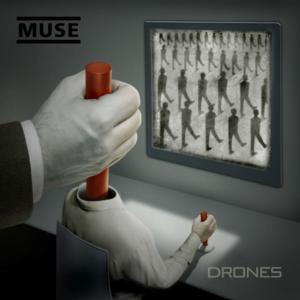 The artwork for Muse’s forthcoming album, “Drones”, along with pre-order information. was leaked on iTunes in some territories for a few minutes before being promptly taken down.

“Drones”, which has been hailed as a return to Muse’s rock-driven roots, incorporating noisier elements of b-sides such as “Yes Please” and “Agitated” that saw extensive live performance towards the end of the touring cycle of 2012’s “The 2nd Law”, is due to be released later this year.

The sound of the album, the themes, riffs and bits that have been in fruition since 2003 – including some stuff that’s been played live since the Absolution tour.

Traditionally, after certain songs, they play little riff jams. Most of the time, they’re other bands – I’ve seen them play stuff by Deftones, Primus, Nirvana… but sometimes they’ll think of a riff during a gig, then refine it in these jams, and play it until they’ve made it into a song. This is how “Take A Bow” and “Stockholm Syndrome” were written.

The first song to be shared from the album, “Psycho” (which will be available tomorrow), is written around the riff known as the “0305030” riff (after the tablature), which has been used as an outro for “Stockholm Syndrome” and “Map of the Problematique” since 2003.

This is the longest time the band has spent writing a particular song, after 2009’s “Exogenesis Symphony”

This album is a revisitation of the sound they have toyed with in the past on b-sides and rarities such as “Agitated”, “Yes Please” and “Dead Star” (all of which were performed live during the “2nd Law” tour), where the band explored influences of noise rock, post-punk and grunge, relying more of riffs, textures and walls of noise than the slick electronics and orchestras that have filled their recent albums.