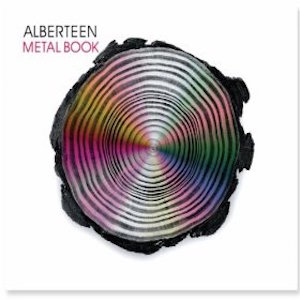 Following heavy airplay on 6music it’s safe to say Alberteen’s star is in the ascendency. They’ve just released their debut album, Metal Book, & if our reviewer Clair Chapman is to be believed, it’s a goodun’.

I’ve waited a long time for this album. It has really excited me, and for that I am so very grateful to Ade Berry, Phil Shaw and John Rose of Alberteen. Released this February, and including the single ‘A Girl and a Gun’, which received heavy play on 6 Music, it is a grown-up, energetically played and intelligently written album from beginning to end. There is not a drearily played beat, or a single vocal you don’t feel from the guts up. This a work of genius that you (like me) are going to wish you’d had in your collection for years.

The sound is an amalgamation of themes; from gentle sixties inspired pop tones to throbbing rock, and everything in between. There is a beautifully stylish beats and bass-driven Rockabilly sound, with delicate infusions of Talking Heads and Nick Cave. The vocals are clever and passionate, and had Uncut magazine not already described the album as a “Lynchian soundtrack”, that is exactly the adjective I would have used – Lynchian.

There are appearances on various tracks by brilliant musicians like Mark Refoy (Spiritualized) and Tony Robinson (Super Furry Animals), and production was at the highly acclaimed hand of Mike Bennett (The Fall, Ian Brown). These collaborators lend a darkly exotic texture to many of the tracks, although having said that, I was able to dance to much of the album, while shouting, “YES! It’s even got bloody Hammond” at my speakers.

The lucky, lucky men of Alberteen have an amazing album on their hands, and I urge you to enjoy it for yourself today.

All words Clair Chapman. More by Clair can on Louder Than War can be found here.