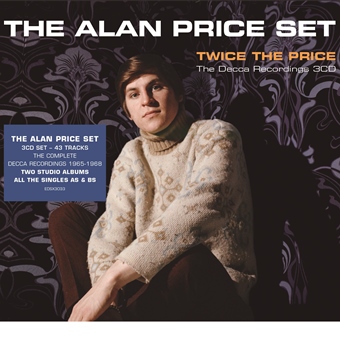 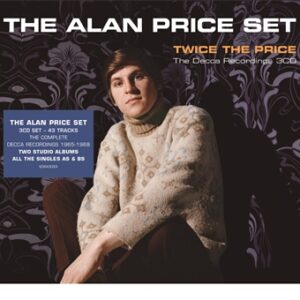 Twice The Price / The Decca Recordings

If there is a sixties veteran that is due a re-evaluation it certainly is Alan Price. More celebrated for his short stint as the Animals keyboard player, his solo LP’s are full of gems waiting to be rediscovered and hopefully Edsel will reissue his seventies LP’s if this anthology proves to be successful.

The First disc contains the album “The Price To Play” released in 1966. Only featuring covers, the record sees the band offer their takes on several songs that were staples of all bands touring the soul circuit in the UK round these times. Price has always enjoyed meshing songs together in a medley format and the record starts with an excellent one including “Barefootin'”, “Let’s Go Baby” and “Land Of 1000 Dances” which sees the band swinging effortlessly. The bluesy “Goin’ Down Slow” is still part of Alan’s live set today as is the chirpy “Hi-Lili, Hi-Lo”. Price has never held the material he co-wrote in The Animals with high regard, but on this LP and its follow-up, you feel he’s impregnating himself with other people songs to build up his own style. The band is absolutely impeccable and the tightness of the arrangements often make songs that have been covered a gazillion times interesting (“I Can’t Turn You Loose” being a good example).

On the second disc we are treated to the Set’s second LP for Decca, the imaginatively titled “A Price On His Head” (maybe a way from the label to tell Alan he needed to shift more units). Price comes up with his first original material as a solo artist with “The House That Jack Built” (that climbed all way to number 4 on the UK charts), “A Grim Fairy Tale” and “She’s Got Another Pair Of Shoes”. By this point Alan had discovered Randy Newman and his admiration for the Californian’s songwriting comes out loud and clear as seven songs out of the thirteen on the LP are penned by him. In Newman, Price found a fellow admirer of pre-war American songwriters who also had a sixties pop sensibility. To dedicate half an album to another songwriter’s material (when the chart success of “The House That Jack Built” proved that Price was a more than able craftsman himself) shows how impressed he must have been with Newman’s songwriting. These recordings plus the subsequent chart success of “Simon Smith and the Amazing Dancing Bear” demonstrated that Price played an important in introducing Newman to British audiences. Fine takes on “So Long Dad” and “Tickle Me” prove to be highlights of the LP. It is worth noting the absence of any psychedelic overtones throughout “A Price On His Head”, wisely avoiding the trappings of attempting a kitchen sink production to try and sound hip. Price never matched the vocal power of Eric Burdon on his solo albums but he more than compensated by his ability to appropriate a song written by somebody else (“Living Without You”).

The third CD neatly compiles all the A-sides and B-sides recorded by the Set for Decca. Covering a musical spectrum as wide as the Pacific ocean, it starts with a slightly subdued cover of “Any Day Now”, a Bacharach-Hilliard song originally recorded by Chuck Jackson, then moves to more exciting pastures with Alan’s great recording of Screaming Jay Hawkin’s “I Put a Spell On You”. The feeling you get on this third disc is one of Alan trying to chase chart success at any cost, those who have attended his shows at the Bulls Head in Barnes might have heard the stories of him being chased for money by loan sharks as he was paying the musicians in the Set with his own money. Artistic highs sit just beside some rather less thrilling tunes (the instrumental “Lechyd-Da” and the novelty song “Tappy Tortoise”). However these few moments are more than compensated by numbers such as “Yours Until Tomorrow” (penned by Goffin and King) and Anne Briggs’s “The Time Has Come”. An upbeat take on the standard “Falling In Love Again” closes of the compilation neatly.

For people who are in London round the second Thursday of the month we recommend a trip to Barnes to see Alan play at The Bull’s Head, far from a sedate performance, it’s a rocking display of tight musicianship that sees Alan revisit his hits and put his own stamp on selected covers.

~
Alan Price can be found on his personal website: AlanPrice.net