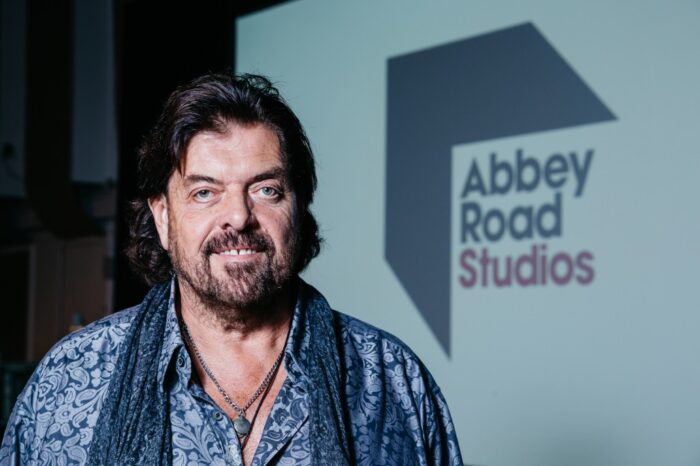 Legendary engineer, producer and musician, Alan Parsons whose past is indelibly linked to Abbey Road, most notably for his work with Pink Floyd, The Beatles and his own seminal music with The Alan Parsons Project, presented a talk at Studio 2 of Abbey Road Studios. The lecture called, Sleeve Notes – “From Mono To Infinity” was captured with words by Louderthanwar’s Philip Allen and pictures by Paul Grace.

Journalist David Hepworth began by discussing with Alan his background/history of how he came to work at Abbey Road. Alan left public school at 16 and started working in the research department of EMI where he heard a masters recording of “Sgt Pepper’s Lonely Hearts Club Band” by The Beatles. That blew him away and it was at that moment that he decided he had to work in music.

After being told by EMI that he stood no chance of getting a job at Abbey Road Studios he wrote a letter to the boss of Abbey Road and within 3 days was interviewed and was working there 2 weeks later. Attire at the studio was very smart with suits and tie being standard. A photo of Alan’s pass card appeared on the screen behind them looking very smart to much laughter from all.

At Abbey Road Alan started as Tape Operator in the tape library. He once accidentally erased a recording of the Bryan Fahey Orchestra when he was playing back their takes to them, but all was made good as the band re-recorded and actually preferred the newer version they had recorded. Alan moved to Savile Row’s Apple Studio next to help “Magic Alex” and was Tape Operator on “Let It Be”. When first meeting John, Ringo, Paul, George and Yoko, it was a bit overwhelming.

Paul McCartney could be very controlling and wanting a more “live” sound so they played live on the roof of the building to create and capture the vibe he wanted. Ringo lay down the drums first of all during the recording sessions and after that didn’t have much to do while the other instruments/vocals were being recorded. But he did have the job of blowing bubbles under water on ‘Octopus’s Garden’.

Alan talked about Pinky and Perky (yes!) and that the songs were recorded at Abbey Road in double time and then sped up to create the pig-sounding squeaky vocals. He played the Pinky & Perky Xmas song and then the original slower version which was pretty funny. Of the instruments in Studio 2, they kept one piano specifically detuned called the “Mrs. Mills’ piano” which was used in many Beatles recordings and specifically ‘Penny Lane’.

Snippets of the master recordings of Pink Floyd’s ‘Dark Side Of The Moon’ were played on the original sound desk. He recalled the recording sessions for DSOTM went on late at night. Lots of “found sounds” were used – the running sound in ‘Speak To Me’ was a recording of someone running up and down the corridor in Abbey Road Studios late one evening. Heartbeats were also recorded and used (again ‘Speak To Me’ and ‘On The Run’).

Recordings of the cleaner chatting were used across several tracks. They had to constantly tell the woman singing in “The Great Gig In The Sky” to stop adding “Wooah baby” and ‘Baby one more time” ad-libs and to just wail. The voice of Gerry O’Driscoll’s (doorman at Abbey Road) was recorded and included in ‘Eclipse’ and ‘Great Gig In The Sky’. He then played the clean recording of Gerry saying “There is no dark side in the moon, really. Matter of fact, it’s all dark. The only thing that makes it look light is the sun.” There were lots of “found sounds” used in the recordings – money rattling in bags (‘Money’), brooms used for hi-hats, etc. When talking about other recording techniques, Alan stated that the rims of wine glasses being rubbed were used as organs/pads in  ‘Shine On You Crazy Diamond’ on ‘Wish You Were Here’ and also the “Household Object” projects.

All words by Philip Allen.

All photography by Paul Grace and his website is https://www.paulgrace-eventphotos.co.uk/

More work by Philip can be found in his Louder Than War archive.