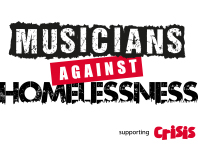 Facebook page for the gigs and platform for new bands to get on the bills.
Its twin aims are to raise funds for the homeless charity Crisis and provide gig opportunities for up-and-coming bands. Shaun Ryder, Irvine Welsh, Libertines, Buzzcocks, Courtney Love Cobain, Black Grape and The Jesus and Mary Chain are just a few of the names supporting the project.

Liverpool indie bands Cast and The Farm will kick-start the campaign with a gig in Leeds this September. Scores of up-and-coming bands are set to take part in similar live rock events all over the UK.
Cast singer John Power agreed to take part after being shocked by the UK’s homeless crisis. He says “Once you slip beneath the radar, it’s so hard to regain a foothold and so easy to find yourself living rough and becoming another anonymous casualty sleeping on the streets.
“It’s a massive modern problem and one we can’t just step over and ignore.
“That is why we’re supporting Crisis, to try and highlight the issue through music and try and raise awareness about the situation.
“Maybe it’s time for us to think about how this government is dismantling the safety net of the welfare system through cuts, and ask them to address the skyrocketing rents people are being asked to pay.
“They should also address the lack of affordable homes on offer to people.
“All of us need to question the stereotypical images we have of people on the streets. Falling on hard times or having a particular run of bad luck is something that could happen to anyone. And if you ain’t got any support when it hits you, you too could find yourself one rung of the ladder away from being homeless and living on the streets. Just a thought.”

McGee, the music mogul who formed Creation Records and manages bands including Black Grape and The Jesus & Mary Chain, sees giving young bands a chance to gig as being just as important as the cause.
He says: “Due to the eternal gentrification of big cities we are losing music venues all over the country, especially in London. Without these venues what chance will new bands, especially working class bands, ever have of gaining the oxygen of experience and learning to refine their craft?
“Inner city redevelopment is killing the next generation of musicians, and very soon the working class artists will be written out of the narrative of rock n roll music.
“Hopefully this project will give a lot of new bands a chance to play and to exist in a place where they can all shine on.”

Cast signed to McGee’s new Creation Management company in January and have recently started a UK tour to support their latest album. The band notched up seven Top Ten singles in the 1990s.
They will launch the project at Leeds O2 Academy on 18th September with fellow Liverpudlians The Farm whose Top 3 hits include All Together Now and Groovy Train.
“Very Special Guests” will be joining them on the bill that night and proceeds will be donated to Crisis.

Musicians Against Homelessness shows will be set up and promoted independently all over the UK with the aim of becoming an annual event.
The shows are endorsed by Alan McGee and will be open to ALL bands and venues who’d like to get involved in their local area.

Ed Tait, Director of Fundraising for Crisis, said: “The support of Musicians Against Homelessness comes at an important time. Homelessness is devastating, leaving people vulnerable and isolated. With rough sleeping rising steeply across England, unfortunately our services are all the more important.”

Gigs will take place over a two week period between 18 September and 2 October and will be co-ordinated by Emma Rule
, a keen supporter and regular volunteer for Crisis who works with unsigned bands.
McGee says: “We are trying to build a new wave of opportunities for young bands.”

To apply to play, manage or host an event in your local area contact mahgigs@gmail.com or find us on Facebook

Crisis is the national charity for single homeless people. Our purpose is to end homelessness.
Homelessness is devastating, leaving people vulnerable and isolated. We believe everyone deserves a place to call home and the chance to live a fulfilled and active life.
Crisis helps people rebuild their lives through housing, health, education and employment services. We work with thousands of homeless people across the UK and have ambitious plans to work with many more.
We are also determined campaigners, working to prevent people from becoming homeless and to change the way society and government thinks and acts towards homeless people.