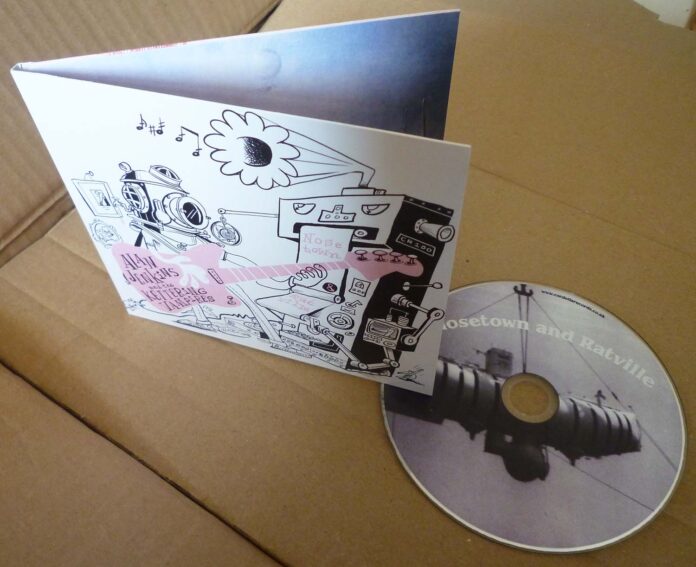 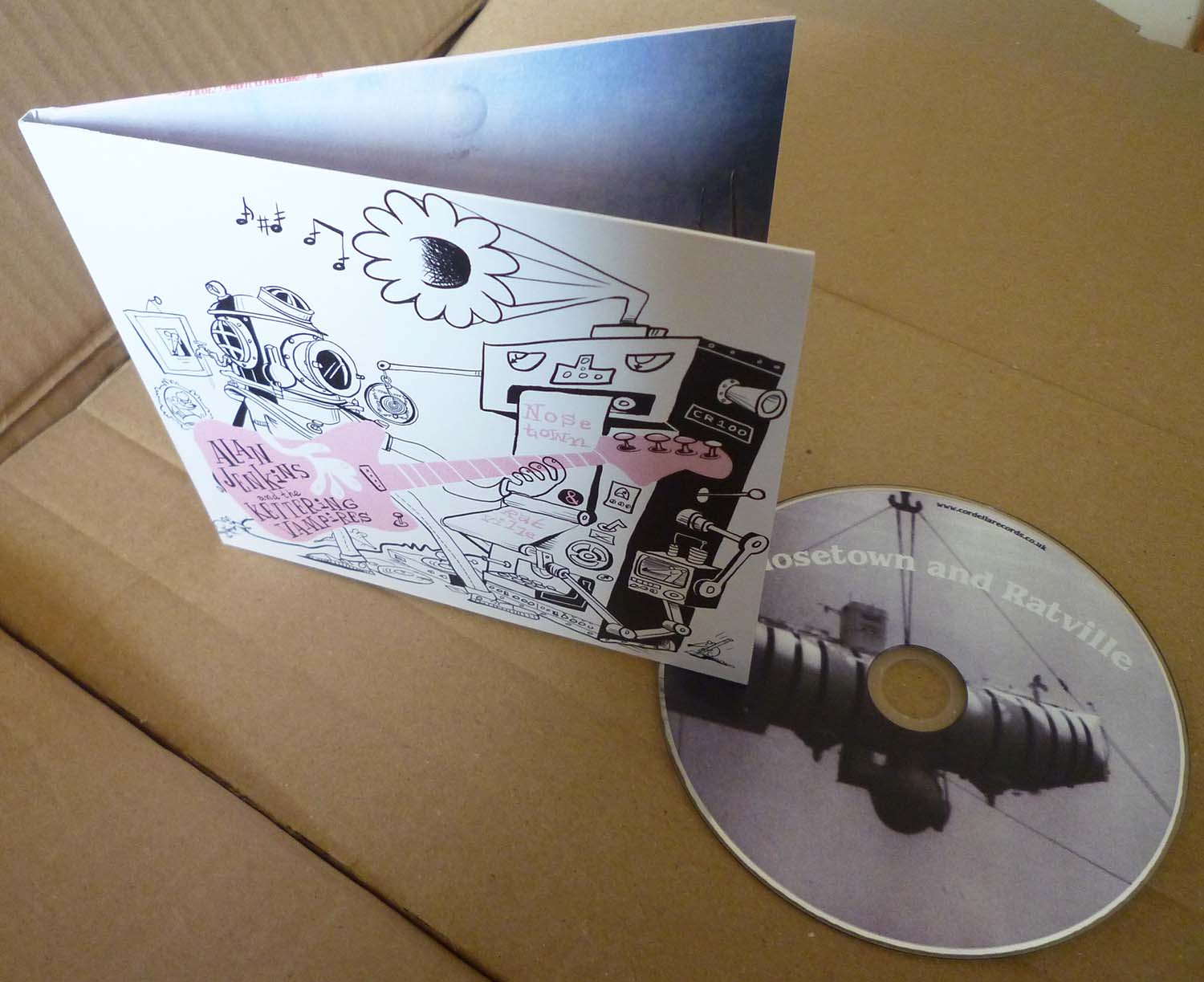 New album by ex-Deep Freeze Mice leader Alan Jenkins along with the backing trio The Kettering Vampires. 15 new tracks including a cover of The Beatles’ Lucy In The Sky With Diamonds in German…LTW’s Ian Canty sticks his nose into things that are none of his business, all over town…

One has to marvel at Alan Jenkins’ industry, even setting aside the wide array of sounds that his various projects explore for a moment. After the two recent and wildly different albums by The Melamine Plates album (reviewed here) and Culpho Dog Gymkhana (reviewed here), he’s back with a new platter, this time made with frequent collaborators The Kettering Vampires. This trio, consisting of rhythm section Neil Ska (bass) and Minnie Bannister (drums) joined by guitarist Lenny Snake, provide the backing to Alan and his guitar on Nose Town And Ratville, with Neil also doubling up on organ.

In a sense this is a follow up to last year’s Onion Light Over Pig Country (reviewed here – I promise this will be the last one!). Nose Town And Ratville finds Jenkins and his cohorts committing to tape a number of typically curious but engrossing tales. He and the Vampires dip in here and there into his own creation, experimental surf music (ESM), as well as psychedelia, musique concrète and even punky new wave along the way, but whatever emerges is forever embossed with their own unique signature.

Nose Town And Ratville gets underway with the busy rumpus of Horse Day, where a slide guitar plays a key part in the musical landscape. It also houses a packed lyric which mentions the album title and also seems to reference The Clash’s Rock The Casbah, Morris Dancing and evil twins in its logical but inventive thrust. Titans Of The Deep follows with deep psychedelic drones and ESM guitar picking, before falling away to what sounds like a telephone call vocal section, after which the song picks up again.

The brief guitar/organ interlude of Cotton comes before the first of two tracks entitled Observations Balloons. The second of which comes towards the end of the album – with organ set to dreamy strings mode and Soft Machine namechecks, the second Observation Balloons is a relatively straight and stately pop charmer. But the first, completely different Observation Balloons, comes in at just under four minutes and has more of an assertive and nicely raucous feel, being far more a buzzing psych rock sound. It has the kind of weird pop appeal that Jenkins regularly imbues his work with – I suppose us fans can draw comfort from the fact that in an parallel universe he’s had more hits than Beyoncé, but a bit of acclaim here would be nice!

I Come From Mars rides in with some prime punky riffing and garage organ, with this real gem being not actually that far away from The Fall’s catchier material. The stuttering guitar shards of No Periscope Will Help You Drive Your Car (never a truer word has been spoken) take front stage over some lively percussion, a moody instrumental that leads us into the short space/ESM of Fly Experiment #1

A question not often asked, What Is Happening In Reasonberg? is nevertheless bright and infectious and posits the notion that flies “at an altitude of 1.5 miles” increase in size. Trebuchets commences dreamily with electric piano and organ drift, this is a more measured piece. It’s a near-ballad really that appears to obliquely explore feelings of helplessness, something that a lot of people may identify with at the present time. The subject of flies looms up more than a few times lyrically on Nose Town and Ratville and Flies itself makes several unsubstantiated claims about their history, including that they were actually invented in 1913 – but the acoustic/electric guitars and keyboards that accompany the song combine to make something that is strangely touching.

Next comes a short combo of tambourine shakes, guitar picking and percussive crashes entitled As If We Were Eating Bagels and that’s followed by Alan And The Vampires off-centre version of the Beatles’ Lucy In The Sky With Diamonds, translated as Lucy Im Weltraum, which comes to an end suddenly. Experimental surf music piece Fly Experiment #2 and the aforementioned second Observation Balloons prefigure the LP’s lengthy closer Q Squad.

Queasy keys and choral effects open things up on Q Squad, with Alan intoning the tale of panic buttons and sinister government departments, like the Q Squad, who apparently are behind the laws of physics changing in residential properties as part of their covet operations. It’s as close as Jenkins And the Kettering Vampires come to a political statement, but is flecked with Jenkins’ trademark dosage of surreal storytelling that renders it fresh and listenable all the way through the ten minutes plus running time. The psychedelic instrumental flourishes on this track are positively thrilling too and it all goes together to form a fitting climax to the album.

Fans of Jenkins’ previous adventures will find Nose Town And Ratville a worthy addition to his rapidly expanding canon. For newcomers, it is also accessible enough to represent a good starting point. But be ready as when you are pulled in, you more than likely won’t be able to go back. I wouldn’t want to either, as we need hugely creative minds like Alan Jenkins and his various associates more than ever. In a world that is being slowly drained of individuality, his unique work remains a very cool blast of colour indeed.