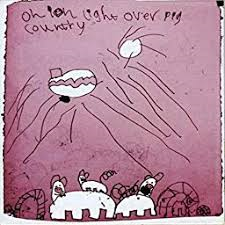 Quickfire follow up to the recent re-recording of My Geraniums Are Bulletproof, which in its original form was the debut album by Jenkins’ 1970’s band the Deep Freeze Mice. This recording however features 17 all-new numbers, including a German language version of the Beatles’ With A Little Help From My Friends… LTW’s Ian Canty see unusual lights overhead, with sounds to match…

Alan Jenkins provided one of the year’s highlights from a highly improbable premise – a re-recording of the Deep Freeze Mice’s first LP My Geraniums Are Bulletproof (reviewed here), which as well as being a whole load of fun also provided a new slant on an old classic. It sets out a good case for Jenkins being a key exponent of present day psychedelia.

He turns his attention on this new record to fresh pastures, ones inhabited by numerical chickens and pigs plus a vast horde or other strange folk and phenomena. His experiments in ESM (Experimental Surf Music), recently heard on the incredible Melamine Division Plates album Novosibirsk (reviewed here), manifest themselves in the guitar sound at various points on Onion Light Over Pig Country. Also long-standing fans of the Deep Freeze Mice will of course find a great deal of his customary strangeness to enjoy, as well as being able to draw a straight line between this new album’s organ-heavy psych pop/rock and that band’s oeuvre.

Jenkins’ trademark halting delivery is brought to bear on a seventeen track selection of modern British psych, including the lengthy but addictive opening song Just One Beep, when he at one point states “I’m Sooty, your Sweep” and later “I’m a carrot, you’re a neap”. But don’t worry, it all makes perfect sense in what is a truly memorable song and it isn’t not alone on that score either. Soundscape piece Utopia Of The Electricians sounds like what Joe Meek might be up to if he was around today, before a savage edit into a eerie and sinister atmosphere take it into more uncharted territory.

There’s also a German language version of the Beatles’ With A Little Help From My Friends, now entitled Wenn Wir Zusammenarbeiten. This rum take also gets a short reprise after the groovy and very cool instrumental How A Man May Sometimes Put His Trust In A Horse, some prime guitar interplay on this.

The Hughes Apparatus asks us whether we would “care for some cress?” among its fast, garage vibe and twisted tale and the following effort This Is A Pipe develops into a mad list song, where chickens and pigs are named mostly numerically whilst the music marches ceaselessly on in psychedelic fashion. Jenkins and his band the Kettering Vampires (Lenny Snake on guitar, keys by Neil Ska and a rhythm section of bassist Karen Lissitzky and Minnie Bannister on drums) create some excellent sounds on this album, sometimes discordinate and noisy, sometimes disarmingly delicate and sweet.

A typical “conversation-style” title That’s Something You Would Have To Ask Phil masks a tune which harks back to the musical style of the early days of new wave for its inspiration. A nice mix of slow and fast sections, with the lyric crisply narrating a story involving Cruella De Ville, social media malpractice and air raid shelters.

This one is followed by the off-kilter blast of Captain Enormous and TL; DR, which flirts attractively with that ESM guitar style during its short running time. Platypus is a nice piece of beaty pop with again some winning guitar-work and Alan and band even come on like a ghostly Tornados on Ted Revolution. Moving towards the very end of this set, 31st August references both the end of summer and the beginning of World War 2 and is accompanied by an irresistible, almost glam drum pattern. The muffled sound and spoken word of I Had Moved It brings the album to a suitably bewildering close.

Put as simply as I can Onion Light Over Pig Country may leave you both baffled and intrigued, but may also have you whistling a few of the tunes too. A delightful enigma housed in a great sleeve which illustrates a timeline that may help to enlighten you to the album’s logic, but probably it won’t. It is lovely to look at though and does grant you some access into Jenkins’ highly individual thought process, at once sharp and uniquely skewed, that is employed throughout the LP. Long may he continue to provide us with excellent mind-twisters like Onion Light Over Pig Country, an ESM-enhanced psychedelic lightning bolt that could see one though many a drab day.