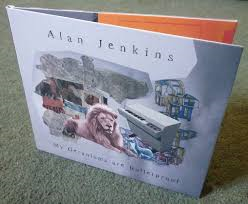 Alan Jenkins – My Geraniums Are Bulletproof

The main-man of the Deep Freeze Mice Alan Jenkins returns with a re-recording of their classic debut album on the 40th anniversary of its original release…..LTW’s Ian Canty hears one of the pioneers of the UK Independent scene roll back the years……

The Deep Freeze Mice were one of the first bands after Punk’s Year Zero to re-introduce a touch of Psychedelia into the New Wave. Emerging in 1979 with the original My Geraniums Are Bulletproof LP, they remained a strictly underground phenomenon, despite a string of consistently imaginative and entertaining albums on their own labels Mole Embalming and Cordelia. After they split in 1989 band leader Alan Jenkins has carried on following his “one of a kind” path, with time spent in the Chrysanthemums and The Thurston Lava Tube among others. The later are part of the Experimental Surf Music genre, something which Jenkins himself seems to have invented.

Anyway, that brings us up to date and now we have this, a re-recording/re-imagining of that first Deep Freeze Mice LP. It would be ludicrous to suggest that in the intervening 40 years things have not changed, indeed Embalming Fluid Future and The Octagonal Rabbit Surplus seemed to have swapped running times, with the former now stretched out to near-half hour length. Other songs have shrunk or expanded a little and I Vote Conservative even finds Jenkins looking back on his youthful, flippant self in a unfavourable light given the havoc the subject of the original song wrecked in the interim, finally concluding with a tangible, righteous anger “you vermin”.

So moving away from direct comparison, what does My Geraniums Are Bulletproof in this new 2019 guise offer us? Well for one it shows that our man Alan is on tip top form, his artistic vision still needle sharp and with a firm desire to remould the Deep Freeze Mice’ first statement of intent into something of relevance in the 21st century. He’s supported by strong musicianship throughout as well, providing a solid base for when things naturally take a stranger turn or three.

There’s hints of his work in the ESM field in the guitar of set opener Minstrel Radio Yoghurt (the original was included on the recent Optimism/Reject comp, reviewed here) and it has a feeling of swirling, ominous thunder about it. Then we’re into I Vote Conservative, a real virulence replacing the gentle send-up of the original.

Emile Zola is a highpoint – a little of the Fall’s cantankerous lurch here and there, shards of guitar busting brightly through and a cool organ line floating atop. Phylis Is A Protozoa is just one of the songs featured here that show how much the likes of Half Man Half Biscuit owe in terms of fast and abstract word play. This one is really infectious and comes with a neat and very tasty guitar solo.

Next we’re into what would have been the side-long song if this was on vinyl, the 28 minutes plus Embalming Fluid Future. After some gentle warp sounds fade in, this starts out as a skanking Reggae song with some authentic Dub effects, before soon delving into Jazz/Rock/Psych weirdness with a squawking clarinet. That fades and we’re left with a suitably “out there” conversation. Space sounds emerge as the voices stop, then footsteps and an organ hum, with the original song making a brief and ghostly reappearance. Then freak out drums, acapella and someone hammering at a door all slip in and out, until the Reggae song comes back to resolve things. It’s one hell of a trip, to put it mildly, but kept this listener rapt where attention tends to wander on these kind of things.

Following something as gobsmacking as that should be difficult, but Jenkins and band breeze in with the pure New Wave Pop nugget I Met A Man Who Spoke Like An UCCA Form, some great drums and bass anchor this one down, with a little of the ESM guitar sprinkled here and there as well. It’s left to the previously huge The Octagonal Rabbit Surplus to end things, now cut down to a svelte 6 and a half minutes. A Punk buzzsaw riff rises, but then stops dead in its tracks. Piano chords clamour, then the zippy riffing comes back with some mostly unintelligible, eerie chants in the background (they sound like “It’s real tonight” but I can’t be sure). A suitably chilling and bracing conclusion to a fine effort.

It’s usually rocky territory when artists recut their own material years on – it really shouldn’t work at all. But My Geraniums Are Bulletproof, in its new form, is a totally convincing 21st century mind-melter, burning Psychedelia for a new age. The Deep Freeze Mice slipped below radar, despite their many strengths, so chances are this will all be new to a great many people. Newcomers shouldn’t fear – there’s loads to discover and oddly enough this version of My Geraniums Are Bulletproof acts as the perfect introduction to the world of Alan Jenkins. In his own words “if it’s worth doing, it’s worth doing again”!