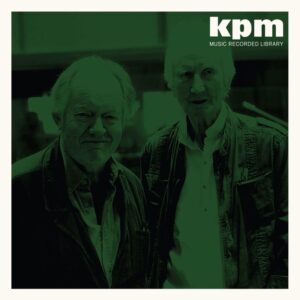 Hammond organ wizard Alan Hawkshaw and The Shadow’s drummer Brian Bennett are responsible for some of the best and most sought after library records ever recorded on the legendary KPM label. From the theme music to well known TV programmes Countdown to Grange Hill, Grandstand to the Wimbledon Tennis Theme and Mastermind, Alan and Brian are the best musicians who you have heard but you didn’t know. Confused? Matt Mead reviews their new album Full Circle released via Be With Records for Louder Than War.

From rap artist Drake using Brian Bennett’s drums from 1975 KPM album Summer Sixteen to Alan Hawkshaw organ being used by all hip hop major names, Alan and Brian are true musical Gods to those that know their names and to those that don’t, but have no doubt heard their music.

It is with this hefty reputation that Alan and Brian have decided to release a new album Full Circle which comes in the classic green KPM sleeve and retro sleeve notes. The big question for me was; would the duo be able to capture the essence of their previous material of funk break beats and scorching Hammond organ riffs or would the duo sound like Cliff Richard’s 4,231st album. Thankfully the latter doesn’t apply.

What we have here is another masterpiece of library music gems. Flying kicks off proceedings here with soft sultry tones, this wouldn’t go out of place as the new Tales of the Unexpected theme, lovely. Hole In One you can imagine a 70’s detective series picking this up with Michael Caine running after Alf Roberts on top of a multi storey car park. You catch my drift? Reignited is a full on Meters funk track, you can imagine James Brown getting deep, down and funky with this tune. There are further funky delights to wrap you in bundles of gorgeous Hammond licks here. Straight Up is a perky Hammond stomper from an imaginary car chase scene. Serengeti should feature in the next James Bond romance scene. Forget your Adele’s, this is the music for you Bond, James Bond. One of the final tracks Oasis has nothing to with manc swagger, far from it. Imagine African heat, palm trees with a man playing a vibraphone and a tropical drink with an umbrella on top and you’re there. The album also has lush orchestration, Memphis horns and fantastic crystal clear production, as you would expect from any KPM related release.

A quite stunning album from 2 of the kings of library music that will fit in very well with their back catalogue. Alan and Brian will possibly perform tracks from their new album plus other well-known tracks at a KPM All Stars gig on Saturday October 6th which also coincides with the premiere of The Library Music film on the same day, all of which is a complete sell out.