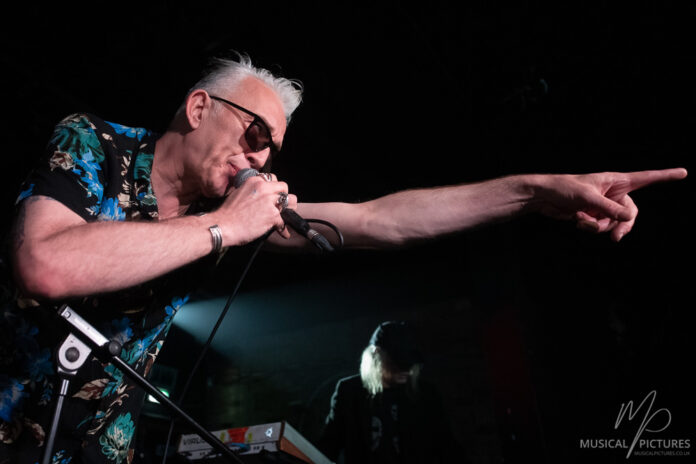 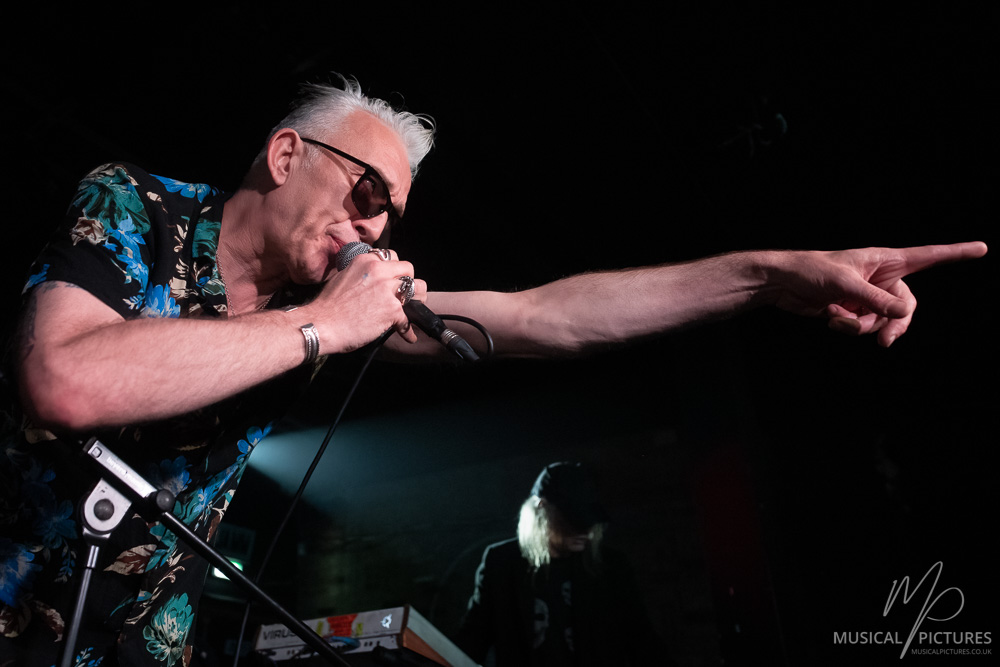 Tonight’s Alabama 3 gig will be my full first foray out into the breath and sweat of the dance floor in about eighteen months, and for the last week I’ve wrestled internally about the prospect of getting ill or passing on any illness.

I’m not sure if I’m a fool but the ‘fight or flight’ urge is strong in me as I approach the gated entrance to Jamm’s outside area, I feel myself subconsciously checking the crowd size and scanning for signs of the virus. But as I let the security man at the door pat me down, it’s too late and the relief of acquiescence falls over me. It must be safe. I get into the water the way a wildebeest crosses the crocodile infested river, I guess I let my herd instinct take over. I’ve arrived just as the band takes to the stage – there are of course a couple of people in the packed audience with full respiratory masks and goggles, reminding me of extras from Mad Max, but not a single blue medical mask in sight. 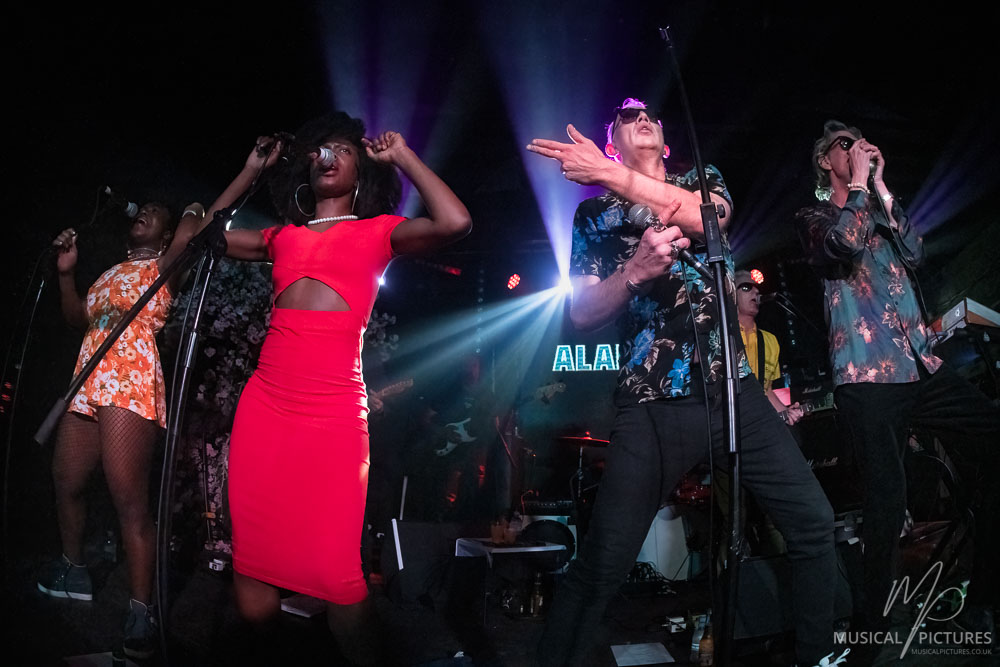 Alabama 3 were formed by the Glaswegian/South Wales partnership of the late Jake Black and frontman Rob Spragg in the ‘90s underground squat and party scene of South London, and this week they are playing three nights at Jamm in Brixton to introduce their new album Step 13 to their home crowd. Their opening number Whacked, also the first track of the new album, starts – driving and powerful with Nick Reynolds’ harmonica searing high above Alan Ashton’s pounding bassline. I look out across a sea of smiling punters, heads bobbing, hips swinging as Spragg sings out “Everybody’s getting whacked on something”. Hands in the air, his voice is melodic, rich and full bodied, topped perfectly by Ese and Sheena’s beautifully smooth backing vocals and the creamy blues licks of Mark Sams’ and Steve Finnerty’s guitars. 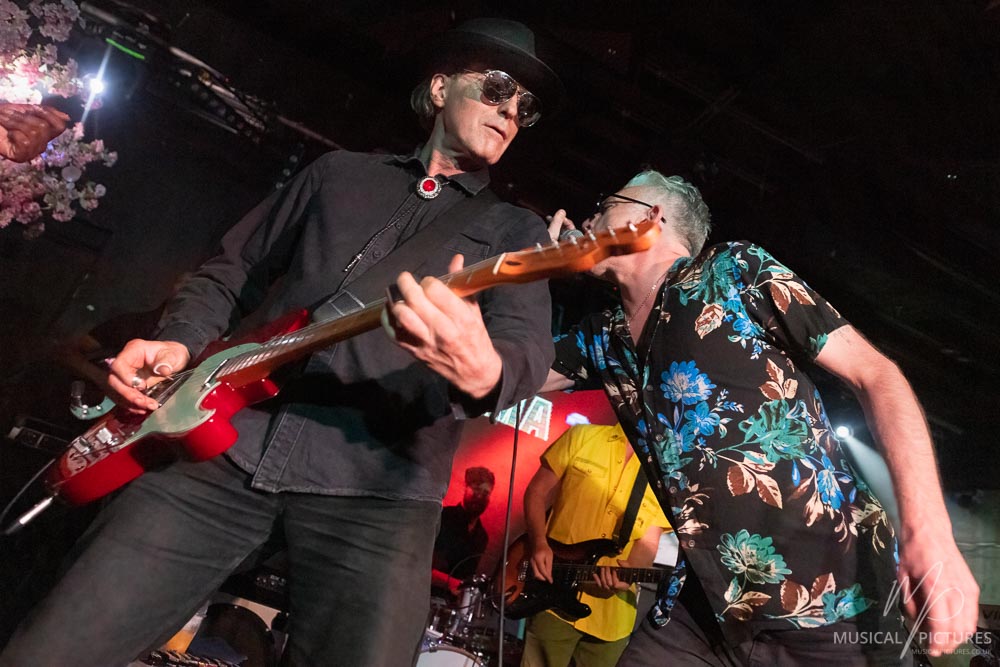 Their classic catalogue is in abundance tonight with Peace In The Valley and Hello I’m Johnny Cash particularly shining out for me – and it was with a wry smile that I recalled rediscovering my love for Woke Up… whilst binge watching all six series of The Sopranos in the early part of lockdown.

After Jake died, the band toured their debut album Exile On Coldharbour Lane in an attempt to exorcise their grief. They were preparing material for their thirteenth album when COVID happened. “We were still grieving for our dead pal, then the whole fucking planet’s gone tits up! We just thought, ‘Fuck it we’ll do it virtually’” recalls Spragg.

The new material – Whacked, Yolanda and Petronella are powerful, sharp and self assured with Spragg vocally on top of his game, while lyrically “exploring the Brixtonian netherworld of BLM, drugs, politics and ‘posh birds slumming it’”. He’s also hilariously funny at times, joking with the audience and gives the show a celebratory, party feel. However, completing songs that he’d been working on with Jake before his death presented Spragg with various dilemmas; “What my best pal gave me was an opportunity to really write my way through it”, he says. “I miss him dearly but I’m not gonna hold back and not let people hear them, no matter how uncomfortable”. 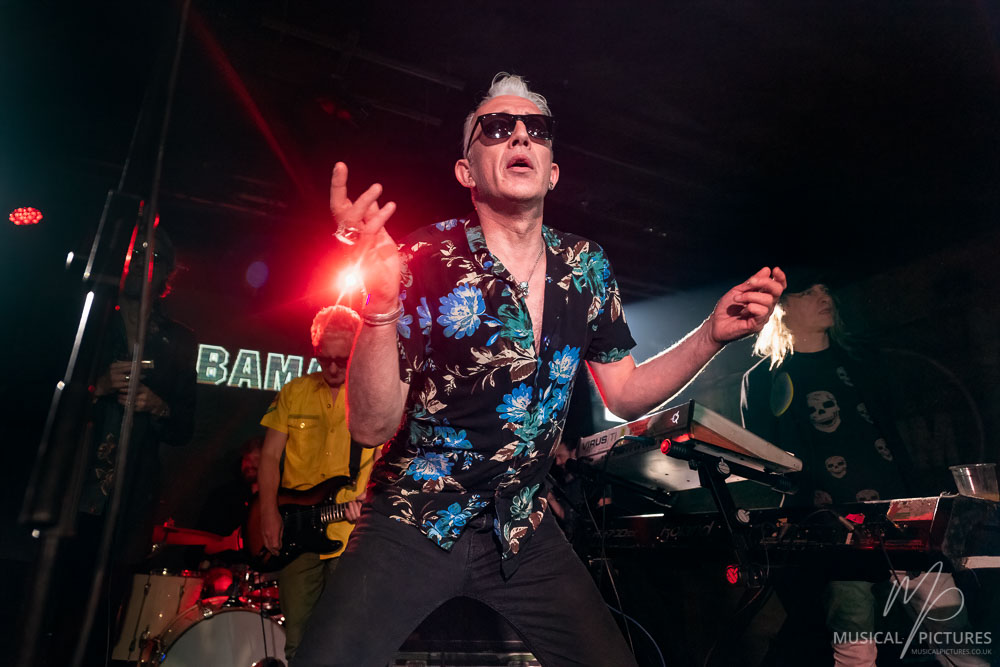 The bluesy and introspective Night Tripper In The Trap House features Jake’s vocal and documents the last moments of his life via what Spragg calls “the symphony of bleeping life-support machines, recorded at his hospital bedside, gradually switching themselves off as Black breathed his last”.

In his 1967 book The Ghost In The Machine, Arthur Koestler developed the idea that as the human brain has evolved, it has built upon earlier more primitive brain structures and at times these older structures can overpower higher logical functions and are responsible for hate, anger and other destructive impulses. Tonight my internal conversation is telling me that, perhaps while I’m in constant danger of mixing my metaphors, their friend and bandmate Jake, an immensely articulate and intelligent man, will be indelibly etched on the hearts, minds and material of Alabama 3 – our Mate In The Machine as it were – and that’s not a bad thing.

The new album Step 13 is out on 24th Sept via Submarine Cat Records. For more info: The Alabama 3