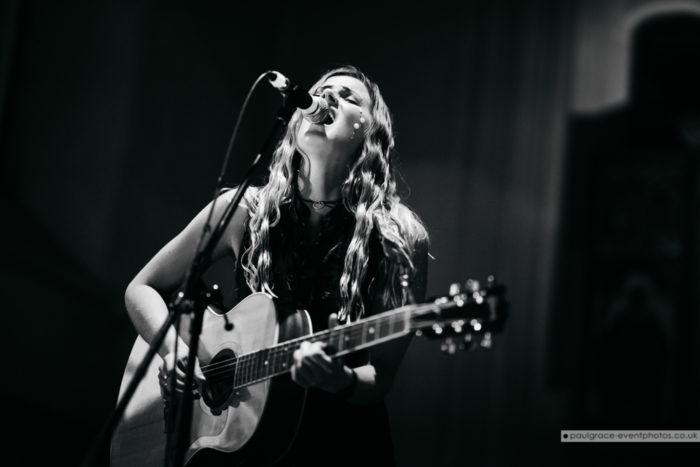 AK Patterson plays an intimate launch party for her new single and impresses with a unique twist on folk.

St Pancras Old Church is not your average music venue. In my days of being educated by the Christian brothers, anyone caught leaning against a church wall just beneath religious paintings and inscriptions, would have been accused of possession and received at least six lashings. Here, however, it’s just a comfortable way to enjoy a gig.  And while this beautiful, historic building is still very much a fully functioning church (with notices of forthcoming services on display in the foyer), tonight it has been taken over by a Brighton-based singer who has been dubbed a woman possessed while in mid-performance herself.

Following appearances at Latitude, The Great Escape, Dot To Dot and the Cambridge Folk Festival earlier in the year, tonight’s concert is a celebration of AK Patterson’s debut release – Shadows. Accompanying the singing guitarist are Nat Reading on cello and Alfie Weedon on double bass and backing vocals. As the trio kick off their set with the EP’s title track, it becomes clear how well Patterson excels at merging the traditional with the modern. With a melodic sensibility and feel that wouldn’t be out of place in a traditional and mournful folk song, this haunting first offering is brought into the 21st Century with vocals that recall Bjork and subtle yet effective Eastern influences. And, yes, with her eyes closed and vocals at full tilt – the Cambridge-born singer gives the appearance of someone under a demonic spell. The beast that inhabits her is given no respite, however, and the track Greed showcases a ‘Jeff Buckley Meets Ella Fitzgerald’ vocal delivery alongside guitar and bass interplay that wouldn’t have been out of place on Joni Mitchell’s Hejira album. Dispensing with her Gibson acoustic in favour of a Fender Telecaster, the country-tinged It’s Not Over Till They Cry sounds the way a David Lynch film looks and feels. The catchy Nora Jones-style topline melody is the Lynchian white picket fence to the troubled house that it guards song and lyrics. Taking on a slightly darker feel than its recorded version, even bassist Weedon’s slide whistle solo creates a sense of pathos. Which is not easily done with that particular instrument! 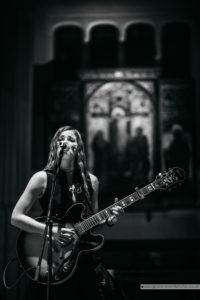 Patterson returns to her acoustic for Buildings, a song about life in the big smoke, which eerily ends in perfect time with the random ringing of the church’s bell. And a fitting final note especially when considering the song’s theme. Putting his cello to the side, Cause For A Beating Heart features the raunchy clarinet of Reading. This seemingly polite and jovial reed instrument, famously associated with Gershwin’s Rhapsody in Blue, takes on a more sinister yet varied guise in Reading’s skillful hands. And, clearly taking note of her two talented musical partners in crime, the singer announces that “WE are AK Patterson” before launching into the beautiful and Celtic tinged Lady Grayling. Donning an Epiphone double cutaway electric for A Woman’s Word, the closing track of the set, the feel of the trio heads into a slightly Tom Waits direction with Patterson’s vocals occasionally taking on a ‘speaking in tongues’ feel in places.

Returning for an encore, the singer recounts her recent experience of playing Cambridge Folk Festival and seeing a memorial bench for one David Howell Patterson, her grandfather, while up there. She dedicates The Parting Grace to him before the group finishes their encore by going completely unplugged and setting up directly in front of the stage. All leads removed. Every microphone left behind. Brandishing a fiddle, and alternating between pizzicato and bow, Patterson and her band performed Fujin which was met with a standing ovation and loud applause. 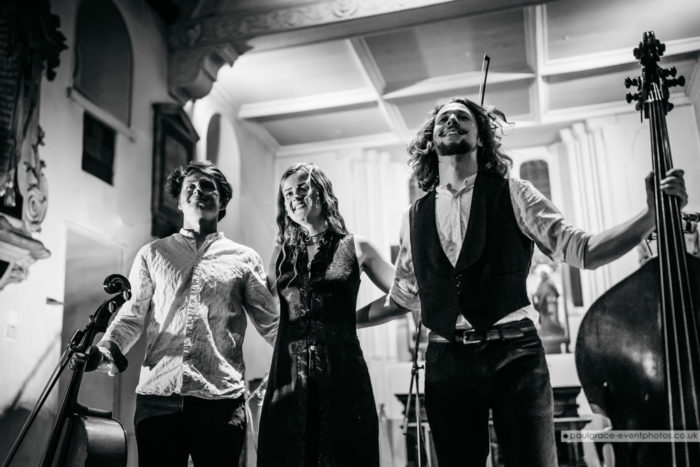 Equal parts menacing and captivating, it’s easy to get lost in the notion that AK Patterson is indeed a woman possessed. But when she thanks everyone for attending and oozing kindness, however, it’s clear that it’s passion rather than demons or spirits that possess the performer.