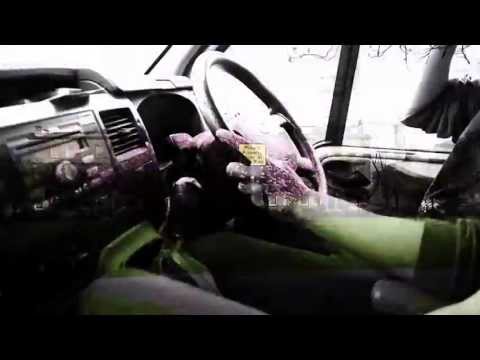 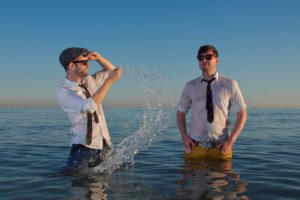 Cynics may point at two piece bands and accuse them of being two piece bands because they don’t have any other mates who want to join in. AK/DK couldn’t fit a third person on this stage even if they tried.

Up there on the tiny three-inch stage it’s like the inside of a submarine (which, incidentally, wouldn’t be classified as a “good ship” but we’ll brush over that).  I’ll try hard to describe what we’re looking at here; behind the two drum kits, the piles of Analogue Keyboards (AK) and Digital Keyboards (DK) it looks like dozens of knobs stuck to the inside of a large suitcase with loads of wires protruding from every angle linking whatever this is at the back to whatever this is between the drum kits. Meanwhile, two men hammer away at their kits, simultaneously pressing buttons, bouncing up and down and holding things towards their mouths to scream in. You can tell that some bands are about to be cool just by looking at the stage before a note (or a sound) has been released.

AK/DK are off to a good start.

Sonically, this is the stuff we’ve been used to receiving from far away places like Canada (Holy Fuck) or the big apple (Battles) but recently we’ve also experienced a similar assault from ‘local band’ Factory Floor. Half way through the evening it’s pointed out that the first time our ears came close to AK/DK was pre-Factory Floor’s self titled album which I feel explains why one or two of us were wondering why that LP was sounding a little too mellow during the first few listens (we love it now we’re used to it).

AK/DK are wonderfully brutal at times. Hissing, bleeping, buzzing, distorted layers of sound that have the audience in this small venue captured from the off and nodding agreeably, appreciating each song’s ending with gasps of delight at the ridiculously brilliant discipline we’re witnessing. A lot is probably improvised and this is why it works so well – dance music that will eventually appeal to the masses we see inhabiting the big tops at three o’clock in the morning during the festival season (along with the aforementioned Factory Floor) – hopefully this will happen sooner rather than later. If, like the hardy folks here this evening you’re partial to the odd slice of the bands mentioned above check this out…..

By the way the Analogue Keyboard/ Digital Keyboard bit I made up, I have no idea what their name means and I doubt they do either.

They should have an album out before the summer.

Consider this a recommendation.

All words by Keith Goldhanger, find his Louder Than War archive here and Twitter