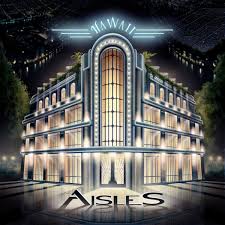 Progressive rock is alive and well in Chile!  And in a truly progressive fashion, Aisles’ new album is a double disc with a full on futuristic concept. Despite the fact that they’re not overly at ease with the  prog label, preferring  more of an ‘art rock’ presence, they’re more than happy to make some healthy networking ties with the progressive music community.

Their fourth album finds them building on  2013’s conceptual work ‘4.45am’. It’s a giant undertaking, based around the sci-fi-ish theme of human colonies in space, established after the destruction of Earth. Twelve tracks explore the dilemmas and challenges of such a scenario. Guitarist and producer Germán Vergara has called it “Our most profound work so far. With ‘Hawaii’ we dug deep in search of a concept that could really move us. Our objective was to write music that would emotionally and mentally take us to the place where the events in the album occur: Space”.

Compared with what Dream Theater have recently done with their (over)long and frequently indecipherable ‘The Astonishing’, ‘Hawaii’ is a much more palatable and surprisingly concise piece of work. At almost an hour and a half, it’s much more condensed and immediate – accessible even – although the story does have its complexities and minutae which fans will enjoy exploring. Any confusion? Well you can check out the glossary which defines the single  ‘Club Hawaii’ as being one of several bohemian clubs which celebrate life on the extinct planet Earth. A bit like ‘Back To The Future II’s Café 80’s. There’s even a gramophone (also defined in the glossary) and vinyl!!

There’s also a key character ‘The Poet’  to whom the opening quarter of an hour is dedicated, as the tale is interwoven through instrumental passages which ebb and flow. There’s an  atmospheric cosmic tinge of a  ‘space’-y vibe – not dissimilar to the sort of arrangements and sound The  Flower Kings go for – and an  combination of the more direct shorter passages  with the longer pieces, their  extended instrumental sections allowing not so much indulgence but more experimentation in decorating the ambience with some intricate guitar and heavier riffing.

The dreamy and echoey sound of the galaxy is epitomised in ‘Year Zero’, all treated guitars ringing in the void before a throbbing sequence leads into the piano led piece that is the dialogue  between ‘the old’ and ‘the new’ in ‘Upside Down’. Along with ‘Pale Blue Dot’ and ‘Club Hawaii’, it represents the a conversational style to the lyrics, the former clarifying the contrast in the attitudes of the pessimism and negativity of the old (in the repetition of “we always go down”)and the hope and optimism of the new.

The second half/part/act  of the album is more low key and reflective, leading to the climax of ‘Into The Probe’. Quite a sad moment in all reality –  a tranquil ending as it crafts the thoughts of volunteers on an interstellar journey in search of a new Earth from which they’ll never return. An ultimately fruitless mission – “will you ever know I found us a new home?” a key question and one that for all the hope on the record, is destined to result in failure.  And ultimately an album which is gently ambitious, taking on and bringing their  concept to fruition without overtaxing the listener.

Listen to  ‘Upside Down’ from the album here:

You can listen to more at https://soundcloud.com/aislesproject

and they have their own dedicated YouTube channel here