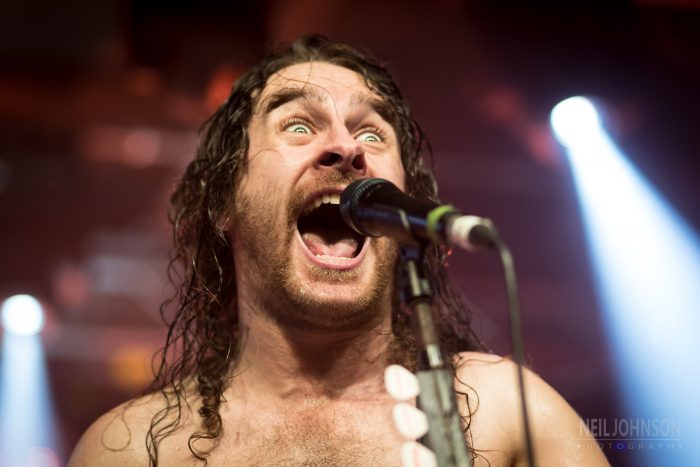 Airbourne seem to have been on tour forever, they are without a doubt one of the hardest working bands in rock. But this is a special night, the very last night of the UK leg of their tour and their last night of the current tour in total. Nottingham Rock City is absolutely rammed from early doors, leather and denim are the fashion order of the day, leather on leather, denim on denim or any combination of the two as long as it is also matched with a black t-shirt. Everyone is friendly, despite the weather outside being less than pleasant. 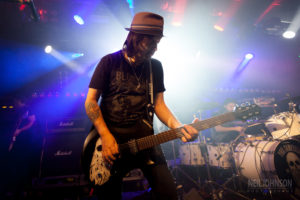 Tonight’s support are The Wild and Phil Campbell and the Bastard Sons, both of which are on fine form, especially Phil Campbell and co, who run a storming set and finish with Motorhead’s Ace of Spades, surely no better way to end a set?

Airbourne hit the stage to Ready to Rock, which the crowd have been singing in unison ever since the big displays were switched off at the front of Rock City, which usually signals that the band are about to come on. The band must be exhausted after such a long tour schedule, but you wouldn’t know it based on the energy levels from the band, everything is turned up to 11 from the first note.

They move on with the groove-ridden I’m Going to Hell for This and then into the epic Too Much, Too Young, Too Fast which is a proper crowd pleaser. Three songs in and Airbourne smashing out the back catalogue with brutal precision. There are no fillers here, just slab after slab of raucous rock and roll, with the occasional bit of Aussie banter from O’Keeffe encouraging the Rock City crowd to live for today and fuck tomorrow, nobody seems to complain!

The show continues without the slightest lapse of brutal energy. The Airbourne live show is like a juggernaut, once it’s moving it’s not stopping for anyone. They do pause for a little while to dedicate Stand Up for Rock ‘n’ Roll to Lemmy Kilmister and Malcolm Young, but it’s a short pause before both the band and Rock City crowd are back into it.

For me, the highlights were Too Much, Too Young, Too Fast and Runnin’ Wild, which they finished the show with, both of which were delivered with the energy and attack that they needed to really drive home.

Overall a masterclass in how to put on a hard rock show, no fuss, no nonsense, no filler, just a gigantic brutal slab of rock and roll. This was my first time with Airbourne, but I’ll definitely be back the next time they pass through!