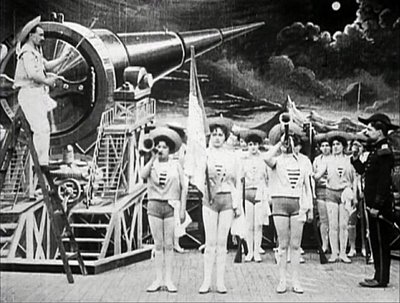 Georges MÃƒÂ©liÃƒÂ¨s was one of the pioneers of early cinema. His 1902 masterpiece Le Voyage dans la Lune, the first ever science fiction film and the first film ever to use special effects, has been lovingly restored in colour and given a new score by French electronic giants Air. We were lucky enough to get a copy of the film and soundtrack album, which Liz from Back Street Indie has written a brilliant review of. Here’s what she thought.

It is now 110 years since 1902, when George MÃƒÂ©liÃƒÂ¨s released the silent film La Voyage dans la Lune (A Journey to the Moon). The production and release of this quirky masterpiece was a hugely significant moment in cinematic history; largely regarded as the first ever sci-fi film to be made, MÃƒÂ©liÃƒÂ¨s stunning use of multiple exposure and time-lapse trickery resulted in a film that wowed audiences around the world and earned MÃƒÂ©liÃƒÂ¨s the affectionate title of “the cinemagician”Â; MÃƒÂ©liÃƒÂ¨s really was the Spielberg, the George Lucas of his day. Originally proposed in black and white, hand-painted colour frames of the film were known to have once existed. It wasn’t, however, until 1993 that these unique coloured frames were found, albeit in a terrible state, in Catalunia, Spain. Since 1999, the frames ”â€œ all 35,375 of them ”â€œ have been painstakingly restored by Foundation Groupama Gan and Foundation Technicolor, allowing a whole new generation to discover the magic of MÃƒÂ©liÃƒÂ¨s. And to celebrate the re-release at the Festival de Cannes in 2011, it seemed only right that they were to ask Air, those pioneers of electronica-sonic sci-fi, to compose a fitting soundtrack.

The film, made in the image of H.G. Wells and Jules Verne, is all about a group of astronomic pioneers who venture on a magical, exploratory journey to the moon in their very own hand-built spaceship. The journey is perilous, however, and it’s not long before the adventurers encounter an apparently hostile group of eerie beings whom they are forced to fight of with nothing more than their dashing French umbrellas… yes, it is as mental as it sounds. But it’s also quite brilliant, and the perfect project for ardent sci-fi fans Jean-Benoit Dunkel and Nicolas Godin, aka Air to work thier musical magic.

The film opens with a group of scientific fellows in wizard-like hats, all congregating in what appears to be a church-like setting. The group listen attentively to the chief scientist who sets out his pioneering plans to journey to the moon and Air accompany this with the aptly titled ”ËœAstronimic Club’, which also serves as track one on the album which this soundtrack inspired. It is a dark, surreal song with low heavy guitars and loud, slow drum beats. The drums, which sound like some sort of apocalyptic call to arms, work eerily well against the weird dystopic voices that echo throughout the track. Representing the confused chatter of the space pioneers, the voices are eventually drowned out by the superimposition of the dark, distorted and muffled voice of the chief pioneer. As he sets out his new ideas for space travel, we are treated to an eclectic array of startling synths, gentle-astral xylophones, low screeching bass lines and animalistic voices. And that’s just for starters. Bizarre radio tune-in noises, violins and a electronic shooting sound (think 1980’s Star Wars arcade game) all follow, leaving us in no doubt that Air have moved well away from their typical electro-dance style into, quite literally, a very brave new world of sorts.

The opening track for this film would always prove difficult for two reasons. Firstly, very little happens at all in the first four minutes of the film. Secondly, the opening was always meant to have an actual narrator in the cinema, explaining what was going on. Air chose not to have any dialogue at all, instead building what they described in a recent interview for Drowned in Sound with Louder Than War’s very own Dan Lucas as “layers upon layers”Â of sound to create that sense of roominess. Air do their very best on this track to create delicate sonic intricacies that elucidate meaning in MÃƒÂ©liÃƒÂ¨s film, but it’s not immediately apparent that such a strange cacophony of sounds like that on ”ËœAstronomic Club’ altogether work. As a stand-alone album track, it’s a difficult listen. It does work better alongside the film, but it is still, somehow, not quite right. It feels like a song that’s trying to be a bit too clever for its own good.

Happily, once the awkward opening is out of the way, music and image marry much better. The spaceship is built by the pioneers in their backyard and it’s not long before they are ready to be shot out of a cannon and into the eye of the moon (yes, this is really how it happens). For 1902, considering what little technology existed, it was quite stunning how MÃƒÂ©liÃƒÂ¨s created such an effects-laden masterpiece; the cinematic tricks in this part of the film are a definite must see. Air once again impose strange muffled voices (like the audience chatter on Sergeant Pepper, only weirder), before the heavy drums and low bass of the song kick in. 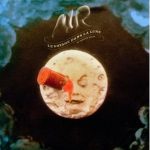 The Sergent Pepper reference here is not accidental. The brilliant restoration of the frames reveals an array of psychedelic colour on characters that wouldn’t look out of place on Carnaby Street, and indeed, psychadelia becomes a eventual theme of the soundtrack to this album. For now, Air choose to match the ascent to the moon with the well-paced piano crescendo and angelic choir that make up ”ËœDÃƒÂ©colalge’.

The stunning track ”ËœLava’ is used as the exited pioneers see the sun rising in their new land. The angelic choir on the song works well, adding a transcendental aura to a track that oozes Portishead-like grace at the onset. Yet a minute or so in, and sounds the unexpected pluck of a banjo string, turning a quite beautiful song into a moment almost comedic. MÃƒÂ©liÃƒÂ¨s himself adds many humorous moments to the film, and it feels a bit like Air are trying to do something similar with this track albeit a bit clumsily. It ventures into a completely bizarre direction ”â€œ the 1980’s arcade guns are back ”â€œ together with a kind of synth wind-orchestra which drives the song towards it’s uplifting crescendo. The song works well on the soundtrack but feels a little misplaced on the album as the closing track.

The pioneers settle down for the night under an embodied sky, which includes both weird smiling stars and an annoyed pair of planets who decide that the unwanted pioneers need a good dusting of space-snow to move them on. ”ËœHomme Lune’ is the short track Air include here, and it is a song drenched in twinkling harmonies and ethereal synths. The pioneers then start to adventure, and the fast-paced song ”ËœSonic Armada’ bursts open to accompany the most exciting scene in the film – think Arthur Conan Doyle, Lost World. One of the strongest tracks on the album, it’s full of 60s inspired psychedelic harmonies and aggressive guitars and a low pulsating bass help to reflect the violence of this scene. It’s not long before the pioneers encounter the moon-locals, killing them off, one-by-one in a bid to survive. Ultimately, MÃƒÂ©liÃƒÂ¨s film is an allegorical tale about the evils of the vast colonization that was taking place at the time. Air capture this metaphorical brutality well in ”ËœSonic Armada’, and it is undoubtedly a great listen.

Eventually, the intrepid explorers are forced to make a quick exit, and the journey home is fantastical. It involves a pioneer pulling the space ship back to earth with a piece of string, anchor like, complete with moon-inhabitant clinging to the space ship. The pioneers arrive home safely to the sound of next great offering ”ËœParade.’ The welcoming celebratory bells on the track are quickly subsumed by big-beat loud guitar electronica together with a delicate ethereal background choir. The track works well both on film and album and it again lends a clear nod to the ages of psychedelia. As they said in Dan’s interview, “the colour version [of the film] reminds me of London in the 60s, it’s like the cover of Sgt. Pepper, so I think a lot of the music has been inspired by this era; it was the mood we were in, what we felt when we were watching the movie.”Â

Crucially, the album can work without the film, although for me only after a few listens. The sound on this album is so completely removed from the electro-dance we are so used to listening to with Air, fans new and old may struggle at first. Instrumental tracks ”ËœMoon Fever’ and ”ËœCosmic Trip’ are solid compositions and make you feel as if you are in fact joining the duo on some sci-fi journey into electronica space travel. ”ËœSeven Stars’ features Beach House’s Victoria Legrand, and ”ËœWho am I now?’ has vocals from Au Revoir Simone; both are well-placed album-only tracks, the former being the stronger of the two. Angelic vocals and experimental synths contrast well against the heavier tracks of ”ËœSonic Armada’ and ”ËœParade.’

Dunkel and Godin are no strangers to soundtracks nor sci-fi. Air wrote the soundtrack to the 2006 Sofia Coppola film Marie Antoinette, and contributed tracks to both Lost in Translation and The Virgin Suicides, all to critical acclaim. And when it comes to sci-fi, you need look no further than their impressive debut, Moon Safari, for space travel themed musings. Le Voyage dans la Lune is an impressive amalgamation of the two. The music, for the most part, accompanies the film well and most tracks on the album can work alone. It does, at times, feel a little scratchy and jumpy like the original frames of the film itself, but this is perhaps the point. No, it’s not perfect, but then again some of the most beautiful and pioneering art is born out of imperfection… just as it was back in 1902.