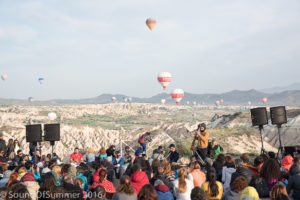 Last week Alan Ewart attended Cappadox festival in the Cappadocia region of Turkey.  Whilst there Alan caught up with festival organiser Ahmet Ulug of Pozitif Live to talk about the inspiration behind Cappadox and his plans for the future.

Ahmet is a co-founder of Pozitif Live and founder of Cappadox festival.  The organisation is dedicated to promoting and delivering diverse live music and entertainment experiences that unite and engage fans, artists and brands. Pozitif Live’s legendary arena concerts, shows and festival platforms bring together multiple segments of multi-national live entertainment at all ages. Ahmet, his brother and his friend were studying in the USA when they saw experimental jazz legend Sun Ra perform, they were determined to bring Sun Ra to Istanbul.  Sadly they found that the Turkish Department of Culture were not interested in their proposals so they decided to do the job themselves and Pozitif Live was born.

Since then Ahmet says that Pozitif has grown to become the lead promoter of international music and family entertainment events in Turkey.  They managed to attract acts like Rihanna, Lady Gaga, Red Hot Chili Peppers, U2, Metallica and Cirque du Soleil to Turkey. Pozitif Live has also established Turkey’s oldest and longest-running festivals in rock, pop, alternative and jazz music, including Akbank Jazz Festival, One Love, Blues Festival and Mono Festival.

Ahmet has always had an interest in avant-garde jazz and has always wanted to put on a festival with a strong connection to nature.  After scoping out the area around Uchisar, a natural gem located in Central Anatolia, Ahmet knew he had found the perfect place to mix music, art, culture and wellbeing with nature.  Cappadox festival is the result. 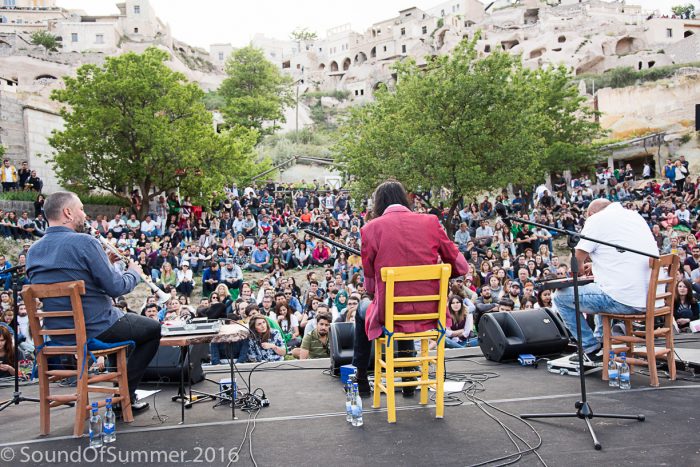 Ahmet says “a key feature of Cappadox is that every aspect of the festival needs to reflect and compliment the natural wonders of nature.  We also want the music to reflect Turkey’s position as the melting pot of humanity that it is, we want to promote the diversity of Turkish music and culture.”

Cappadocia has one of the most striking geographies of the region – characterised by ‘fairy chimneys’ and cone-shaped rock formations and Cappadox makes the most of the location.  Music stages are all placed in locations that reflect the geography of the region and this allows Cappadox fans to enjoy music in stunning natural surroundings.  It was wonderful to see that fans treated nature with respect, I saw none of the discarded filth that is so typical of some UK festivals.

Ahmet explained that respect for the environment is a key component of Cappadox festival.

“We aim to grow Cappadox into a major international cultural event over the next four to five years.  This years festival has attracted twice the number of visitors as our first edition last year.  The festival will have a unique theme each year and we want to grow organically year on year.

“We can’t expand much beyond this years numbers without introducing camping because this year the hotels are all full.  In an area as delicate as this we need to ensure that everything works in harmony with the environment and that we leave no damage behind.  We are also very keen to attract local residents to attend the events.” 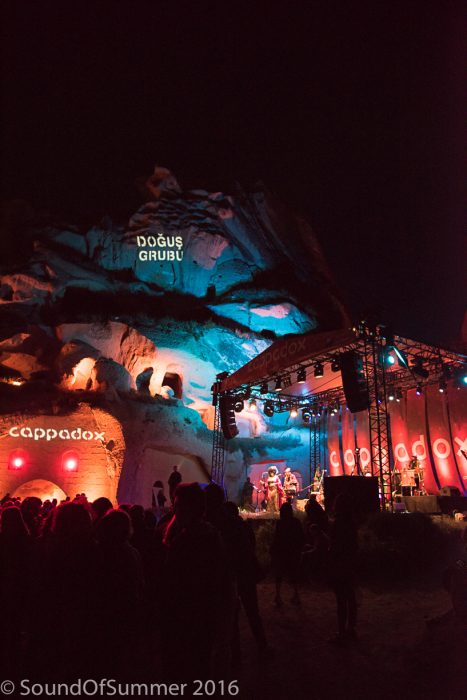 I was keen to know how Cappadox has been received by those living in the area and whether or not the Federal and Regional Government had supported the festival. Like much of rural Turkey, Cappadocia is after all religious and conservative but Ahmet says he has had nothing but support from local people and politicians but they have never approached the Federal Government for any kind of help.

As Ahmet talks you see a man of passion, vision and belief in what he is doing.  His dark eyes are on fire and his voice burns with enthusiasm as he talks about Cappadox and in one sentence he sums up just why this project is so important to him and the whole team at Pozitif Live.  “We do it because it is worth doing” he says.

Ahmet has realised that he has a tough job ahead as he seeks to attract more international visitors to Cappadox.

“We aim to draw a big international audience and that is difficult in the current political climate.  Visitor number in Cappadocia and in Turkey have dropped off as a result of fears over bombings.  Of course the reality is that after Paris and Brussels people should see that there are risks everywhere.”

“We will also need to bring in bigger name international acts if we are to attract more international visitors.  Arcade Fire, Tiger Lilies and Tom Waits are acts I would desperately love to bring to Cappadox.”

For me Cappadox is already a top class festival destination but you have to believe that with his drive, determination and belief Ahmet Ulug and the team at Pozitif Live will bring the dreams to reality.

Cappadox and Cappadocia have so much to recommend them to culture buffs and music fans alike.  Mind you the natural landscape alone is worth the visit.

For more information about Pozitif Live check them out on the internet here, on Facebook and they Tweet as @pozitiflive

Ahmet Ulug was talking to Alan Ewart. Photographs by Alan Ewart: you can follow Alan on Twitter at @soundofmysummer or on the internet at soundofsummer.org and you can read more posts by Alan at his Louder Than War author’s archive