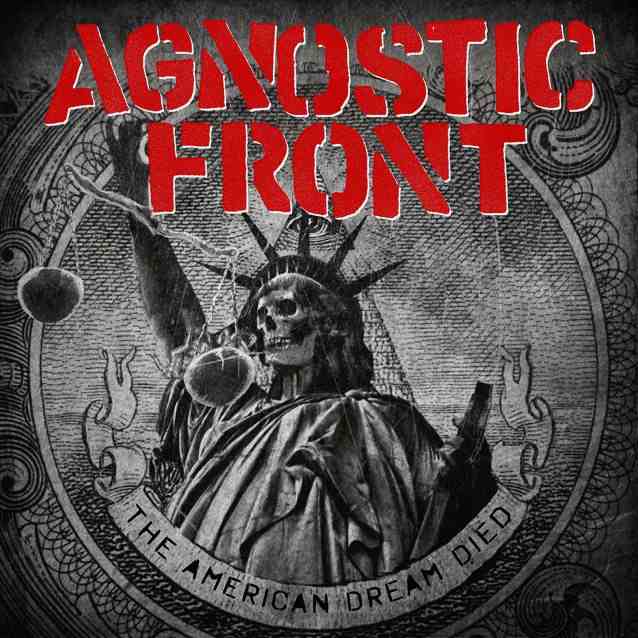 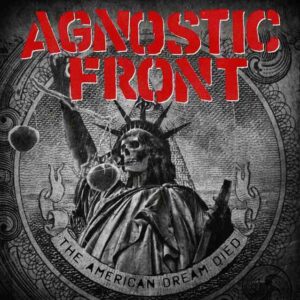 After Sick Of It All’s “Last Act of Defiance” in 2014, MadBall’s “Hardcore Lives” and an upcoming album from H2O later this year, it is safe to say that New York hardcore is still going as strong as ever, and Agnostic Front are adding fuel to the fire with their eleventh studio album.

Right from the word go, the cover art makes their point loud and clear before even hearing any of the music. A bullet-hole ridden, skull-faced, grey, diminishing Statue of Liberty could not have been anything else to represent this album.

Opening with news soundbites, sirens and gunshots you would be forgiven to think this was a rap / hip-hop release, but this tasteful intro outlines the initial manifesto of political yet personal anger and aggression that is about to be presented.

This leads perfectly into the title track which makes a statement in itself.

The unmistakable vocals of Roger Miret deliver a crushing backlash upon the American government in less than two minutes, paving the way for the self explanatory and straight to the point “Police Violence” coming in at number two, equal in measure. Some may call a punk or hardcore song dissing the police a cliche, but coming from a band who defined the genre from the country with seemingly the most press coverage on such an issue (it’s 2015 and this is still happening?), this is relevant and therefore cannot be faulted, but praised.

“Only In America” speaks some home truths about the way American war veterans are treat and to someone like myself from outside the US this gives a clear, understandable presentation, again something which Agnostic Front have always been able to do.

“Test Of Time” kicks straight in again with the galloping guitar rhythms of Vinnie Stigma, a slower but harder chorus polished up with the all favoured gang vocals and finished off nicely with a solid break down – classic Agnostic Front, classic hardcore.

“We Walk The Line” takes a more personal turn lyrically, tackling the stigma of the life chosen in order to pursue your own desires. Something Roger sounds defiantly proud of, and rightly so.

“Never Walk Alone” is a classic call to arms and unifying song featuring Roger’s half brother Freddie Cricien of Madball, Toby Morse of H2O and Lou Koller of Sick Of It All respectively, with the calls of “This is our lives, this is our scene, this is my passion..”

This song just has to be played live, and when it is it’s gonna go off!

“No War Fuck You”, “Enough is Enough” and “I Can’t Relate” all around 40/50 seconds long are more akin to thrash metal with blast-beat drums and fast guitars, but hard hitting vocally and leaving you wondering what has just happened before you realise that a song has just started and finished.

“Old New York” picks things back up again paining a picture of how things once were, again with a simple but catchy as hell chorus. Tried and tested, works every time.

“Social Justice” is back at you again with the galloping guitars of Stigma and a quick solo showing that this guy can still shred, and if you know the story behind this song you would also believe it makes a very strong point.

“Just Like Yesterday” finishes things off in spectacular fashion with Agnostic Front making the statement that this is who and what they are and will always continue to be.

At sixteen songs it could be assumed that Agnostic Front have thrown everything they have onto the album with no real planning on the final edits but this does not seem apparent as the songs flow well and it doesn’t drag on. It picks up and then eases off at some points, especially in the latter half of the album after the quicker songs, but this is Agnostic Front doing what they do best – fast, aggressive, old-school, classic hardcore.

In a time when music is so easily accessible and changing so fast and bands coming and going, there are still bands out there who continue to deliver time after time. Agnostic Front have always been a band that even if you’re not a fan of hardcore you still know who they are. Without Agnostic Front and the rest of their NYHC family the scene would not be the same and this album is a solid brick in that wall and will no doubt be a fan favourite.