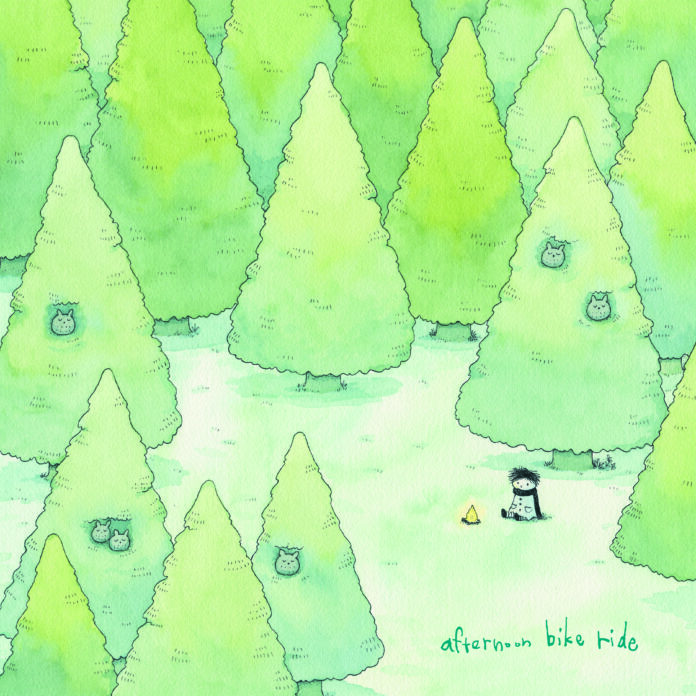 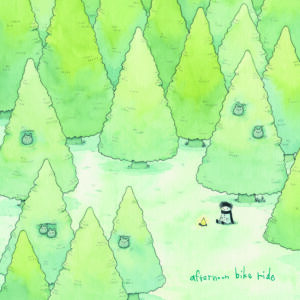 All the way from Montreal come the dreamy, wistful tones of Afternoon Bike Ride. Here is a trio who originally planned to come together briefly to explore a collaborative, creative aside to their highly successful solo projects. But, like Victor Kiam, they liked it so much they bought the company. We should be thankful.

The trio involved are multi-instrumentalists/producers, David Tanton (Rhoda, Tender Spring), Éloi Le Blanc-Ringuette (aka Thomas White) and Lia Kurihara (aka Lia), and their eponymously titled debut album follows hard on the heels of three critically acclaimed EP’s. The overarching feeling of Afternoon Bike Ride is one akin to being immersed in a warm bath. Musically, it’s comforting and soothing; its wispy, lo-fi sensibility enshrouds you, convincing you that all is well in the world. However, an interesting counterpoint is provided by many of the songs’ themes and their lyrics, which are often at odds with this sense of contentment.

You don’t have to wait too long for the perfect illustration of what has already been established as the trademark Afternoon Bike Ride sound. It comes right at you in the opening track, Dog Years. Immediately, one is struck by the sublime voice of Kurihara, which turns out to be an absolute highlight throughout this collection. Her breathtaking vocal is accompanied by a lovely guitar pattern in a tune that evokes long, hazy, languid summer days.

Afternoon Bike Ride are big on collaborations. Of the fifteen tracks on the album, ten are collaborations, including Dog Years, which features Middle School. Evidently, this is a confident trio, unafraid to bring other parties on board to bring whatever is required to augment a particular track. Certainly, they all seem to work pretty seamlessly, probably by virtue of the fact that the collaborators are described by the band as “friends of ours”.
We shouldn’t be surprised that, in a collection of fifteen tracks, there will be some solid gold, five-star crackers. A great example is the beautifully hypnotic C’était, which opens in a beautifully homespun way with what sounds like a studio conversation between the band and guest vocalist Naji about how to kick the tune off. As it unfolds, there are wonderful field recordings of birdsong, lush harmonies and a mesmeric acoustic guitar that simply sucks you right into its heart. And, of course, songs sung in French always sound so much better.

Another stand-out is the glacial, minimalism of Sunday Sketch. Channelling the spaciousness of vintage Cocteau Twins, it’s a dreamy hug. At one point, Kurihara sings “when the sun kisses my eyes awake” and, in that one single line, she perfectly captures this tune’s (and the band’s) vibe. It is like the sun gently kissing your eyes awake. Then you have the staccato, waltz-time of Before The Fall, which is quite delightful and evokes Kate Bush’s Army Dreamers.

The album’s highlight, however, is the Imagiro collaboration, It’s Alright. I understand that this is the English pianist’s first full singing appearance. You would never know. His world-weary vocal takes centre stage on this folksy tune. “It’s alright”, he tells us, but he doesn’t sound super confident about that. When Kurihara’s voice joins in half way through, taking the lead on the third verse, it is utterly heavenly. Lush strings provide a sumptuous backdrop. It’s Alright is a special song, one with an incredibly catchy hook and featuring outstanding musicianship and the most incredible vocal performances.

I’ve already referred to the fact that Afternoon Bike Ride comprises no fewer than fifteen tracks. That’s a lot of content, but it doesn’t feel overly weighty thanks to the brevity of most of these songs, with many of them clocking in at under three minutes. Notwithstanding that, there are moments on the album that feel a little lightweight – certainly in comparison to the tracks I’ve highlighted above. Sometimes, less is more and I believe that the overall impact of this fine debut could have been amplified by slimming it down slightly. For example, three of the tracks are instrumentals and they all feel a little superfluous without the outstanding vocal contributions present elsewhere.

That said, it’s much more satisfying to focus on the positives and there are plenty of them on this debut. If intricate, lo-fi, dream-pop is your thing, then you are going to fall in love with Afternoon Bike Ride. They are clearly incredibly talented musicians and songwriters who have succeeded in crafting a quite sublime album.