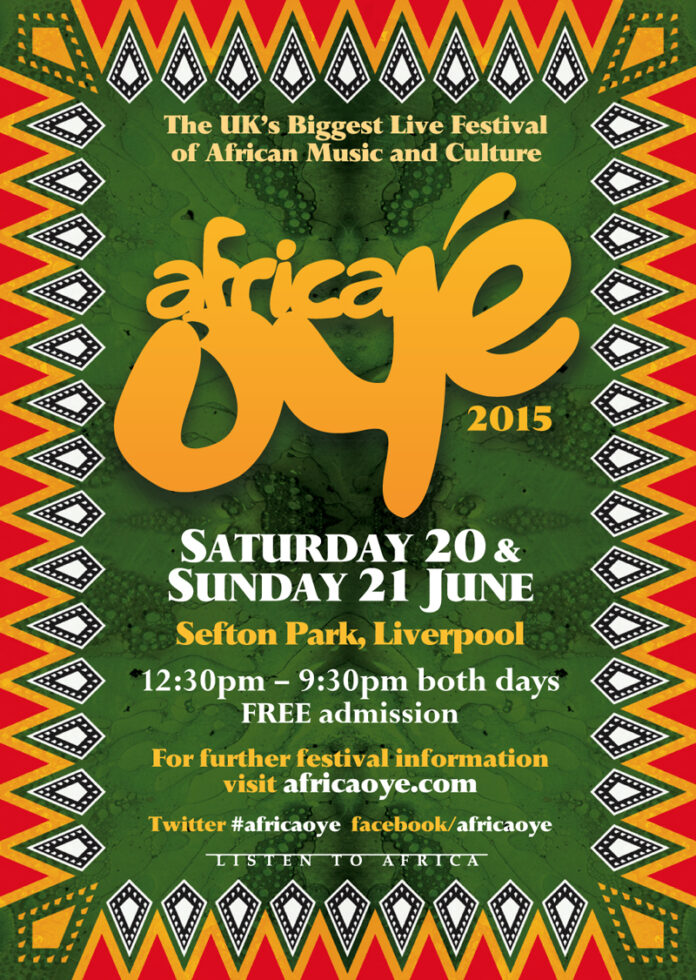 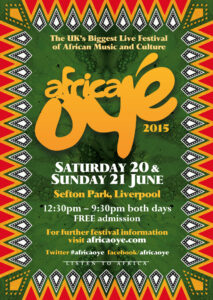 The best festival of African music in the UK and arguably Europe, Africa Oye, returns to Liverpool June 20/21.

Held in Sefton Park in Liverpool it’s a brilliant weekend that showcases the brilliance and diversity of African music and it’s FREE!

Get down there and have a great time.

Here are some of the acts playing this year…

Derito  Derito was born in Benguela, Angola and has seen success as an author, composer, singer, guitarist and music producer. He performed on stage for the first time in 1977 in Benguela and since then his music career has taken him all over the world.  In July 1995 he recorded his 1st album, “Saudade” which was a best-seller in Angola and in October 1996 he released his follow-up record “Alison”, making a harmonic transition to Afro-jazz.  In 2006 he recorded Angola’s official Football World Cup song  and a year later he was invited to compose and record the Anthem of the African Basketball Championship, the “Afrobasket 2007” . He was appointed as an Ambassador for the African Cup of Nations in 2010.  https://www.youtube.com/user/derito7866/videos

Returning to Oyé after an acclaimed set in 2009, Masiala is a singer and songwriter from DR Congo. Based in London he plays upbeat and high tempo Soukous, Rumba, Salsa and Afro-Cuban music. He is part of a fourth generation of Congolese pop musicians in the Diaspora.  The peroxide haired band leader and lead vocalist has been in music for over 20 years and performing worldwide with his band NKA Musica for over a decade. The band is recognised not only for their music, but as one of the best dressed acts in the country – impressing with their fashion as well as their sound.  https://www.youtube.com/watch?v=pCuEbUifWZ4

Senegalese musician Diabel Cissokho is part of the great line of Cissokho griots. Growing up in Dakar, surrounded by a rich musical heritage and a family of musicians, Diabel began playing a number of traditional instruments. Diabel’s affinity with the kora was clear from an early age.  Diabel’s musical pedigree is exceptional. International tours with his family’s band Bannaya led to a long stint as Baaba Maal’s kora player, as well as with acclaimed musicians such as Kandia Kouyate and Pee Wee Ellis. Now well established in the UK, Diabel’s virtuosic talent, his “resonant voice and rocking kora style” (Songlines), have been welcomed everywhere from WOMAD and Glastonbury to London’s Barbican, where he performed alongside Femi Kuti.  https://www.diabelcissokho.com/music/   Omar

There are precious few, if any contemporary UK artists whose creative credentials and influence extend as far and so consistently wide as Omar. Since first breaking through to worldwide renown all the way back in 1991 with his first releases on Giles Peterson’s seminal Talkin’ Loud label, Omar has gone on to work with all manner of musical legends including a certain Stevie Wonder.  His original techniques have garnered him a strong legion of followers in the UK, where he had a Top 20 hit with ‘There’s Nothing Like This’ as well as a devoted fan-base in diverse regions across the world.  www.omarmusic.co.uk    BKO Quintet  All the members of Mali’s BKO Quintet grew up with the music and culture of their ancestors; both the hunters and the griots. Together they’re creating something very different on their full-length debut, ‘Bamako Today’ (released 2015 on Buda Musique) which brings together those separate traditions, and the result is a unique sound that lives up to the album’s title, creating a New Tradition of Malian Music.  The band took songs from the Malian tradition and gave them their own interpretation, using the past as a springboard into the future. They altered melodies, came up with fresh arrangements, and made the music into something new – and, more importantly, something unifying for Mali.

Lindigo is fronted by the charasmatic, Olivier Arasta, committed champion for continued development of ‘maloya’ – Reunion Island’s vibrant symbol of creole culture whose strident vocal calls, chanted responses and complex percussion rhythms originated with the slaves brought to work on the sugar plantations and became a weapon of resistance, banned until the 1980s.  Before going on stage Olivier Araste, the charismatic and powerful lead singer of the band Lindigo, always leaves in the dressing room an offering to his ancestors. At the heart of the trance, vigorously induced by his group and their frenzied  rhythms played on the roulèr, the pikèr and kayamb, whirl the invited spirits of the ancestors, giving the band’s eight members energy, faith and courage.
https://bkoquintet.com/video/   Lindigo
https://www.last.fm/music/Lindigo

Frankie Paul
Frankie Paul is often referred to as Jamaica’s Stevie Wonder, and not just because of his visual impairment; like Wonder, he is a talented multi-instrumentalist with a tremendous vocal range. He was also extraordinarily prolific; part of the first wave of dancehall artists, he started his recording career in earnest during the early ’80s, and has since flooded the market with product, releasing countless singles and well over 30 albums.  His prolific recording career has made his journey difficult to track for all but the most ardent fans, but it’s also ensured that he’s never been too far out of the spotlight on a constantly changing reggae scene.

https://www.last.fm/music/Frankie+Paul   Sarabi    Sarabi, – a Swahili word for Mirage – also means, imagination, vision and creation. Sarabi was formed in 2005 and is made up of 8 youngsters hailing from Nairobi’s Eastlands slums and started playing music at an early age of 11 years. Sarabi’s music is influenced by everyday’s happenings. They create a sound picture that vividly represents their society’s every day journey.  Sarabi’s music is made up of heavy traditional Kenyan rhythms, Benga and a blend of Western sounds, which made their music become nicknamed Oregorego, a local vernacular word for posho mill. Sarabi has proven to be one of the most talented and most solid Afrofusion bands in the Kenyan music scene.  https://www.youtube.com/watch?v=FlGRfouedjo   Cumbia All Stars  Cumbia All Stars come from the legendary bands of Peruvian Cumbia – Los Hijos del Sol, Los Diablos Rojos, Los Destellos, Los Girasoles, Los Beta 5 and Los Ribereños – and, after 40 years, they meet again to play together the music they participated in creating.  A product of the effervescent environment of a decade of rediscovered freedoms, psychedelia in Peru, planted its roots in the late 1960s in the suburbs of Lima among the children of immigrants and in the remote cities of the Amazonia. Spawning a musical genre that is now an integral part of the Peruvian identity.  Cumbia All Stars is a journey in search of that original sound – of delirious melodies with bold, resonant guitar lines and jerky beats.  https://soundcloud.com/cumbia-all-stars   Modou Toure & Ramon Goose
Having already built himself a reputation as a great blues guitarist (working with the likes of Eric Bibb & Boo Boo Davies, Eric Burdon, Pee Wee Ellis and founder of the Nublues project), Ramon Goose was introduced to the world of African music and was inspired by what he found.   Keen to learn more and influenced by the work of good friend Justin Adams, he set about exploring the idea of combing the beauty of West African music with the soul of Blues. This led him to teaming up with fellow Oye ’15 star, Diabel Cissokho. The result was the release of Mansana Blues an album packed full of superb soul searching melodies and well received by the media.  Out of the blue Ramon was contacted by Modou Toure (son of Toure Kunda singer Ousmane Toure) and The West African Blues Project was born. Meeting with Modou Toure that set them both on a spellbound journey to majestically take the blues back to its birth place.   Heir to the 1980’s first world music superband Touré Kunda from Senegal, Modou Touré was born into music as a way of life an d artistic necessity. Although his famous father Ousmane Touré had a clear influence on his early works, their voices bearing striking resemblances, Modou has created a strong personal style, based on a refreshing and original take on traditional West African folk music.   https://www.youtube.com/watch?v=ALK89SAnSLE

Merki Waters
25 year old Singer/Songwriter/Rapper & Producer, Merki Waters is one of the UK’s outstanding up and coming artists, noted for his creative lyricism and superb vocal delivery. With sharp biting commentary and the aspirations and hopes of a generation put to pulsating grooves and stirring melodies you are taken on a lyrical and musical journey throughout his live show, that inspires.
Merki Waters is a founder of the Lab Music Foundation which has been providing services to meet some of the needs of underprivileged local acts in Liverpool in the form of music workshops, performance training, audio/video recording, showcase events as well as providing a youtube platform “Lab Tv” which is now the largest urban media broadcaster in the Northwest of England, with over 6.8 million views in total. Showcasing video content of rappers, singers, musicians and other entertainment.
https://merkimusic.bandcamp.com/

Pieces of a Man  A 7-piece neo-soul band hailing from Manchester. Their mission statement is to show soul, no matter the stakes, by creating music of real character and intention. Influences include neo-soul heavyweights D’Angelo, Dwele, Omar, Robert Glasper and Jill Scott, as well as more traditional soul staples like Stevie Wonder and Gil Scott-Heron.  That gives soul heads an idea of where they’re coming from, and everyone else some essential homework to do! Pieces have recently completed recording material for their new record, ‘Mixtape Vol.2’.   https://piecesofaman.org/