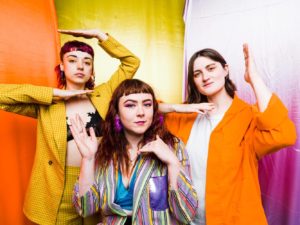 Adwaith have today announced details of their forthcoming double A-side single and Louder Than War can exclusively reveal the first track from it ‘Hey’ which you can listen to below.

There’s no rest for the brilliant. Or so they may or may not say. Refusing to rest on their laurels, Adwaith have announced details of their new single. Following the release of one of 2018’s finest albums, Melyn, the band (Hollie Singer, Gwenllian Anthony, Heledd Owen) headed out on the road once more embarking on their biggest UK wide tour to date. When they came of the road the band decided to take stock of what has been a remarkable eighteen months and instead of taking it easy decided to push forward focusing on writing and recording new material.

These writing sessions took place between London, Cardiff and the rural tranquility of Taliaris, Carmarthenshire. The first fruit of those productive sessions where Adwaith had space to explore and flesh out their sound is ‘Hey!’

According to the band:
“Hey! is a song about people ignoring obvious facts that are right in front of them. Global leaders are not acting upon climate change and they can’t ignore it for much longer!!”

Hey!’s musical urgancy reflects the lyrical message with a riff that could have easily have tumbled from Belly’s ‘Star’ or Sleater-Kinney’s ‘Dig Me Out’. This new spiky confidence amplified by the always on-point production of Steffan Pringle suites them very well. ’Hey!’ will be part of a double A side single released in August via Libertino Records.

‘Hey’ is a further evidence that when it comes to Adwaith there are no bounds to where their creativity and drive will take them. Roll on August when we get to here more new music from one of Wales’ most important bands.