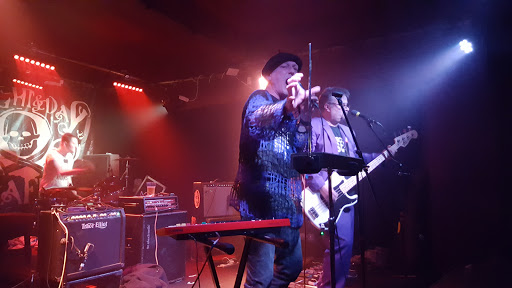 The Cramps crossed with The Fall

Adventures Of Salvador are a new band that hail from Bury.

Most people see bands as young kids trying to do their bit on the music scene. These guys have been around for a while and know their stuff with a wide music knowledge. They are the epitome of punk DIY ethics, and released their own album (Chocolates & Drugs) on their own label. Tonight I see them live for the first time at Night n Day in The Northern Quarter and get a pleasant surprise!

A lot of people have turned up tonight to see a fun punk band with a twist. They enter the stage to their theme signature instrumental Salvadors Theme which has Dick Dale’s surf rock written all over it. I’ve never seen a live band using a theremin before and it gives them a clever twist to add to their punk sound. The Death Of Me (Shot Down) is next with menacing bass and snarling lyrics from the lead singer Loop Aznavour. Tales Of Male Bravado goes down well with the crowd and What About Us is a funk punk gem. Eds Place gets a great round of applause due to the funny as fuck lyrics and punk attitude.

New track Bring Me The Head Of Uncle Walt is all about the corruption of the Disney corporation and has some great lyrics! They then finish off with the early singles Ping Pong Head, We Wrote A Popsong and the brilliant Doghouse. Think of The Cramps crossed with The Fall and a topping of punk surf rock and you’ll get the gist. A promising band who are in the process of a second album. Check them out!