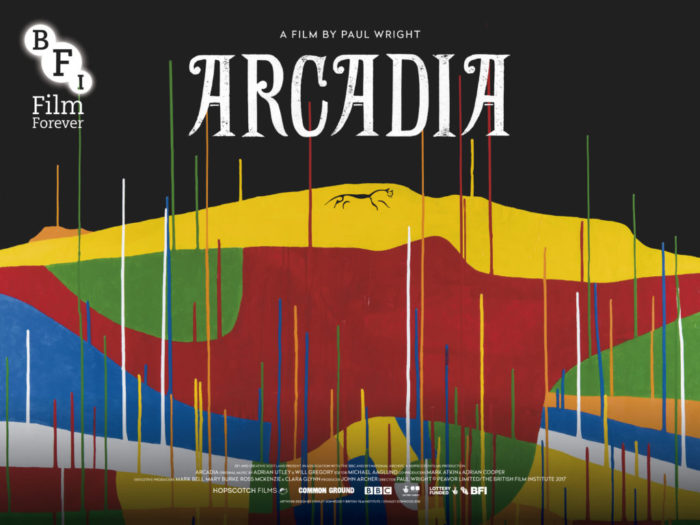 Portishead’s Adrian Utley and Goldfrapp’s Will Gregory have teamed up to create the original soundtrack for the new Paul Wright film ‘Arcadia’ featuring artwork by artist and Radiohead collaborator Stanley Donwood.

Arcadia is the new film from BAFTA award-winning Scottish director Paul Wright and explores our complex connection to the land we live in. Combining over 100 film clips from the last 100 years the film goes on a sensory, visceral journey through the contrasting seasons, exploring the beauty and brutality, magic and madness of our changing relationship with the land and each other.

With the sound design incorporating found sound, the score itself sees Utley and Gregory delve through a myriad of styles and textures, traveling through Gothic folk to  industrial techno soundscapes. The score seems to travel through the entire history of Western recorded music at one point even tripping into a Glam rock stomp and punk swagger. It is a score which manages to at once be warm and pastoral before flicking to deeply meditative and, frankly, disturbing multi-layered synth rollers. ‘Arcadia’ also features the vocals of folk singer Anne Briggs whose rich and exquisite voice adds a melancholy and sense of loss to the track ‘Lowlands’.

The film itself was created using a mixture of film and TV footage which director Paul Wright sculpted into a mosaic of contrasting images, sounds and moods, taking in folk carnivals and masked parades, hunting and harvesting, communes and raves, mechanisation, environmental issues, fires, floods, storms and much more. All of which Utley and Gregory have managed to capture in their score making this one of the essential releases of 2018.

‘Arcadia’ OST by Adrian Utley and Will Gregory will be released by Invada Records digitally on the 22nd of June with the vinyl and CD versions to be released soon after complete with original art by Stanley Donwood.

Arcadia will be released by the BFI in select cinemas UK-wide and on BFI player on the symbolic, celebratory day, Summer Solstice, 21st June 2018, followed by a BFI DVD/Blu-ray release on the 20th August.