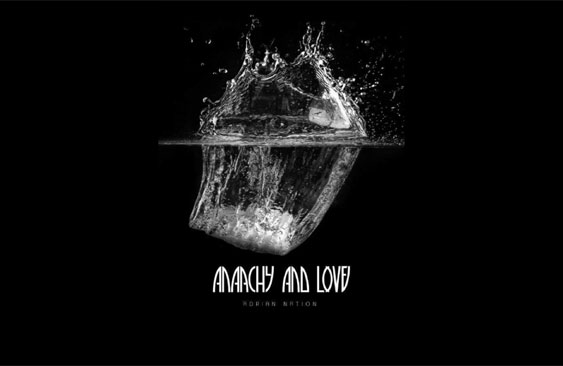 Sky Arts Guitar Hero contestant Adrian Nation breaks from an attempt at reality recognition and gets back to doing what he does best, showcasing his acoustic chops and more.

His last release, 2014’s Live At Crossroads captured a scintillating performance that acted as a catalyst to convert many to the distinctive guitar style and technique of Adrian Nation. Heading off to Sardinia with Chris West, producer of his second album, Fall Or Fly, he’s returned with a new set that finds him in ‘if it ain’t broken why fix it’ mode, yet also plugging in and adding the occasional drums and a couple of guest instruments to explore new soundscapes and textures.

Throughout the album there’s a strong sense of tribute to his father who died in 2013 so expect a number of deeper emotive and fragile moments and some degree of outpouring and cathartic release. While he’s made his stance on social justice clear in the past, Anarchy And Love finds a rare sensitivity. While something like The Last Goodbye has a lively and bouncy momentum, it contrasts with the melancholy thoughts of River In The Rain where for once, but not the only time on Anarchy And Love, the guitar plays a low key role, providing an ambience for a contemplative memory.

A touch of U2 crosses with Show Of Hands as he covers Runrig’s Rocket To The Moon to open the album, adding a ringing guitar and marching snare to a Steve Knightley half spoken half sung delivery. It’s the first of a handful of Scottish influences. Benderloch Stone was written on the shores of the Scottish west coast and guided on its way by a faint celtic low whistle and Hannah Fisher’s fiddle. Robert Burns’ A Man’s A Man gets the honour of closing the album with Campbell Cameron’s spoken word adding a touch of poignancy.

His trademark of mesmerising finger picking comes to call on Our Friend From The East, the first instrumental vehicle with the twelve string is on show. Carpe Meridianus kicks off with a more controlled and easy paced side that soon gives way to a jaunty spilling of tumbling notes and he adds more variety by channelling a bit of Chris Rea with some dirty slide on the title track.

Anarchy And Love offers another absorbing journey with Adrian Nation. Familiar roads are travelled with enough diversions along the unbeaten tracks that provide an intimate insight into the Nation psyche.