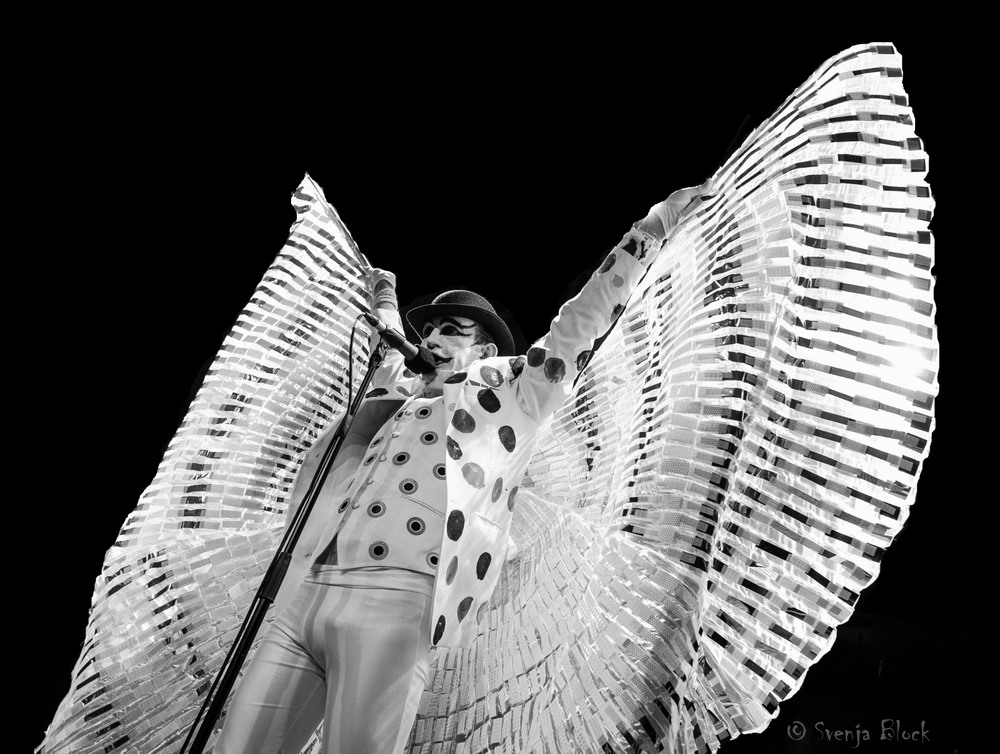 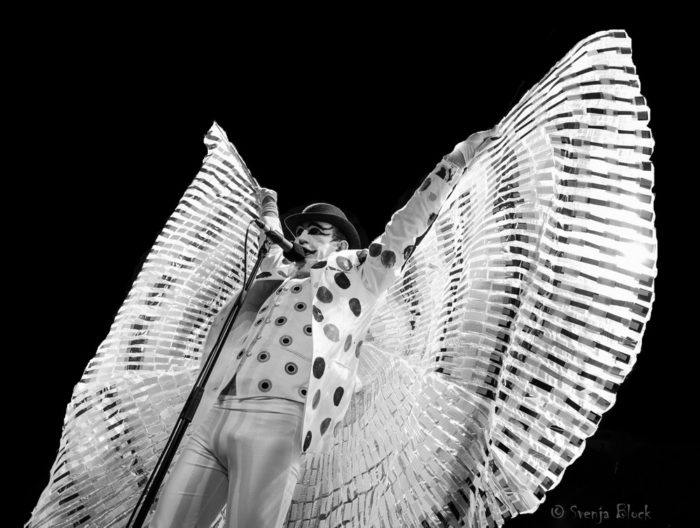 The Adicts rock London’s O2 Academy Islington with confetti, streamers, glitter, beach balls and fun of a decidedly punky variety. A good thing that Louder Than War’s Andy Duke and is on hand with his bowler hat, eye make-up and love of Ludwig Van as he reviews this Clockwork Orange loving band’s long awaited return to the capital, complimented by Svenja Block’s photos.

Similar to Toy Dolls, who also came of age during the second wave of punk, The Adicts have managed to carve an impressive niche as a fun and powerful live entity. Dispensing with political diatribe in favour of pure entertainment, the band prefer unleashing party streamers and glitter rather than shout about the woes of the planet. And, rather than preaching to the converted, the three original members and their two German touring companions provide a well needed diversion from depressing headlines and fake news. 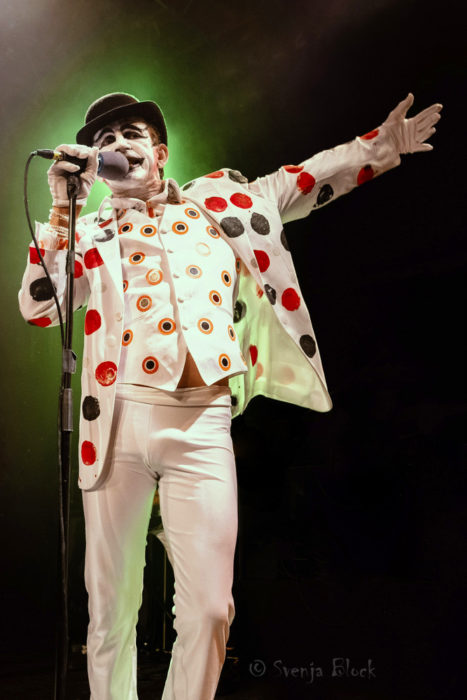 Kicking off their 22-song set with Let’s Go before a capacity crowd at Islington Academy, frontman Keith “Monkey” Warren arrives onstage with the pomp and circumstance that would be more befitting of a Las Vegas magician. And, before tackling the microphone, the polkadot-suited Ipswich native extends his armsout like a peacock to reveal impressive silvery wings.

This isn’t an ordinary punk show and it’s all the better for it. Despite the main vocal microphone being intermittent during the quintet’s first number, it didn’t really matter as the crowd were merrily singing along in Warren’s absence. Thanks to their ageless sense of fun and, for want of a better phrase, aesthetic consistency over the years – The Adicts have been able to attract a new legion of young fans. It’s akin to the Dorian Gray-esque appeal of The Ramones in that the group’s sensibility is seemingly impenetrable by the time. The band would undoubtedly be pleased to know that there were a lot of late teens at the gig with makeup inspired by a certain banned Kubrick film who weren’t brought there by a punky parent. 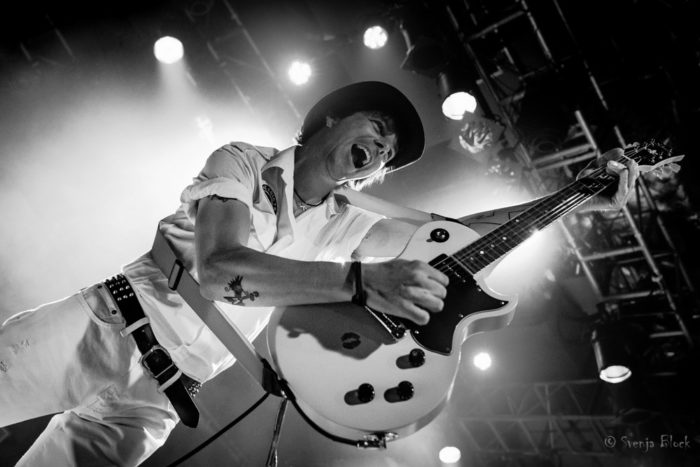 Similar to UK Subs, whose singer Charlie Harper was coincidentally in attendance at this very gig, The Adicts are in danger of becoming a great rock band. Punk purists might gawk at their sense of humour. Fans of first wave bands like The Clash and Sex Pistols may cringe at their stage props and cinema inspired attire. And those who favour economy in their punk may wince at Pete Dee’s impressively executed guitar solos. But, to this reviewer, punk is an attitude. Of which being able to do things on your own terms is an important part. With that in mind, The Adicts are punk as fuck. And are faring better than many of their fellow veteran punks both in stamina and productivity. And they’re certainly the only group on the circuit doing a convincing punk version of Beethoven’s Ode To Joy. Good old Ludwig Van.

This is attributable to two main reasons. Firstly, Keith and the Sunderland-born Davison brothers (Guitarist Pete and Drummer Michael) clearly love what they’re doing and that enthusiasm is contagious during their tight shows. Of equal importance is the fact that their material has universal appeal. Tracks like Who Spilled My Beer? resonate with the audience and many lucky fans located up front enjoyed the spray from the joker-faced singer’s can of lager during each and every chorus. It’s light fare, for certain, but delivered with great aplomb.

Having celebrated his 59th birthday just prior to this long-awaited London gig, Keith Warren quipped that he is merely “another 54 years from being a teenager again” before taking off his shirt and singing Viva La Revolution like he was rocking the 100 Club in 1983. The French novelist Jean Baptiste Alphonse Karrcoined the phrase that the more that things change, the more they stay the same. In the case of The Adicts, however, change simply isn’t in their vocabulary. And long may it stay that way. 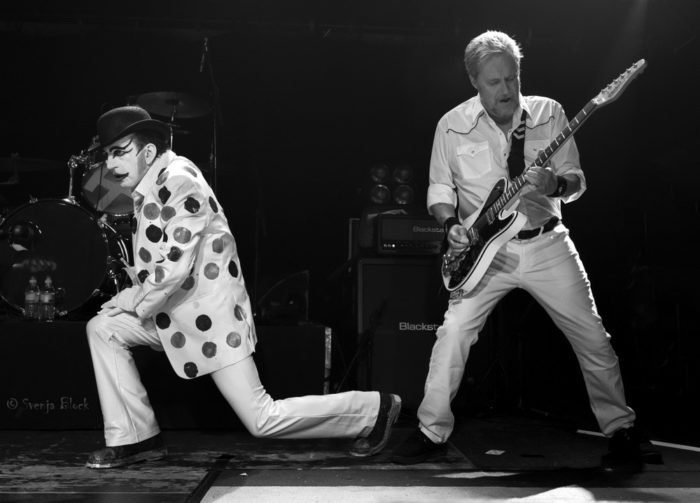 The Adicts’ new album And It Was So! is out now via Nuclear Blast.