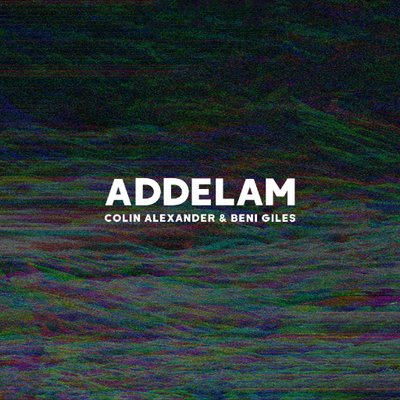 Comprising Colin Alexander (Composer and cellist at BBC Symphony Orchestra and Royal Philharmonic Orchestra) and Beni Giles (composer and producer, collaborator with Nonclassical), Lee Ashworth finds that the eponymously entitled debut album Addelam is rooted in a sense of place, yet all the more eloquent for its mysterious and graceful abstractions.

Recorded at various locations using field recordings, site-specific sounds and instrumental improvisations, the album is a meditation on the natural beauty of Deal, East Kent, ‘Addelam’ being how the area is described in the Domesday Book of 1085.

The timbre and textures of the cello are at the forefront of the eight tracks on Addelam but on tracks such as Ingress, the listener is surrounded by an orchestra of improvised percussion and sonic layers, organic and primitive, twinkling and fizzing, instruments – whatever they may be – entwined like kindling around a late night beach fire.  Ingress is the rendering of a moment, sustained for the duration of the track: it doesn’t build, it doesn’t intensify – it simply is – immersive yet gossamer-light, intangible as the flickering of the flames or the waves lapping onto the shore.  The use of gamelan-style percussion is evocative of Bjork’s attempt to create an intricately layered matrix of ‘micro beats’ for Vespertine, yet here the electronica is given an even more natural, analogue treatment.

The cello creaks, cracks and yawns: this is a nautical, coastal record.  You can hear the wood of the masts and the hull rising and falling on the gentle swells, the tightening of ropes and the expansion and contraction of natural materials in sunlight and warmth.  On increasingly obsessive repeated listens, I found myself patrolling the East Kent coastline, a place to which I have not yet physically been, and I found the smoothness of timber beneath my hands and feet, the straw-like spark of rope and the pumice of pebbles, dry, dry beneath my soles afterwards.

Ingress, Egress, Brush tide, Surge and Down Up Up… the trackless reads as a Modernist poem, a paean to the movement of water.  Addelam is sea-stained and there is salt in the creases of its palms, in its laughter lines and in the furrows of its frowns.  When you have been looking at the sea and sky and the horizon between the two for so long that you can no longer distinguish one from the other and you no longer care to, then you know you are well and truly in and of the moment.  Addelam is an album whose buoyancy lifts us up into the moment and as such it is a rare and precious thing.  Cling to it.  Let it sweep you away.

You can download or stream Addelam from Amazon and iTunes now.