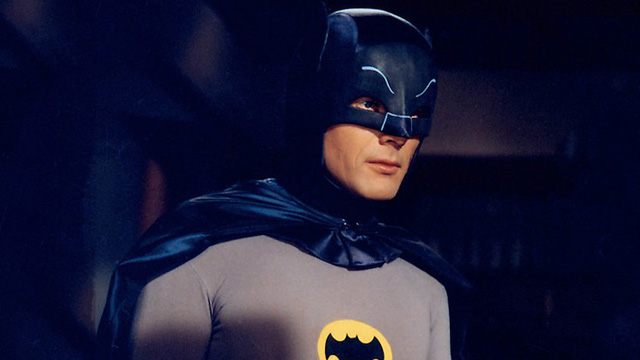 Adam West iconic TV star of the sixties show ‘Batman’ passed away on Friday the 9th June after a short battle with leukaemia. William West Anderson was born on September the 19th 1928 in Walla Walla, Washington and started his acting career in 1959.
Without a shadow of a doubt Adam West’s portrayal of Batman in the 1960s ABC series and feature film is easily the most revered and recognisable version throughout the world, over a colossal 50 year period. Batmania started in 1966 catapulting Adam West and his co-star Burt Ward to overnight success but within a two-year period the bat signal had all but faded and ABC TV cancelled the show. This left Adam West in the same predicament as being typecast much like the late great Fred Gwynne of ‘The Munsters’ fame. Unlike Fred Gwynne though Adam West wholly embraced the adulation from fans from every new generation that tuned into the series with re-runs that have spanned over the past five decades.
The colorful pop-art-esque show filled with vivid colourful graphics containing the words ‘POW!’, WOW!, WHAM! and ‘BAM’ that filled the screens in fight scenes was accountable for a huge increase in the sale of colour TVs. Adam once said in retrospect he should have gone right out and endorsed colour TV sets as he and Burt Ward received a pittance for likeness in toys and other memorabilia. Not only was Adam West’s representation of Batman the most recognisable, the Batmobile created by George Barris is easily one of the best loved TV cars of all time. It’s also the second biggest selling toy car by the Corgi manufacturer selling approximately five million units worldwide. Barris who himself passed away in 2015, once told me in 2010 that he and Adam West remained friends long after the series had aired, as they were intrinsically linked by conventions, classic car shows or TV anniversary spin offs. I can recall George telling me at his custom shop in Los Angeles that you couldn’t meet a more wonderful and genuine guy than Adam West whilst proudly showing me his vast collection of Batman memorabilia.
The kitsch-laden success of the Batman TV show had stars queuing to play parts in the popular TV series. Adam West worked along some greats of the time. Eartha Kitt, Vincent Price, Ceser Romero, Liberace and even the legend that is Bruce Lee appearing in it’s three season run. All one hundred and twenty episodes were only released three years ago on DVD and Blu-ray due to legal complications with the studio owners much to the delight of dedicated Batman fans.
In recent years Adam appeared as Mayor West in Family Guy and was last seen on British TV on ITV’s ‘Through The Key Hole’.
Adam’s family have released this statement
“It’s with great sadness that we are sharing this news…Adam West passed away peacefully last night after a short but brave battle with leukemia. He was a beloved father, husband, grandfather, and great-grandfather. There are no words to describe how much we’ll miss him. We know you’ll miss him too and we want you to know how much your love and support meant to him throughout the years. Hug your loved ones today”.
– The West Family
On a personal level I find it hard to describe the emotion I feel at losing my first ever TV hero however I can recall that he is the only star that I’ve met personally that I felt myself totally lost for words and he quipped “It’s ok son, I knew what you were going to say anyway!” with that he shook my hand and beamed the biggest smile that I will always fondly remember.