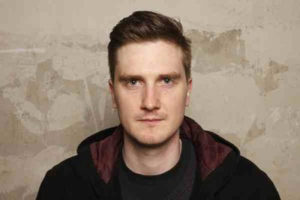 Louder Than War’s Ioan Humphreys gets to listen to the second track Zero Disruption from Adam Stafford’s latest album Fire Behind The Curtain on Song, By Toad Records

I’m no stranger to the talent that is Scotland’s Adam Stafford as I’ve previously reviewed his work here. However,  today  sees the release of his latest album Fire Behind The Curtain on Song, By Toad and Zero Disruption is one of the lead tracks off the new release.

The track starts with an infectious repetitive guitar flourish that runs throughout the track. Gorgeous strings are added that give the track depth and breadth. The guitar flourishes continue and overlay the initial riff. Percussion is introduced alongside effects and noises that embellish the track. Two thirds into the track, a choral, almost African choir is introduced which lifts the track and takes it into a different arena altogether.

All the additions are slowly taken away to leave to leave just the infectious guitar riff on its own right to the track’s abrupt end. The comparisons to Steve Reich are valid, yet I also hear a Penguin Cafe Orchestra influence too that is welcome and appreciated! Repetitive, minimalist and almost meditative in its structure, Zero Disruption is certainly not what I expected from Stafford’s recent oeuvre. But I am happily surprised and look forward to what the whole album brings. Lovely stuff.

Fire Behind The Curtain is out now on Song, By Toad  on DL and Vinyl, and you can pre-order it here

4th May – The Hug and Pint, Glasgow (Tickets)

Adam can be found via his label and he tweets as @ad_stafford.