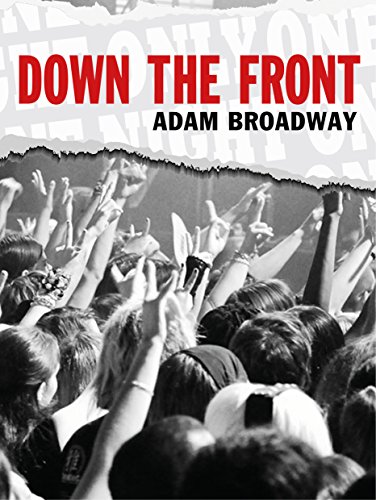 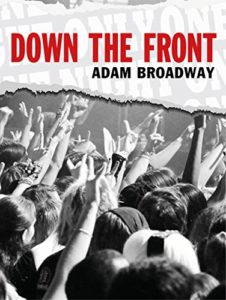 First published in 2015, ‘Down The Front’ is Adam Broadway’s commentary on 35yrs plus of gig going; it has been out of print for a while and only available as a Kindle; now for a man like Broadway who has retained almost every ticket stub from his first gig (Random Hold supporting XTC) to date, this was clearly not good enough – thankfully another print run has been commissioned, which will not only address Adam’s OCD issues but will allow his light hearted ‘Search for the Perfect Gig’ to reach a wider audience.

Across the 200 pages Broadway breaks down the ritual of regularly attending gigs into sixteen chapters each shining a knowing and confessional light into the art of gig going; his first gig wasn’t actually Random Hold but early 70’s jazz tinged vocal nightmare Manhattan Transfer; I can forgive Adam this minor honesty discretion as he didn’t actually elect to attend, being a mere 13yrs of age he was dragged along by his family; however once he discovered ‘real’ gigs he recalls those bygone days when getting a ticket actually meant visiting a venue, or local record shop and queuing up – none of that Ticketmaster jousting, then once you have actually arrived at the gig learning to understand the subtle nuances of the crowd ‘The Third Track’ which accurately details the energy levels of the watching audience, to the crucial ‘Down The Front’ which looks at the mechanics of a ‘mosh-pit’ – Adam’s response has been to create five rules commencing with Don’t Enter First’

What is interesting about the book is that Adam has made his observations whilst attending in excess of 700 gigs, this doesn’t count festivals as (rightly) seeing a particular band at a festival as you wander around in a drunken haze cannot count as ‘seeing the band’ – my own last sentence demonstrates that I regularly recognised myself within the anecdotes, regardless of the difference in bands Adam has seen, his including The Rolling Stones, Prince, Leftfield and a rather keen penchant for Ezio, the Cambridge based folk outfit – to be fair Adam has also seen Killing Joke countless times, there are even gigs mentioned where we must have both been at.

He looks at venues, venues across the full spectrum; from the toilet circuit to the soulless enormo-domes, the behavioural patterns of the security staff and those occasions when attending a gig and you get the chance to meet a ‘celebrity’, Adan details meetings with Paul Weller, Jarvis Cocker, though these are mere trivialities when he recounts a tale of a friend who not only met but became friends with Dee Dee Ramone… though none of this would of happened if four riled skinheads had caught up with Adam and a car full of mates a good few years back!

‘Down The Front’ is an often amusing, wry look at a way of life, Adam avoids turning the book into an expanded list of gigs he has attended, and at times creates a mirror of you the reader.

‘Down The Front’ is available now from Fast Print Publishing