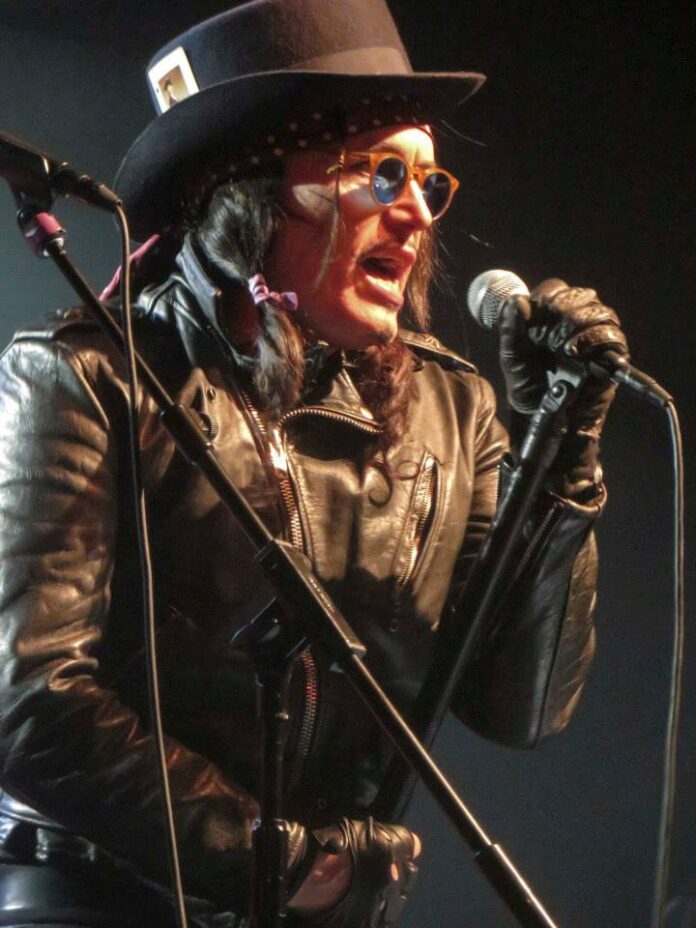 Great live shot from Martin Unsworth – you can find more of them  from him on his Facebook here.)

When it was first mooted that Adam would be returning to the Dirk Wears White Sox album there was quite a bit of excitement.

After all this is one of the greatest post punk/art rock albums ever made- a record of strange pop where artful ideas collide with pure melody, a world of sexuality and strangeness and uncomfortable and challenging scenarios – this is no normal record and a fantastic piece of off the wall darkness that the music press just didn’t get at the time but ended up being a template for so much that came afterwards from the aforementioned post punk era through to goth and then to Damon Albarn’s end of Britpop and beyond.

The beauty of the record is that it still sounds like an undiscovered gem despite it finally selling large amounts after Adam hit the big time in the early eighties.

To add fuel to the fire it was then announced that Adam was going to get the original rhythm section back on board of polythrythmic drummmer Dave Barbarossa and brilliant bassist Leigh Gorman and the Blue Black Hussar was going to be replaced by the Dirk period Adam.

The first night of the tour in Manchester presents all this with a show that is as combustible, confrontational and dangerous as those early Dirk gigs.

Adam Ant is not your average pop star.

Not by a long margin.

He is in the curious position of being someone who is both a punk original- with all that glorious baggage- someone who was a pupil of the Malcolm Maclaren sex, style and subversion school of performer where walking with danger is a key part of the performance art, where confrontation and challenging expectations is an art from. This is the same school of thought that created Johny Rotten-the anti star, the combustible and discomforting presence that jolts you back to reality and if you contrast this with the eighties pin up Adam-the perfect pop star who was an effortless hit machine and understood how to engage with the game then you have a fascinating dichotomy that should never be resolved.

This is could never be a simple retread pop show (thank fuck!) and its reflected in the audience that range from dressed up pirates to lovers of eighties pop to underground bohemians, to the dandy punks to youthful art school music freaks who want to check the real thing-it’s one of the most varied audiences you see for any band and it’s always going to make for an interesting night.

Arriving on stage 45 minutes late after being stuck in traffic to a restless audience who were just starting to get fed up with waiting the band go straight into the longer version of Car Trouble without a word with it’s rarely played long intro and it’s apparent straight away that the current line up is drilled and on fire complete with rough edges that add to the helper skelter of the music. 12 days of rehearsing and Dave Barbarrossa is still some drummer and as he locks in with the divine Jola and we have powerful Ant Rhythms that make the two drummer thing seem so perfect that it’s hard to understand why so few people take this path. Dave’s off kilter rhythms were so much part of the early pre tribal Ant sound that it’s really interesting to hear him play them again.

Car Trouble is a magnificent exercise in tease- that long intro that works around the clashing riffs is a perfect piece of mutant funk disco payed with the intensity of the original punks. Adam stalks the stage dressed in Dirk period black leather (quite literally Dirk period as it’s the same leather jacket as he wore all those years ago)  – he looks a fired up English dandy take on a 68 comeback Elvis and a Jim Morrison but with those sharp angles of 1977 adding a real raw edge as he stalks the stage bringing back the leather sex strut into a rock n rock that is now all kagoul and casual clothes. Dirk Adam is celebrating the ongoing potent symbolism and power of the leather jacket- the smouldering Marlon Brando vision of outlaw cool that was redfined for ever by punk rock and is dusted down tonight. The middle aged ladies and their younger sisters swoon as he throws intense and angled shapes on the stage before the song kicks into part two with the more familiar single version with it’s rousing riff and polishing chrome lyrics.

It’s pretty clear that this gig is a statement of artful intesnity- the first half of the set is most of the Dirk album (the whole album will get played in london on April 19) – Nine Plan Failed sounds as daring as ever- a really quirky yet supremely effective piece of music and Digital Tenderness is like pure pop from a parallel universe with its sparse origonilty and off kilter genius celebrated.

There is an added intensity to the performance tonight, a psychodrama and confrontational edge, maybe because the band hit the stage late the atmosphere already had a spice of danger, maybe it’s because of Dirk’s strange and compelling world that is still beautifully challenging but there is an addictive sense of danger oozing from Adam like he has slipped into the character that created this album in the first place- these are not traditional showman songs but observational and dark pieces that really stand the test of time. The band sound great and it’s good to see Will Crewdson back on guitar again- he looks like he was born to be in Adam And the Ants with his angular body shape and zigzag quiff that becomes part of the colliding riffs of the songs.

Adam tells the audience that Dirk album was to make you feel ‘mildy uncomfortable’ as they deliver a spooky Tabletalk- a song that Adam explains got him into ‘lot of trouble’ the first time round and that’s part of its addictive genius. its also stuffed full of great songs like Cleopatra with its hypnotic riff and Dave’s fantastic off kilter drum part influence by a long lost sevenites funk track as Adam intones a paean to oral sex over the driving riff.

“I may look nice but I’m dirty.”  Adam leers as he vamps up the sex, style and subversion that was the key quotient of the original punk generation and maybe got lost by punk over the years.

Half way through the set they switch to huge hit period Adam with a resounding Stand And Deliver that thrilled the eighties section of the audience and a great run through the the slightly lesser known but maybe superior Desperate But Not Serious and the great glam rock ooze of the anthemic prince Charming with its ‘ridicule is nothing to be scared of’ line that is key for any artist of any type.

This is a rawer walk on the wild side version of Adam, a raw back to the roots of the devils music take on the Antmusic, a glimpse at the heart of rock n roll and as Adam strips off his leather jacket and rips his t shirt as the cranked and raw music drives him on and the cordite sense of danger fills the room, the whiff of sex and danger combines with the music into a heady and intoxicatingly dangerous brew.

This is no average show, no tame revisit of the chords and beats of past moments of glory this is a celebration of the moment and a rekindling of the fire in attitude and pure feel and artful intensity that created those great songs. There can be no encore as the curfew at the venue was breached and the night ends abruptly.
Adam Ant didn’t just turn up and play old songs tonight he became them and that’s a rare, rare thing to see.