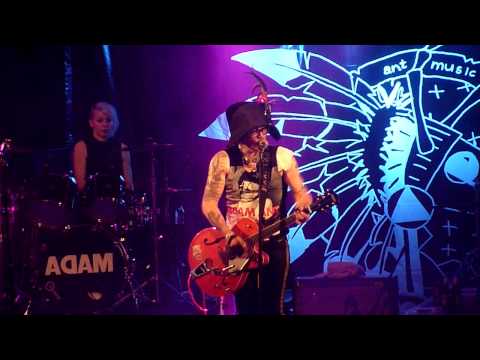 Anticipation and apprehension were the two main emotions coursing through me as I arrived at The Palace, Melbourne for Adam Ant’s first gig in town for more than 30 years. Sure, I had been one of the screaming thousands at Festival Hall last time he performed and quite frankly, the teenager still in me was hoping to relive the moment.

I needn’t have bothered with apprehension because Adam strutted onto that stage on Friday night, full of confidence, to launch into the first song Plastic Surgery. He’d promised not to let down the die-hard fans who lapped up each treat including classics such as Dog Eat Dog, Car Trouble and Ants Invasion. What was truly brilliant was the way the pop and the punk melded. Stand and Deliver seamlessly followed Deutscher Girls while Zerox was the prelude to Ant Music. Each song accompanied by the strident and distinctive dance moves of old.

Adam doesn’t talk much on stage. Highlights were a brief hello, a thank you to TV talk show host Adam Hills who had interviewed Adam earlier ( co-incidentally Hills was standing behind me at the gig and was chuffed by the shout-out) and a dedication of Ant Music to ailing Australian music guru Molly Meldrum.

As he ripped his black tour T-shirt to his navel, a portion of the crowd actually squealed. The musician, draped in jewellery and more tattoos than I remembered, brought his style, his passion and his unique flavour to make for a memorable gig. He’s definitely still got it. What you do have to admire about Adam is that he’s done it reasonably tough in a vicious world but he’s survived. His sense of pride showcased in a two hour gig that had fans baying for more. And they got it. The encore was fittingly Prince Charming, complete with the dance salute, albeit slightly modernized.