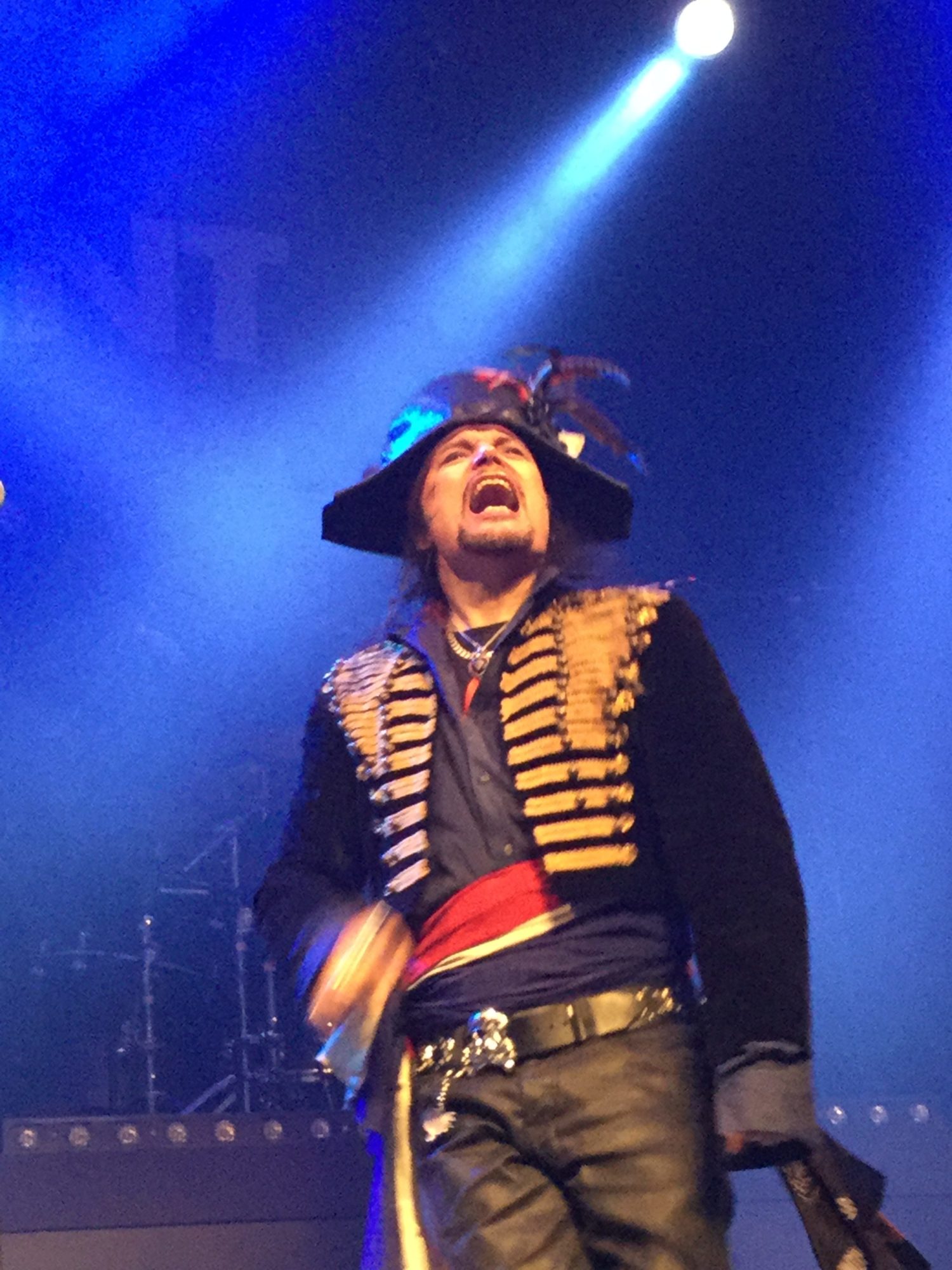 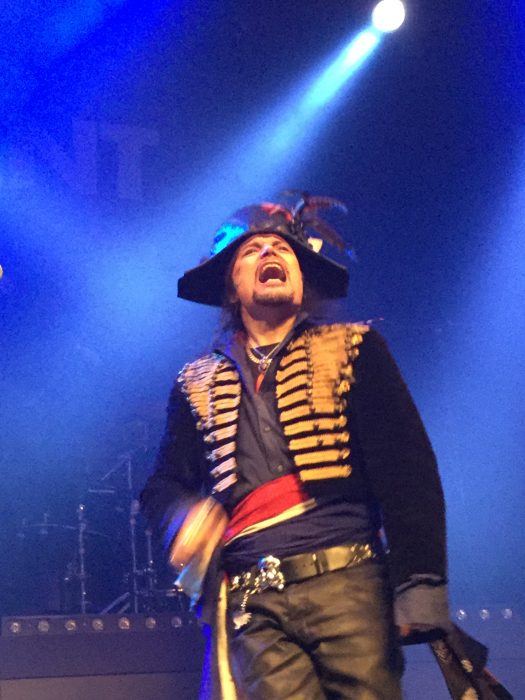 Adam Ant revisits his classic Kings Of The Wild Frontier album. LTW boss and Membranes frontman John Robb was there to celebrate this pop art spectacle…

Tonight is a celebration of pop as art.

Of course Kings Of The Wild Frontier is one of the great albums -nothing this exotic, strange and ground breaking and imaginative would often get released as a pop record. For breathtaking scope and imagination and daredevil dayglo musical brilliance you would have to go to the Beatles or Bowie or similar sonic shapeshifters. That Adam pulled this out of the wreckage of punk and his own band makes it more remarkable and the album that sung of warrior sprit, native Americans, sex the revolution of the everyday is a timeless work.

Whilst we wait for a new album, the mooted and fantastically titled Bravest Of The Brave that is being worked on, these celebrations of older albums actually makes full sense with Kings being an intriguing proposition.

For an album that terrified purists and broke Adam from the punk monochrome this was a daredevil move, a work of CinemaScope genius and breath taking originality. In ye olde punk days being a pop star was a crime against the revolution despite the fact that the Sex Pistols, the Clash, Buzzcocks and even the Stranglers all operated as pop bands. Only Adam took it one step further and this extraordinary record and extraordinary breakthrough into the mass consciousness with a record so daring and thrilling is what we are here to celebrate tonight.

This evening it is delivered perfectly, the band is now in perfect form – insanely tight and powerful they do the huge range of varying tunes a service respecting the subtleties and never overplaying. They enjoy the nuances of a music that switches from the Burundi thrills of the title track and the thrilling drum thunder and guitar twang of Dog Eat Dog to the spaghetti western of Los Rancheros to the feedback driven war drum pound of Human Beings – a song that opened the door for for many younger ears to an exotic and experimental underground and a song that would still not sound of place on a Swans album or a similar noisenik trip. And then of course there is the surging, life affirming Antmusic – a slice of perfect pop and the sort of poetic stomping deceptively simple but totally addictive genius guitar pop of Bolan at his prime.

And then there is Adam himself looking ridiculously good for a 62 year old pop icon – his voice is in perfect shape and he still inhabits the songs with that powerful intensity that was so fantastically out of place in the mainstream when these songs were chart toppers thirty years ago. In the world that we all then inhabited intensity was a key word at the time. It was what we defined our music by and Adam always understood this.

I’m sure he welcomed the pop stardom – who wouldn’t? Especially when he was natural at it, that rollercoaster ride looks like great fun but at heart of hearts he was always an art school musician whose muse was closer to Wire and other media faves – he certainly could stretch the musical fabric as much as those bands but also knew he was a natural pop star – and that mass popularity has sometimes clouded his artful brilliance.

It’s that dichotomy that has always been fascinating – a dichotomy that David Bowie and Marc Bolan played around with in the seventies. And like Bowie, Adam Ant was about shape shifting music and image and ideas and its the revisiting of these roles that actually works years later and makes this restating of the Kings Of The Wild Frontier album so perfect. Of course the image was key and if tonight there is no iconic white stripe it was that simple line across the face that sparked this whole thing off – that dress up like a warrior and got to war vibe was intensely attractive at the time when pop culture was the frontline. Add to that the military jacket – a nod to the free form dazzling genius of Jimi Hendrix and the rock n roll piratical leathers – it was like all the strands of ideas from Malcolm and Vivienne’s shop come to life in the hands of someone who really knew how to utilize them. Kings was, arguably, a summation of all the idea from the heart of punk – a combination of the key words like sex, style and subversion, empowerment, situationist, pirates rampaging in the suburbs, native American warriors, the outlaw, the biker rebel, the anarchic fifties R’n’R – it’s all in there somewhere. Tonight Adam nods to all that and adds his tricorn pirate hat – a defiant and brilliant motif that somehow nods to the 68 riots in Paris and the French Revolution and piratical pillaging all at once – this is pop culture as history and bricolage and insanely it still looks great.

A couple of years ago he inhabited the dark and dangerous undergrowth of Dirk Wears White Sox and re-evaluated that album as brilliant quirk pop with a dark undercard whilst with Kings Of The Wild Frontier it’s almost the other way round – a chance to acknowledge the music’s artful brilliance that was far ahead of most of the John Peel underground and yet still great pop.

If there was ever an artist that was suited to this classic album revisit format then it was Adam Ant, his albums were fantastically 3D strange but always perfect pop pieces but what is crucial here was that they were fully theatrical – the music was made for the stage and the full production – a full 3D cinemascope sound that is perfect for revising as a full theatrical piece which the stage is set for. The Elvis style Adam Ant written on the drum riser underlines his iconic status and the twin drummers perched above perfectly recreate that crucial drum rumble with the charismatic Yola receiving a huge cheer for her rhythm endeavors.

The album is played out in full and yet again you can’t help wondering how something this bizarre become the biggest album of the year – maybe it was the empowering subject matter – that idea of being the warrior that struck a chord in downbeat UK – it was like the punk mission statement reshaped and reimagined and colours din from the monochromatic version that was now proliferating, maybe tit was the music – that combination of ideas be got of the wily old fox Malcolm maclaren for a grand and his own wild imagination and broad musical taste and that initiative feeling that this wa the moment when pop could be wild and daring.

He really as out there on his own. Those TV studios were full of oafs. Sometimes erroneously dumped in with the new romantics, I mean does any seriously think that he has anything in common with Duran Duran or Spandau Ballet? Tonight underlines this with the second set which is full of b sides and obscurities cranked to perfection and welcomed like old friends.

I bump into former Sex shop icon and Ant -manager Jordan and she is on the nail when she says this is the best she has ever seen Adam – time has been generous to the singer in so many ways but has also given him the chance to finish off those complex and strange songs like Red Scab which is explosive tonight or Physical which still drips pure sex in that grinding heavy groove that Trent Raznor still wishes he could have written or the quirk pop rushes of Xerox and a venomous Press Darlings.