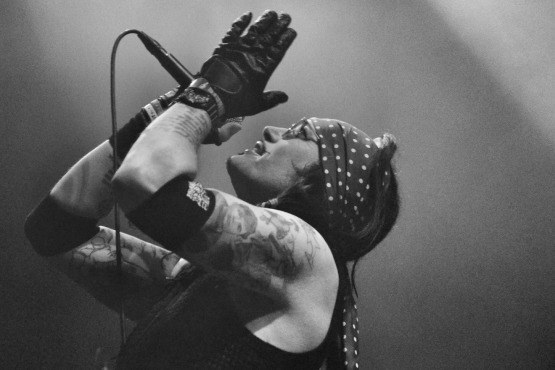 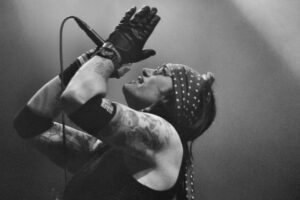 The legendary Simon Price was one of the handful of journalists who believed that Adam Ant could pull of his comeback a few years ago. Proved right he returns to see the great Antman deliver a brilliant celebration of his classic and influential Dirk Wears White Sox debut and sees Adam come up trumps yet again.

No wonder that Adam Ant still feels he has something to prove. He’s been facing down the doubters from the very start.

If he’s been written off in the present tense as an erratic, flaky and unreliable lunatic in the light of his well-documented mental and legal problems (when, in reality, his live performances since his 2010 comeback have generally gone from strength to strength), he’d be forgiven for laughing a hollow, rueful laugh. He has, after all, seen it all before. In the late Seventies, Adam And The Ants – despite, or perhaps because of, the rabidly loyal following who attended their gigs – were dismissed by the punk cognoscenti as something of a joke band. Adam was an outsider, even among the outsiders.

He would eventually, of course, have the last laugh by turning himself into a Boy’s Own action figure in human form and becoming the biggest pop star on the planet. But first, this incarnation, Adam Ant Mk I – a psychotic and perverse leather boy with stiletto-sharp sideburns and a whip in his valise – would release the Ants’ debut album in 1979, the arty-peculiar, clever-silly, fragile-tough Dirk Wears White Sox.

Over the years, Dirk’s status has grown, a process which arguably began in the Nineties when Elastica referenced the album’s insert booklet Catalogue by stealing its design for their own Elasticatalogue, and has now reached a stage where, ironically, Dirk Wears White Sox IS the Ants album of choice to punk cognoscenti. It’s a testament to the reverence in which DWWS is held that, having already played it at Hammersmith Apollo earlier in the year, Adam can still fill the Islington Assembly Hall, a magnificent Grade II-listed 1930s theatre, on four successive nights for an album which doesn’t feature any hit singles (unless you count “Cartrouble”, a post-Antmania Top 40 entry on its reissue in 1980), with fans making the pilgrimage from as far away as Finland.

Recreating the album in its entirety on its 35th anniversary, for which it has been reissued on white vinyl, he’s assisted by an excellent band, featuring the requisite two drummmers – a trick Adam swiped, of course, from The Glitter Band – and, most impressively, guitarist Will Crewdson (formerly of Rachel Stamp) who, having recently played with Bow Wow Wow, is evidently London’s foremost go-to guy for restoring the legacy of Matthew Ashman. Or, indeed, that of Marco Pirroni. (Crewdson once told me an amazing story about seeing a tassled biker jacket in Camden Market, buying it because it looked like the sort of thing Adam And The Ants would have worn, then looking in the pockets and finding Marco Pirroni’s gym membership card. Which is mind-boggling on at least two levels.)

The twin drummers strike up the introductory doof-doof of “Cartrouble Part 1”, and Adam enters looking markedly less piratical and more fetishistic than in other recent tours, in black leather trousers, leather boots and leather coat, matching the mood of Dirk and the era it represents. In fact, the show amounts to one long slow strip-tease, as the coat, and then the white shirt underneath, are removed. It’s all too much for one heckler, who informs Adam “We all want to fuck you!” He reacts with the gracious smile of someone who’s heard all THAT before, too.

The album’s delivered straight, without much mucking about, other than the bizarre last line of “Family Of Noise” – “…in Croydon!” – changed to “In Croydon… In Croydon… Why Croydon… Why not?” (He is, one imagines, sick of being asked to explain it.)

One thing that becomes clear, over the course of the night, is just how strong Dirk’s influence was on post-punk musical trends of the early 1980s. At a recent panel discussion at the British Library, titled Goth: The Scene That Wouldn’t Die!, The March Violets’ Rosie Garland and Louder Than War’s own John Robb both agreed at a recent panel that Dirk Wears White Sox was one of the records, along with the Banshees’ Join Hands and Joy Division’s Unknown Pleasures, which invented Goth. Hearing the lugubrious “Tabletalk” tonight shows how right they were: it’s proto-Bauhaus, essentially. Similarly, “Animals And Men” anticipated the New Romantics’ interest in Futurism by namechecking the Futurist Manifesto and the Italian movement’s leading lights (“Marinetti! Boccioni! Carra! Balla! Palazzeschi!”).

The highlight, for me, is the hilariously spiteful “Catholic Day”, in which Ant is seemingly crowing at the assassination of JFK: “No more messing round, playing with Monroe/No more turning on the middle-aged ladies” and “I see the chickens have come home to roost…” There are, however, lines you’d never get away with now, most strikingly in the album’s closing track “The Idea”, which begins “I went to the zoo to look at the animals/The first thing I saw was a wallfull of handicapped…” A couple of verses later, it redeems itself with the brilliant “I could be religious… if they set the hymns to disco”. Thus ends Dirk Wears White Sox, still as baffling and brilliant as it was in 1979. Perhaps, when dislocated from its era by such a distance, even more so.

Adam isn’t done yet. There’s “A.N.T.S.”, a daft rewritten version of Village People’s “Y.M.C.A.” given away with a 1981 edition of the short-lived but utterly brilliant Flexipop! magazine. There’s some chat about Joe Orton and Christine Keeler, and a sit-down section including “S.E.X.” There’s an unexpected excerpt from the Prince Charming album in the shape of “Picasso Visita El Planeta De Los Simios”. There’s a pulverising “Physical (You’re So)”, and a razor-sharp “Zerox” with Adam himself strapping on an electric guitar.

There’s a crafty bit of misdirection when Adam mentions the Screen On The Green a few hundred yards down Upper Street, arthouse cinema and scene of legendary punk happenings (including the Sex Pistols show that a Wembley Stadium-sized number of people claim to have attended). Many of us are already whooping with excitement, expecting the exhilarating “Fall-In”, which namechecks that venue. Instead, we get a song the Ants used to rehearse there when the owner let them borrow it from midnight till dawn: the haunting “This Strange Effect”, written by Ray Davies but first recorded in 1965 by Sheffield rock’n’roller Dave Berry.

In 2015 it will be Kings Of The Wild Frontier’s turn to get the 35th anniversary reissue treatment. “I’m thinking gold vinyl”, he tells us, and there’ll be more concerts. As a taster, he gives us a thrilling double-whammy of the tribal hits “Kings Of The Wild Frontier” and “Dog Eat Dog” during which he rips his T-shirt in half from the neckline to show that he is, as he boasted last time I saw him live, “the only punk whose chest hasn’t fallen”.

Those tracks’ lyrics of self-determination and warrior pride seem to galvanise something within him. “Sorry for getting a bit passionate during those two songs,” he says, pacing the stage with a steely stare, as if looking for someone to pick a fight with. “But I still mean every word.”

When the KOTWF show comes around, and Top Of The Pops Adam is back, we’ll really see who’s “turning on the middle-aged ladies”. For the time being, it’s truly been a kick to spend time with Arthouse Adam. Point proven, and in some style.