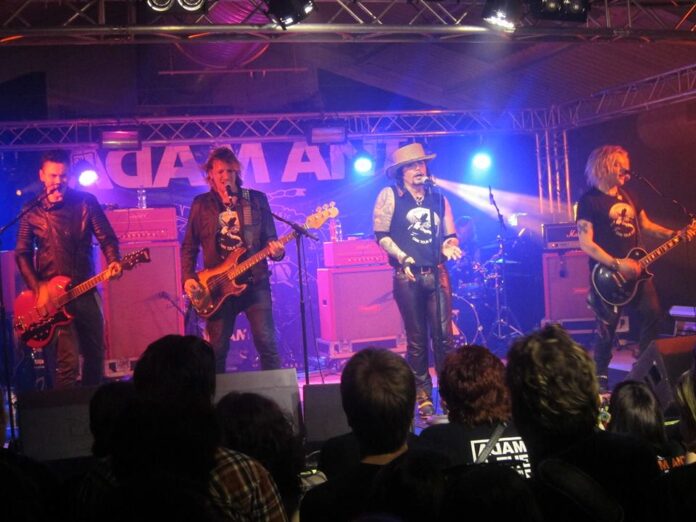 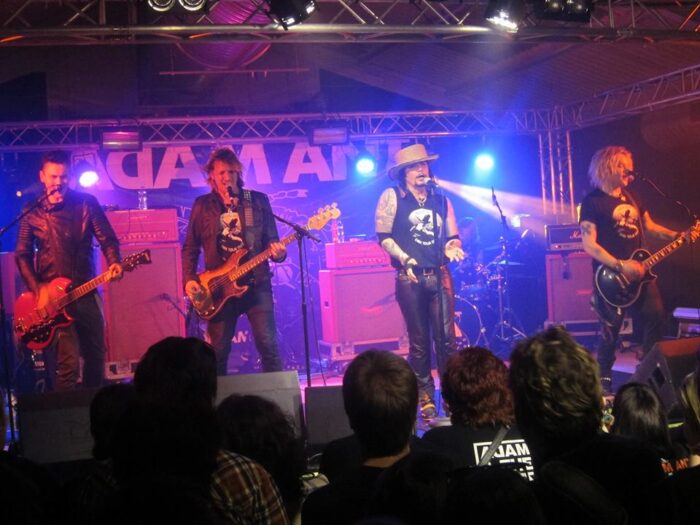 Adam takes his Dirk Wears White Sox show around the country. Ged Babey was at the Southampton show. Photo, above, © Steve Little-Triggers.

“Well, he certainly hasn’t lost it…”

“He is, without a shadow of a doubt, the greatest performer I have ever seen.”

“Blown away, just blown away, that was fookin’ amaaazing.”

The reactions were pretty unanimous. That was a phenomenal gig. Nearly two hours of Antmusic for Sex People (and only one ‘hit’ from the white-stripe-across the nose days.) It really is hard to believe Adam is sixty. And his band are extremely good.

Southampton has been starved of really good gigs of late. The new Engine Rooms, despite resembling a small aircraft hangar, looks like it’s gonna turn things around though with Julian Cope, Wire, Babes In Toyland… proper bands lined up instead of just kiddy-emo.

I’ve resisted seeing Adam live over the past few years as I didn’t want to be disappointed. His early stuff up to and including Dirk Wears White Sox meant everything to me.

Whilst a schoolkid I was at the infamous 1978 Salisbury Tech College gig  and was knocked unconscious by a Hells Angel wielding a bottle. I still have the lump on my head to this day. Bizarrely, though, the songs I heard prior to pogo-ing on an Angels toes in my “silly Cuban Heels” have stayed with me.  Lady, Physical, Whip In My Valise I not only associate with pure sex but total violence and the ultimate in rock and roll.

Vague fanzine started in Salisbury too. I had all the early issues and would voraciously read Tom Vagues tales of being a Soldier Ant on the road.

Dirk Wears White Sox was, to me, the defining album of the post-punk era and the gateway album to positive punk ‘n’ Goth. It is probably the album I’ve played more than any other. The 2015 line-up of the Ant band replicate Dirk to perfection.

A couple of songs in I had one of those road to Damascus revelations (which to most people is probably the bleedin’ obvious); I noticed that a large proportion of the audience were singing along or mouthing every single word or at least nodding and noting every time change and nuance of every song.  We ALL know Dirk off by heart. It means so much to a lot of people. (I thought it was just me and Tony and John, y’know a select few…. but it’s a select many. That said, this was one of the few dates on the tour that was not completely sold out.)

I’m not even going to mention the appalling support band because I didn’t catch their name. They did, however, do covers of Prince’s Sign O’ the Times in a clunky MOR Metal style and a version of the Police’s abomination ‘Wanking On A Spoon’ as I’m told it was re-named in the playgrounds of Southampton.

The second half of the set was absolutely sublime. Ridiculously perfect. From Plastic Surgery to You’re So Physical it was the pervy-sex Ants album that never was (if you don’t count the Bootlegs and disc 1 of Antbox). The only thing that could’ve made it any better would have been Jordan appearing to screech through Lou.

Personally, I can’t understand why Adam would want to re-visit Kings of the Wild Frontier when there is a double album of the early stuff just begging to be re-recorded by this shit-hot band. He was so prolific back then. From the Syd-Barrettesque Punk In the Supermarket to the pitch-black-humour of Dirk Wears White Sox (the song about concentrating on camp.)

But I digress(ed). This should have been and could have been the ‘gig of the year’ and to some maybe it was. It was almost ruined for me by a small section of the audience.  I will call them the statues. People who remain rooted to the spot and having found their chosen vantage point, will not move. They usually have an electronic device held aloft and view the action thru a small screen.  They don’t like people who dance and they shove aggressively and scowl at anyone who does. How can you NOT dance to Plastic Surgery, Lady, Fat Fun…?

The huge irony wasn’t lost on me, that thirty six years on from being bottled at an Antz gig, I really, really wanted to glass the bloke in front of me who refused to accept that occasionally people dancing might jog his arm or knock into him.  It’s not good manners to scowl and spit fuck off through your teeth when surely we are all here united in our love of Adam and his art? Whilst yes, there is a lot of ‘theatre’ about Adam, surely when he sets his hymns to disco (Like this), you have to dance? You don’t it seems. Living statues everywhere. One musclebound bloke even tapped me on the shoulder, indicated I should stop dancing with a gangsterish tilt of the head and hard stare.

When did people stop dancing at gigs? When did going to a gig become such a passive experience? Asked my tiggerishly bouncing friend Tony. “Over-consumption of passive entertainment has dulled the nations’ ability to actively participate in life” replied his friend Allana wisely.

Anyway. Adam Ant is still an inspiration. Dirk Wears White Sox remains an un-matched album of bizarre, perverse songs that take in madness, sex, history and the Futurist Manifesto. New life was breathed into it. The only thing that dates it is the use of a term which is “unacceptable” nowadays, which Adam could subtly replace but doesn’t. If he did he be criticised though, so he’s damned either way.

There are eight more dates on this tour… which are not to be missed… and hey, Kick Over the Statues for me. 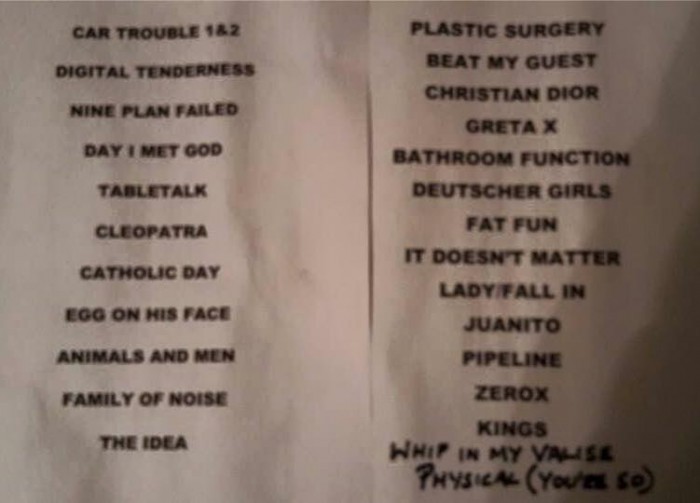