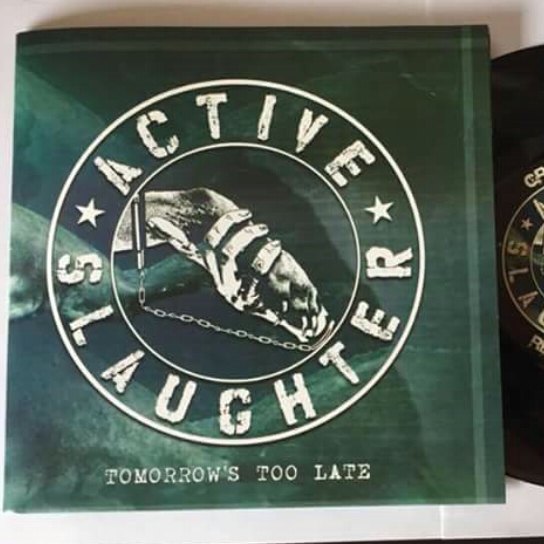 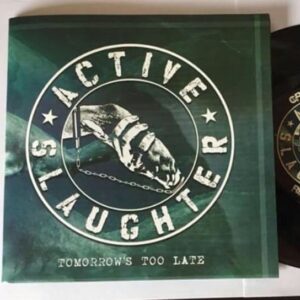 Active Slaughter – Tomorrow’s Too Late (Grow Your Own)

Active Slaughter were a band borne out of frustration at the lack of progress being made with regard to animal abuse and human freedom. They made a name for themselves from the late 90s until the mid 2000s with a stripped back sound taking on the old 80s anarcho-punk approach of putting the message before the music. Then the North Londoners split when a member was given a prison sentence for animal rights activities.

Active Slaughter reformed last year with original guitarist JJ taking on vocal duties after the collapse of SLUG and hit the road. They have had a couple of line up changes on the way but this recording is the quartet who were doing the rounds last autumn. Powering them along is the enigmatic Trev who drums for so many punk outfits that he was able to hold “Trevstock” earlier this year, playing for 5 bands in a row!

To employ a favourite trope of fellow LTW writer Ged Babey, I’ll tell you that Active Slaughter “mean it, maan”. The first of 3 tracks, Sea Shepherd is a speedy little number, reminiscent of mid 90s US anarcho punk bands for some reason, particularly with Jeannie’s additional vocals. The slide style guitar solo from Phil is very DK. As the give away title suggests, the song starts off describing whalers in hot pursuit of their prey and the bloody scene that ensues, ending with a stark warning that Sea Shepherd are on their case. Your average whaler will not be playing this, but AS are singing about what moves them. Sometimes music can change things but sometimes screaming at a wall just feels like the right thing to do.

Innocence denied – a song about sexual abuse scandals being covered up to protect the rich protagonists – says what so many of us think: “The men of cloth, men of suits, men of wigs; defending their own in the playground of the rich”. Maybe it’s the long choruses, maybe it’s the delivery, maybe it’s just the tune, but this one has a hint of Icons of Filth to it.

The B side Three Million Dead Tears is a reworking of an old AS staple. A more mid-paced chuggy, bouncy, tuneful number with a shout-along “Outrage!” to start every verse. Focusing on the horrific activities of Huntingdon Life Sciences it questions the hypocrisy of people opposing animal cruelty in battery cages or on game hunts while lining the pockets of companies who torture animals to make their products. It’s a protest song that sounds like a protest. Re-read that title. Three million dead. Three million animals tortured for monetary gain and very little prospect of any scientific progress. That figure should move you. Even if you think animal experimentation is in some way justified (which I don’t), the sheer volume of lives destroyed, of suffering, is indefensible. The megaphone style spoken section in the middle places you in the street demonstration before the “Smash HLS” chorus takes you to the close, with a listing of companies who carry out vivisection in the run out. Punk is still be a medium for protest and change as this song demonstrates, and while the reach may be limited, it only takes 1 listener to respond for the impact to be felt.

The sound on the A side is a little doomy, almost subterranean and while I initially thought it could have done with a little more top end (treble) in the soundscape, on reflection it is actually heavy and it just needed a dose of extra volume. On further listens it struck me that the sound recreates the dark claustrophobia that abused animals and humans suffer. That’s art, that is!
I’ve written before about how Grow Your Own releases encompass more than just the vinyl. The cover for Tomorrow’s Too Late folds out into a poster painted/created by bass player, Jeannie, with whales and missiles covering the animal rights/eco/anti-war bases of anarcho punk.

Get the record or download from Grow Your Own or from the band (and catch up with the progress of their imminent album) via Facebook.