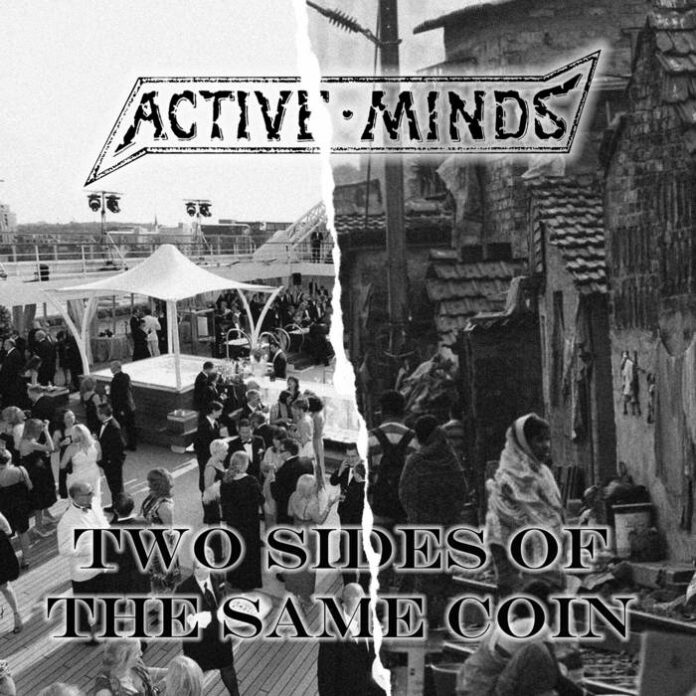 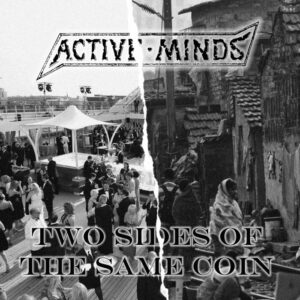 The latest EP from Scarborough’s two-piece thrash machine challenges global inequality and apathy in 6 tracks that surge from melodic hardcore to power violence thrash, distilling issues into micro manifestos that somehow work as songs. Nathan Brown loves the sound and the look of the record.

The cover art for Two Sides Of The Same Coin is born from the stables of both Crass and Discharge. With a two-image montage, it demonstrates the divide between opulent wealth in the global North and poverty in the global South, but rather than use some fancy photoshop to create the divide, the EP cover is actually ripped! This tactile analogue approach in an ever-increasingly digital world pleased me more than I can convey.

Active Minds have been around so long they should stand in their own right and not need comparisons, but their output has been so varied that beyond a signature guitar sound it is difficult to pin down definitively. Their sound has always been rooted in European hardcore but they snatch aspects of various styles here and there to add the odd twist.

On the A-side, we find Active Minds at their more tuneful. The tunes and style draw inspiration from melodic hardcore that bands like HDQ, I-Spy, Four Letter Word and Toxic Reasons did so well. A bit of a jangle in the guitar department, which always makes me think of Dag Nasty for some reason. The Ones Who Are Left Behind tells the human story of two old people left behind by the economic advances in Russia. It is illustrative of the way small people are crushed so that others can horde vast sums of loot. Another Pleasant Valley Slum Day (winning song title) takes its cue from The Monkees song (but not the tune I stress). The verses are more of a mini-essay, as is so frequently the case with Active Minds songs.

“Out there, it’s another peasant valley slum day
Back in exploitation land.
We don’t leave enough to make their ends meet.
When will we start to understand?”

Insightful, thought-provoking lyrics that hold a mirror up to society yet somehow also work as a song. Maybe it’s the Yorkshireman trope of saying it like it is, but they don’t waste words and get to the point. Despite the clarity of their messages, additional paragraphs for all the songs on the EP provide more depth and insight. These days you’d call them “liner notes”.

The B-side has a razor edge guitar slicing through it. Behind The Ironic Curtain is all speedy guitar and thrashing drums. Two Sides Of The Same Coin ups the ante hitting warp factor MDC with a hint of crossover. “Extreme poverty. Extreme Wealth. You Figure It Out” – in 8 words they sum up the overall theme of this record. Surging from one song to another, they turn the notch up again and One In A Million most definitely hits warp factor Power Violence. Manic drums, cymbals aplenty as drummer Set hits Animal mode, and Bobs letting rip with gnarly yeaarrrghhhh vocals.

Having set out the wrongs of a global economic system based on inequality, Wanting A Future Is So Passe finishes off the EP by challenging the apathy that has sunk into many former activists as they have aged. This is a slower song and the heavy riff has a big sound with shades of Discharge and their ilk complemented by a woah woah singalong chorus. They thumb their nose at The Who while they flip their youth cult message: “Yes I’m talking about my generation. I hope I get old before I die.”

Always thoughtful, frequently varied in sound but always identifiable, the indefatigable Active Minds surely have a Dorian Gray in their attic.

Get the EP from the band via Bandcamp and find details of international distribution on their Facebook page.