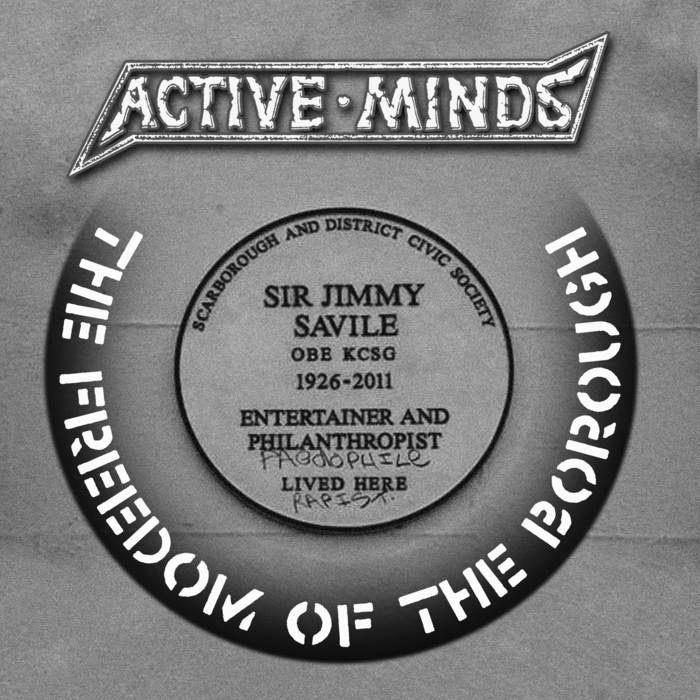 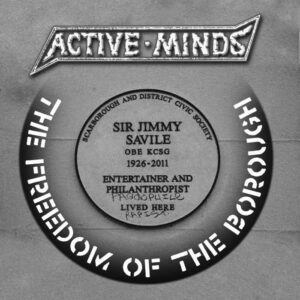 The Freedom of the Borough

Nathan Brown reviews the latest irreverent 7 inch slab of vinyl from one of the most prolific bands on the international DIY HC/punk scene – Scarborough’s manic punk thrashers Active Minds.

The cover says it all. A photo of the commemorative plaque “Sir Jimmy Savile lived here” and someone has graffitied “Paedophile” and “Rapist” to complete the “Entertainer and philanthropist” description underneath. Never ones to hold back from destroying sacred cows (although not literally as they eschew eating animals), Active Minds have turned their focus onto their home town of Scarborough and 2 of its most infamous residents.

Freedom of the Borough is a nodalong mid-paced punk tune with the trademark gritty Active Minds guitar tone, but by the end Bobs is almost losing his voice with disgust and exasperation. As the title of the song makes plain, not only were Jimmy Saville and Peter Jaconelli notorious paedophiles but they were also held in such high esteem that both were awarded Freedom of the Borough of Scarborough (nothing compared to some of the other accolades that Saville received, but still…). It speaks volumes to how friends in high places cover up and facilitate abusers.

Following on from the title track is a cheeky little thrasher that could have come from one of those classic Scandinavian bands like Anti-Cimex, with manic drumming from Set including a drum roll nicked off mid 80s Chaos UK (see my earlier review of the last Active Minds LP for more on his drumming).  There’s even a blistering solo trying to fight its way through the thrash.  Politics with a big “P”, The Left Need Some New Answers flags up the danger that if the political left do not find answers to the problems facing the poor, the far right will fill that void. And then, as they say, “we’ll all have to pay”.  Not wrong there.  But I somehow doubt many of those who need to hear that message will be playing this!

Bandcamp link  The Freedom Of The Borough by Active Minds

Hero Today, Gone Tomorrow is a nice play on words, and an old mainstay topic for punk songs since Discharge’s first release but sadly still all too relevant. Army recruitment advertising always leaves out the bit about killing other people and getting blown to pieces. The music is a short sharp blast in the Napalm Death/Electro Hippies/Heresy field. 13 seconds only, chumps.

A Million Friends returns to a theme that was central to their last LP, the way that social media and the internet creates a distraction from reality, often at the expense of real life. Tempo changes keep you on your toes and the occasional blasts reminded me of someone occasionally putting their finger on the button of a food processor. Mmmmmm….home made hummus. Has anyone made a song using a food processor? Sorry, got distracted.

An axe edge riff with something of an AC DC sounding start and a tuneful woah-oh-oh chorus is the vehicle on the next song to make an important point that we are ending up living in “bubbles” that only serve to reinforce our views (and perhaps fool us). Voice Your Opinion celebrates and encourages people to share how we think and feel. Tapping into a theme that has been with punk rock since the start. “Go on, say something outrageous”, “You’ve got one chance to say something and all you can do is squabble with each other” etc.

Nothing To Hide? uses the example of Jean Charles de Menezes to demonstrate that the response “If you’ve got nothing to hide, you’ve got nothing to fear” to people who (rightly) argue that encroaching state control and monitoring is wrong doesn’t really stand up to scrutiny. A little Discharge styling here and there in the vocal department, over a Doom or Totalitar style riff.

Finishing it all off, I think Too Shit For Words deserves to be awarded the prize for best song lyric about the far right: “You say we’re becoming an Islamic state – you think you justify all of your hate. I’d expect more intelligence from one of my turds. Your so-called ‘opinions’ are too shit for words.” Short, sweet, to the point and funny at the same time. It’s serious but we have to laugh or we’d cry.

If you are expecting angry political punk thrash that is relevant and intelligent this has it for you. Just under 12 mins they packed in as much as you can fit on a 7″. If you’re looking for something else keep walking, but maybe have a think about what they are saying.

Buy it via bandcamp or Discogs and find the band on Facebook.