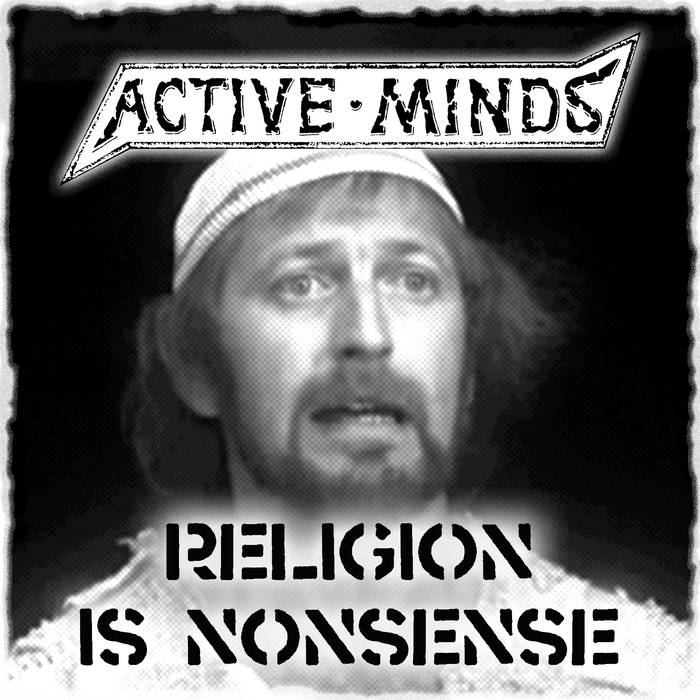 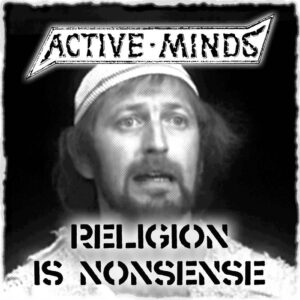 I reckon Active Minds have played a masterful stroke with the cover of this latest 10″.  What you get inside the plastic sleeve is a screen printed pic of Brian (as in Life of…) on cloth.  They’ve only gone and created their own Turin shroud, ain’t they? Should you choose to use that as a back patch there is another image on the fold out sleeve, just as strident as the shroud.  An image that may have been stolen from any of the major religions depicting smiley people ascending to heaven – but then emblazoned across it “Billions of people across the world believe the fairy tales they were told as children are actually true…”  Jesus flipping the bird on the vinyl label is the icing on the cake.

Musically, Active Minds cover many of the bases of the thrash punk genre.  We’ve got the short sharp numbers, the slightly tuneful nod along catchy ones, the ones that clearly have their roots in Discharge and Sweden’s best imitators of that band.  Four of the songs last over 3 minutes (one of them even topping the 4 minute mark).  You can’t escape the roots of Active Minds in the 80s thrash scene that brought us Electro Hippies and their ilk, and saw an explosion of Scandinavian punk.  And why would you?  A lot of records from that era are going for ridiculous sums among collectors or undergoing re-releases so they have clearly stood the test of time.  Whilst mostly raw and closer to a Husqrvana or Stil than Johnny Ramone ever managed, there are several songs when the guitar takes on a melodic approach and nods towards the likes of HDQ and Leatherface.  Of course there is a solo that sounds incredibly similar to the one on Doomsday by Discharge, but you won’t hear complaints from me. And on Ritalin Generation they also manage to pay tribute to a riff from hardcore progenitors Bad Brains.

As outlined in a previous review, Set the drummer is a machine or Animal from the Muppets, take your pick.  Rather than stick to a formula, Active Minds happily shift a gear from breakneck to plodding punk and can slow right down to an almost ballad-esque sound.  The vocals vary between apoplectic rage and tuneful singing, complete with backing melodies.

Listen to Ritalin Generation from Religion Is Nonsense here:

Lyric-wise, it’s no surprise that religion is on the receiving end of the band’s ire, in particular the way it wields power, controls people and is a front for sexual abuse. But rather than a single issue release, this record also shines a light on knife crime, social media, hero worship, nationalism and xenophobia, intolerant bullies, the use of ritalin to supress kids. As if to provide a summary there is a call to arms to create a better world in the final track Life Is A Political Action.

It’s a cliche that Yorkshiremen speak as they find and this Scarborough duo pull no punches.  They tell it straight.  When the entire song lyric delivered in 11 seconds is “I don’t care what your invisible friend has to say.  Religion is fucking nonsense.” they have summed it up in the proverbial nutshell.  This is one of the great advantages of the short thrash song…it forces you to distil everything into as few words as possible!  It may lack nuance.  So what!  It may lack balance, but then punk rockers are not state funded with a duty to provide balance!  Balance isn’t always a good thing – take for instance climate change.  As a journalist said recently, if it’s raining outside, you don’t seek opinions on whether or not it’s raining.   This is not to say that Active Minds do fail to possess deeper understanding or over-simplify issues.  Far from it, their (often brief) socio-political commentary is accompanied by what has become their trademark – a mini-essay in the sleeve notes for each song in case you need clarification for their unambiguous lyrics, but really it’s to provide context and further information than can be achieved in the length of a song.  Intelligence always prevails.

The lads have always been fans of VFM, carrying on the tradition of “Pay No More Than” tags that Crass implemented.  So whilst 12 tracks clocking in at just under 26 minutes is fine for an album by most bands, Active Minds have reasoned that this can all fit onto a 10 inch and save the punter (and planet) a few quid.

Get the 10 inch from the band’s Bandcamp site or catch up with Active Minds on Facebook.