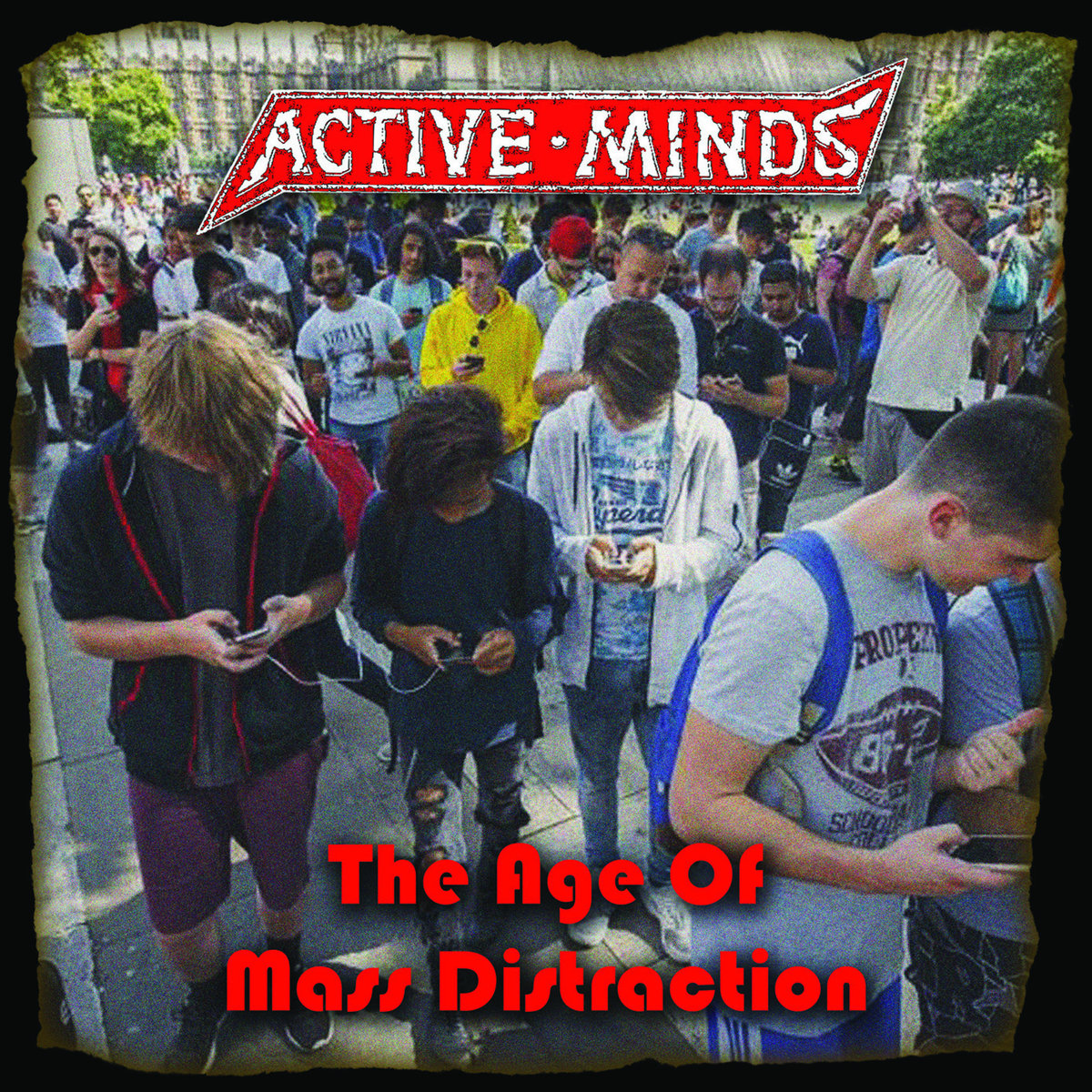 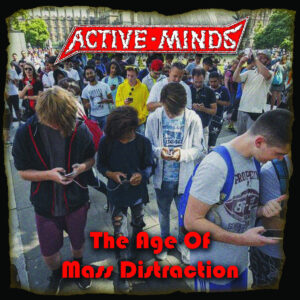 In their 9th album Scarborough’s Active Minds take on the economic catastrophe we are living in and how the masses are kept distracted.  Louder Than War put down the smartphone and put on the vinyl.

The Roman elite knew that bread and circuses would keep the populace distracted enough not to question their excesses or threaten their control.  Today it’s smartphones, celebrity culture and a consumerist life style.  Interestingly, historians have oft argued that a society which becomes overly decadent is one about to decline.  That might not be a bad thing, as long as we don’t irreversibly fuck the environment on the way down.  And that is pretty much the thinking that drives the 9th LP from Scarborough two piece Active Minds.  Ever get the feeling you’ve been conned? They do!

Active Minds own brand of intelligent political hardcore thrash is well known on the DIY punk circuit throughout Europe.  This band don’t do subtle. Song titles spell it out. And while the lyrics are for the most part direct polemic, each song comes with a mini-essay devoted to the subject matter on the lyric insert. This is something that they have done since their first LP Welcome To The Slaughterhouse back in 1988.  It’s always been one of the glaring inconsistencies within political punk that lyrics are often pared back to the minimum while exploring complex subjects such as economics and power imbalances in society.

As anyone who has seen Active Minds on their frequent travels round Europe and the UK will know, drummer Set is Animal from the Muppets in human form. Cymbals crashing everywhere, frantic rolls, high octane beats throughout. The drums as instrument not just rhythm.  Meanwhile Bobs plays his guitar through an effects pedal and two amplifiers so he can replace the missing bass…and shouts himself hoarse. But that is not what you get with the opening track The Seeker. It starts with a flute and is slower than Active Minds’ usual output, sounding more like a celtic punk anthem than what we have come to expect from the Scarborough thrashers.  The lyrics could be argued to be in the style of of apocalyptic celtic legends, given that they concern a vision of the future.  However, it is not mysticism but observation through the lyrical vehicle of clairvoyancy – we are a nation of sheep being herded while injustice, greed and suffering surround us. The use of keyboard towards the close of this nearly 7 minute long epic adds to the atmosphere the song generates.

Next up is a nice slab of melodic hardcore with gruff but tuneful vocals that has hints of Leatherface, HDQ and sounds somewhat Scandinavian.  Not the D-beat that springs to mind when you mention Norway or Sweden but 80s bands like So Much Hate or Strebers.  This time is it celebrity culture in the firing line.  Part of the overall theme of the album being the things that keep people from focusing on what really matters, this obsession is part of the problem.  If Marx was writing now it wouldn’t be religion he’d cite as the opium of the masses, would it?  As Active Minds point out “Why should I give a fuck about celebrity? Why should I give a fuck about royalty? Do you think they give a fuck about you or me? They mean nothing to me and my life.”  The next few songs find us back on familiar Active Minds territory – short sharp abrasive thrash.  Climate Sceptics has a definite nod to Discharge (or perhaps Doom) whether intentional or not. Next up, Over To You, Genius has clearer vocals and tackles negative armchair critics – who it has to be said have proliferated with the advent of social media.  “Triumph of the Till” is a tirade against the current economics-above-everything epoch.

Drawing the first side to a close Swimming Against The Tide is somewhat melancholy and seems to be the dark night of the soul that affects us all when we are battling against economic and political systems.  The lads urge us not to give up. And when we flip over to side B they give us a cheerful mid-paced singalong wooah-woah-woah tune Wouldn’t It Be Better To Just Ignore These Fools?, which takes its cue from the current crop of European anti-fascist Oi bands like Los Fastidios – at least to these ears.

Corporate Dream is another thrasher.  Classic Active Minds that could have been from their mid 80s output with a touch of Electro Hippies.  As with Side A they then deliver a couple of Discharge inspired numbers in quick succession.  Side by Side has all 14 words done and dusted in 20 seconds.  “This Midas Touch” doesn’t quite touch a minute.  I Don’t Want To Follow You On Twitter is another song with a title that hides nothing.  A mid-paced gnarly number with a nice melody delivered through the gruff vocal.  They ask a good question: Who exactly are the 100,000 people who follow Kellogg’s on Twitter?  If it wasn’t so absurd it would be funny. No Need To Mourn The Death Of The Empire is 40 seconds of Heresy/Electro Hippies style thrash with Mahler’s death march worked into it.  Clever stuff, chaps!

How Much Did Your Face Cost? could be almost be a joke if it were just about vacuous celebrities and their trout pouts or Bo Selecta style enhancements. However, the write up reveals some depressing statistics about the very young age at which young women especially are considering plastic surgery.  Active Minds recognise that the tabloid media who perpetuate the images are ultimately responsible, but we willingly accept their bile.  It’s Not Rocket Science questions excessive consumerism and the waste and  destruction that it causes – all in the pursuit of money.  And The True Theory of Relativity closes the record in a similar way that The Seeker opens it, by painting a picture.  The man who questions the system and seeks alternatives ends up in a padded cell.  Meanwhile “…people are starving, and food is rotting behind locked doors. ‘Insanity’ is relative to what’s perceived as the norm. If our ‘leaders’ are the lunatics, how do we convince them they’re wrong? Power lies in the hands of industrialists and politicians. The system’s run on the basis of theft and corruption. Yet the prisons are full of people doing time for protesting against injustice or for non-payment of fines.”

This album is a pointed musical manifesto against our current excessive, constant-growth-fuelled destructive economic system and the way in which social media and other influences on behaviour are facilitating that.  Given that they use social media channels themselves, they aren’t throwing the baby out with the bathwater but delivering a salient warning to maintain your ability to question what we are fed.  The album is also a fine offering of hard core punk incorporating a range of styles.  Wise up.  Think. Act. As Active Minds say when they have their last word: “They’ve got away with murder right from the start, so now it’s time to confront them and tear their society apart.”

You can get physical copies of the LP direct from Looney Tunes, download it from bandcamp and find out the about band’s latest appearances via Facebook.