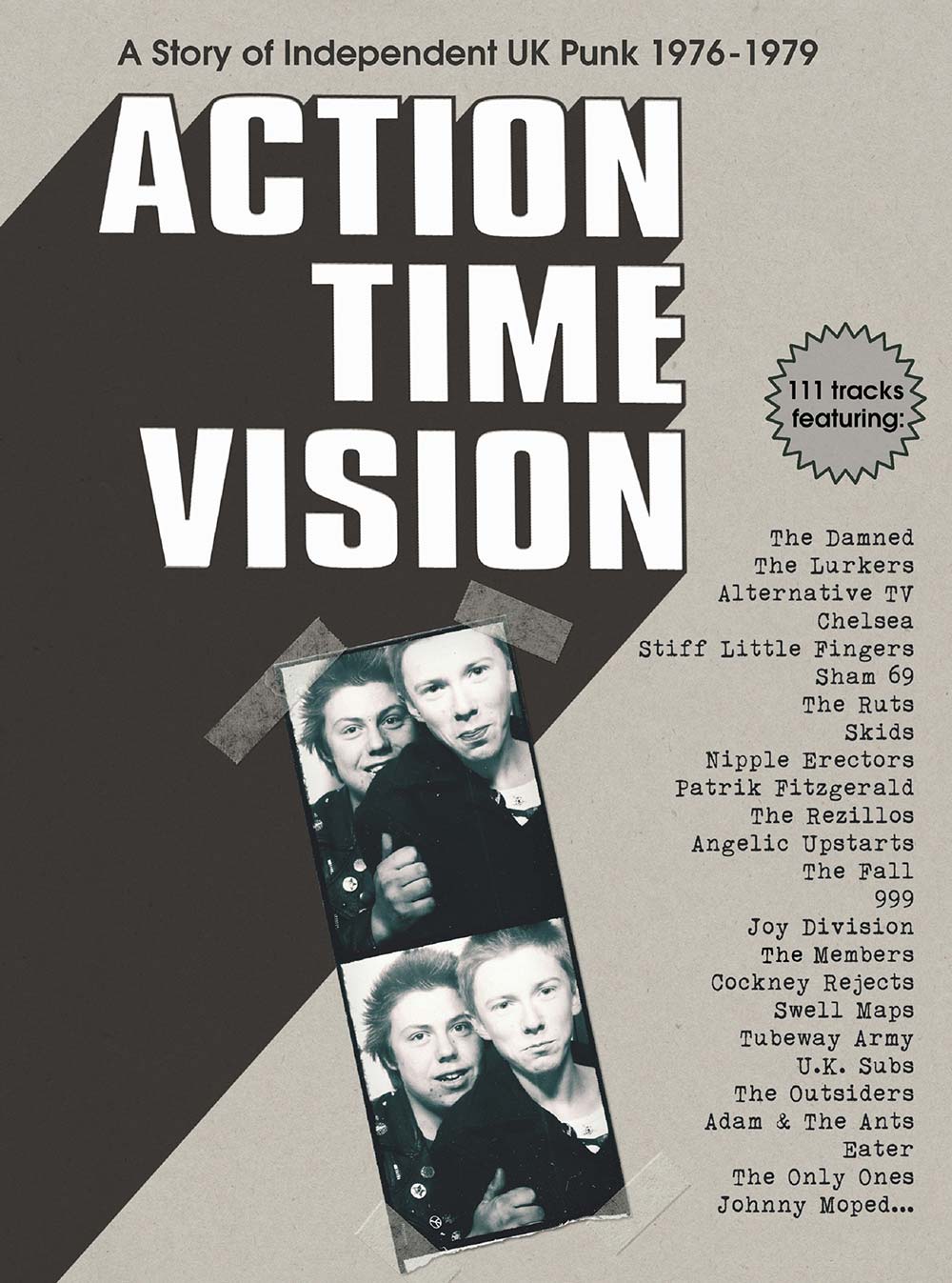 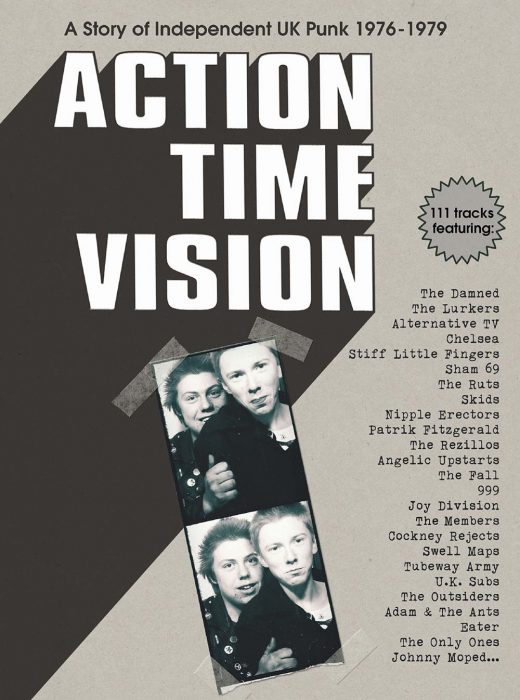 The very best (and a few of the very worst) Independent UK Punk singles & tracks beautifully compiled. 111 tracks from future heroes and absolute zeroes, but still, arguably the ‘best punk comp ever’. Dissected by Ged Babey

Well, you’ll get none of that here.

No Pistols, Clash, Jam, Generation X, Wire or Undertones either. Nothing released by a (Boo! Hiss!) Major Label at all.

Which regrettably means you get no Siouxsie & the Banshees, X-Ray Spex, Slits, Penetration,  None of the female artists from the first wave of punk are included, which makes it a bit of a boys-only affair. (OK, Disc 4 does include Vice Squad, ‘Fatal’ Microbes and the indomitable Vi Subversa’s Poison Girls but it doesn’t make up for the glaring omission of the Raincoats ‘Fairy-tale In The Supermarket’ or indeed the Sick Things ‘Street Kids’- a Raw Records classic. Every other punk band from the label is included! )

While I am moaning, the absense of anything from Buzzcocks Spiral Scratch – the first, truly independent punk release with no kind of music business know-how – makes the collection  ‘A History’ rather than ‘The History’.  Also missing in action; Subway Sect, Desperate Bicycles and the Mekons – a real shame as they would have made it abso-fuckin-lutely definitive.

Despite this it’s still a brilliant, indispensable collection. Essential for any fan of ‘punk’ full stop – but a total joy for anorak punk-collectors who can play these CDs instead of their precious vinyl.

Action Time Vision does raise a few questions though;  Is it trying to prove that Independent punk was somehow ‘better’ or more ‘real’ than punk released on a major label?  ( It wasn’t)

Weren’t around a quarter of the bands featured here just ‘band-wagon-jumpers, fakes, piss-takers’  and using the titles of two of the songs therein, ‘Worthless Trash’ and ‘Totally Useless’?  (They were.)

Isn’t it time we closed the coffin lid on punk (77 Variety) and looked to the future and at currrent variants, if indeed there is one where music, socio-political ideas and this kind of excitement collide?   (Yeah.  – these are my personal answers – disagree in the ‘Comments’…)

Punk: London and its 40th Aniversery shit riled Joe Corre enough to make his grand gesture  – which infuriated far more people than applauded it – but brought the whole discussion about Punk back to Pistols/London/1976…. which was just the starting gun.  How it spread, changed, mutated and diversified is more interesting.  How the second and third generations believed in Punk as an way of affecting change much more than the First generation….

Anyway, this is the original-period ‘real stuff’ 1976-79 style, warts and all (remastered), Punk from the Provinces and every corner of the UK.  A musical revolution or glorious amateurishness? Back to Basics Rock’n’Roll or affected, posturing poseurs and dilletantes?  I’d say all of the above, with knobs on, and in a good way, mostly.

As someone who has been labelled a ‘punk throwback’ and punk evangelist in the past this is my Year Zero on 4 discs in a box. These are the 111 Commandments I discovered on the road to Damascus (yeah we get the picture…get on with it) …. but all these decades on, it feels… strange hearing all these songs in a block. It was all such a long time ago…. so it’s a bit like watching a classic old black and white movie, or a stilted old sitcom from the 70’s …. the music is great, don’t get me wrong, full of energy and bile and humour and youth… but it’s what has happened since, and how little has changed which somehow hits home…. the emotional response.

But to younger, first-time listeners, it must sound…. I dunno really… (Get back on-task Ged.)

Statistically there are 13 or so ‘shit’ songs by ‘naff’ bands out of the 111, which I wouldnt’ve included, but more than made up for by some landmark, game-changing songs on here.  New Rose, Action Time Vision, Suspect Device, In A Rut, King of Kings and Zerox are all immense, inspirational and will never sound anything but bloody brilliant.

There are over 60, what I would call Pure Punk Exemplars of the genre (77-79) – Eater,  the Cortinas, the Users, Menace, the Killjoys…..  naive, noisy, short sharp missives from teenage tearaways telling it how they saw it….. Funnily enough the ones which are the most enjoyable now are the ones that the Music Press at the time despised; Raped, the Snivelling Shits and the Unwanted.  Shock-horror merchants, stoned-journalists and rank amateurs made an inspirational racket that is so full of fuck-you joie de-vivre that it leaps out of the speakers and dares you to hate ’em.  Eater, Killjoys, Wasps, Art Attacks all sound like nothing since with their mannered vocals and sped-up glam-rock stylings.

Ten others have been chosen because they are made by Future Stars or Cult Heroes.  Simple Minds, Gary Numan, Joy Division, the Fall and so on. None of whom actually seem up to the standard set by the less-carreerist. Maybe this is hindsight, but possibly not.

There are a few selections which are Out of Place; the Only Ones were not at a ‘punk band’, the Hollywood Brats pre-dated it all by quite a few years and Pure Hell were from the States ( OK, their single was only released in the UK).

The number of bands Still Going Today ( in one form or other) is staggering –  by my reckoning Forty Three of the buggers! From stalwarts like UK Subs, 999, the Adicts – to the odd recent reformation, the Dole, Xtraverts and including people like Shane McGowan and Kevin Rowland. Who would have imagined that from a style of music which was the voice of ‘Youth’ – supposedly, that they would endure and survive into their late 50’s?

There are some good parodies and piss-takes; Alberto Y Los Trios Paranoias ‘Gobbing On Life’ is brilliant, both as a parody and a punk classic, as is O’Level’s contribution ‘Psuedo Punk’ (a better song than the often-heard Part Time Punks sister-disc). The fact  that its sequenced before the Members track is surely no coincidence!

The joy of this collection though I have to admit is the fact that a couple of obscure classics which I’d never heard before are on here; Big G’s ‘I Hate the Whole Human Race’ is like a garage version of the Stooges from Newcastle and is an absolute belter.

Bazoomis ‘Give It All To Me’ too is a stream of consciousness ramalama classic.

The prize for worst punk band name ever and worst, totally cliched song-title ever, goes to The Dole with ‘New Wave Love’ but the song is wonderful; a tale of teenage sex whilst the parents are out- with beautiful Stranglers-y organ and corny lyrics, but a total classic.

It is funny too, how contributions by Sham 69, Chelsea, 999 and Menace, bands who have toured a lot and still do currently and are growing old, disgracefully, but visibly with us, sound oh-so fucking great, in the context of this boxed set.  Its as if I’d forgotten they were young, thin and had hair once and were every bit as good as their supposed major label, deified contemporaries.

The discs are ordered roughly chronologically so Disc One opens with New Rose (what else!) followed by Eater – Outside View, so by Disc 4  we are in late 78 and into 1979. Consequently the diversification starts;  Cockney Rejects mighty ‘Flares and Slippers’ sign-posts Oi! The Ants, the Pack and the Prefects herald different shades of Post-Punk,  The Newtown Neurotics start the banner-waving Leftist tendency and the Brighton ‘Vaultage bands like Woody & the Splinters signal C86 shambling tweeness to some extent. The Licks (Epileptics) become Flux and join Poison Girls in the Anarcho-Punk loosly-affiliated collective.  And as for The Stoat – they were always Weller-loving Mods!

There was a lot of variety within ‘Punk’ in the years 76-79 – from the po-faced seriousness of the Outsiders, the Panik, Joy Division to the juvenile delinquency of Puncture, the Jerks and Demon Preacher.  One of my favourite moments on the whole set is the intro to ‘Little Miss Perfect’ where the latterday Nik ( from Alien Sex Fiend) urges Joyce McKinney to put her knickers on because (in a voice part Kenneth Williams, part Johnny Rotten)  ” I can see your bum”. Carry On Punk Rock!

The Disco Zombies ‘Drums Over London’ was a song I hadn’t heard for a long, long time.  A classic single which, like a lot of these, Peel played a lot. I never knew about the ‘controversy’ it caused. To me it was blatantly obvious that it mocked the racists  from whose viewpoint the song is narrated.

Breaking down the subject matter in the songs (in a non-scientific way – on the bus with pen paper and I-pod) I came up with some surprising results;

49% of the songs are about Teenage Angst, Rebellious Youth and Alienation.  10%  Socio-Political concerns or ‘protest’.  19%  are about Love & Sex & ‘Girls’.  7%  concern ‘the Future’ with a Sci-Fi or surrealism angle. 12% are just meaningless bollocks or ‘silly’. 3% are about ‘madness’.  Stick that in your sociological essay and smoke it.

As a historical documentation, Action Time Vision works as it doesn’t whitewash things by excluding the less-worthy. Including the early, Non-Nazi Skrewdriver might have been an idea as Chiswick was an Independent label, but would have caused the age-old heated debate about the decision. Why Stiff single One Chord Wonders isn’t included is a mystery.

If you bought the 1234 Punk & New Wave Boxed Set that Universal brought out in 1999 then this is the perfect companion set and the best compilation of punk rock since. (They only duplicate 16 songs out of 100 / 111). But beware, if you are old enough to have heard these songs first time around you will quite possibly drown in flood of nostalgia -with cranked-up electric guitar.

I’ve punktuated this piece with seven of my particular current favorites from the box. which are perhaps the most obscure, but defiantly, the Most Punk Rock. ( You all know what New Rose, Suspect Device and GLC sound like dontcha punx?)  Enjoy whilst you are waiting for Santa to bring you the Boxed set.