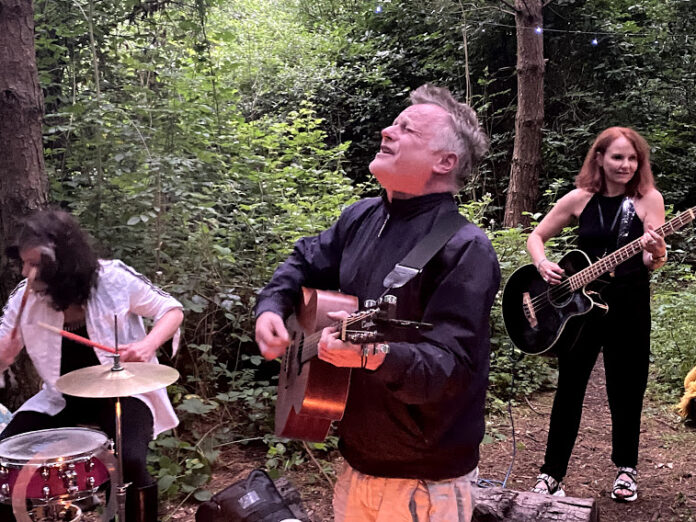 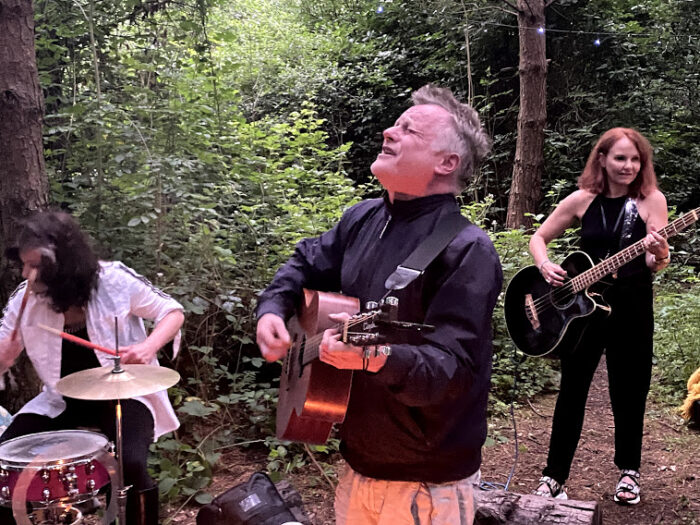 Acoustic Pines is the brainchild of Chris Bridgett and his fellow DIY bandits who have come up with a plan to fuck the rules and go bandit with a secret gig in the woods in Levenshulme. I decided to take a road trip to witness a special night that brought together a bunch of beautiful people gagging for some live music that Boris and his Eton mates are intent on destroying. Think again you goons. Wayne AF Carey has it covered…

If you go down in the woods today you’re in for a big surprise… If you can fuckin’ find it! Me and my gigging buddy slaphead mate who used to have hair decked on the train from Stockport to Levy on a mission to see some live music for the first time in a year. In the woods? In Levenshulme? Fuck off you might say until you take the 15 minute trek to Highfield Country Park which is hidden at the back of a sprawling multicultural estate. It was like walking into another world after trekking up the track to a miniature scene of Delamere Forest (I have flashbacks of getting lost after nights of debauchery…) and then your trusty recommended What3words app gets lost! Luckily we bumped into a bloke dressed like he was definitely not going for a leisurely stroll, in a similar position. Where the fuck do we go now? A pause… Then as if by magic another bloke pops his head from behind a tree with a lanyard on? Levy Woods security? Dogger? Nah! Just some friendly guy guide saying ‘up here mate!’ We get there and the friendly face of Cold Water Swimmers frontman greets us with a smile, as does the shy James Holt, both warming up for the magic of this event. “Have you seen a missing drummer and bass player on your way lads?” We haven’t. The beer is opened and the people start arriving slowly for this unique well planned event. Fairy lights adorn the trees, a safe as fuck campfire (which I fall into at one point) and a snazzy little set up is unfolding. 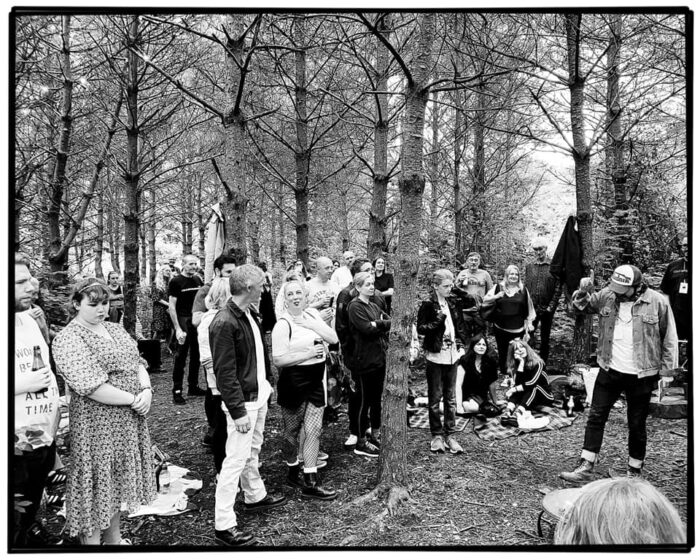 Meet the line up: James Holt, George Borowski, Leon The Pig Farmer, Jon Coley and of course Cold Water Swimmers. In no particular order they make up a sound unit.

It’s not like any gig I’ve been to. But then again the world is not normal so we need events like this to keep things burning brightly. One of the friendliest crowds I’ve ever met at a gig ever. Chris has this ‘No Dickheads’ policy in place so I’m wondering how I got in! I could cry at the familiar faces I see from the ghosts of gigs past and it’s reassuring that things are looking sort of normal. I’ll name some people who were here that are always buzzing around gigs just to give you a vibe of the beautiful people: Steve Hampson, Sal Thompson, Keith Higgins, Aziz Ibrahim, Owen Meikle Williams, Angela Moores, Jo Lowes, Carl Maloney (apparently), James Holt’s mum and the acts themselves. 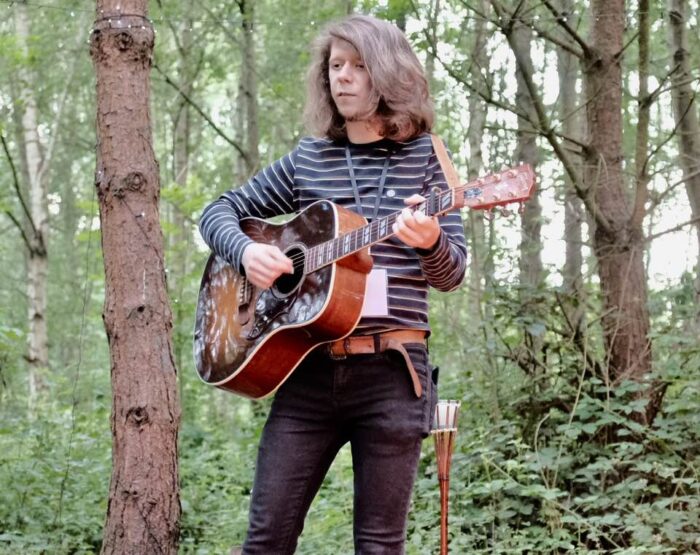 It’s a mixed bag with CWS doing an early set from their excellent debut album which goes down well as an acoustic treat, starting with the excellent Breaking Hearts and the Motorhead / Johnny Cash influenced Love Is Insane. Unlike normal gigs, the Swimmers start first with a few songs to warm up. James Holt just oozes with talent. He does a few of his incredible songs with heart and soul as he’s always done. I last saw him at a sold out Deaf Institute gig and he just ticks all the boxes of solo talent commanding a great backing band that compliment his unique genius. Johnny Bramwell watch your back. Steohen Fretwell get your guard up and your gumshield in for your comeback fight. James is after that gold medal without even trying. Before he launches into Come Out To Play he tells the young kids in the audience a childrens story before cracking out the brilliance of one of his best numbers. The solo voice of the future generation without being a boring twat like a few ‘up their arse’ major label names I could mention but I can’t be fucked. 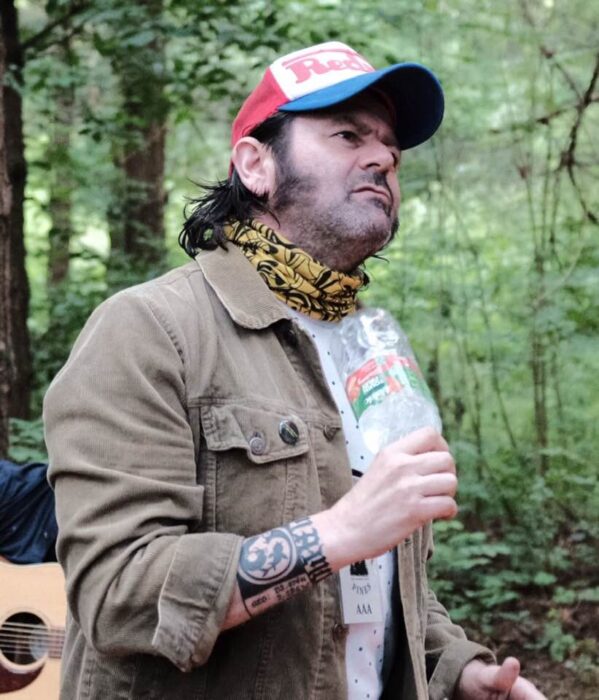 Leon The Pig Farmer… Where do I start with this guy? A cracking bloke with charm and wit that tells you tales at a hundred mile an hour pace with no prompts. It’s all up there and flows like nothing else. He refrains from swearing as much as possible and when he does he apologises to a seven year old girl who’s entranced by what is going down. Highlight for me is his funny as fuck tales of Manchester and people taking ecstacy, drunken bums, signature characters with witty Manc nicknames. He has everyone in his pocket. There are a few good poets out there going for the John Cooper Clarke crown. He’s fuckin’ nicked it already. 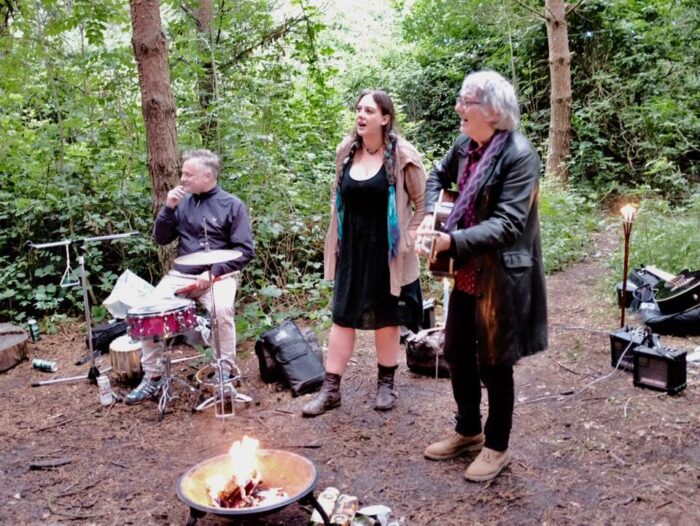 The Swimmers dip in and out with mini sets covering the album and it’s a delight hearing them in a raw form. Going home and listening to the album after this is likened to a skeleton growing muscles, skin, blood vessels and sinews to form a full bodied band. The weather is bang on, the midgies are at bay and we all love the vibe. George Borowski does a small set which goes down amazingly. This guy was under my radar but I knew there was something about him. He’ll hate me for mentioning this yet “Guitar George, he knows all the chords” Anyone? Yep, that’s actually him. He’s also been in Sad Cafe and Meatloaf for fucks sake! He does a blinding Bring Me Fire which in this setting sounds absolutely stunning with the backing vocals on fire. He does some shit with that guitar that fucks with my mind. 70 odd years old and looking like a rockstar to this day. 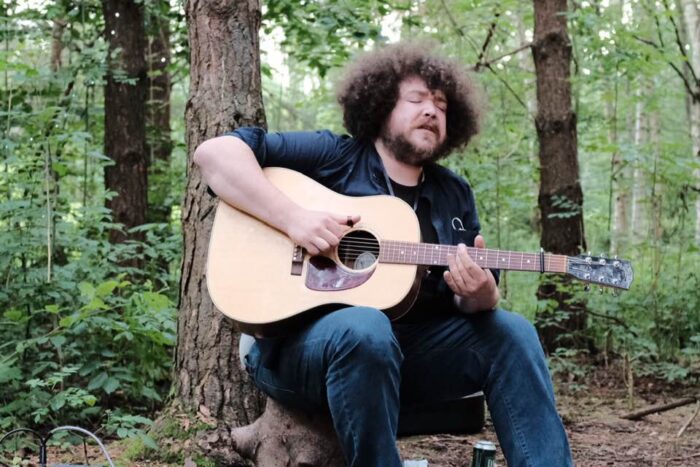 Surprise introduction for me tonight is the pure blinding talent of Jon Coley. I’ve seen some talent over the years but this guy is amazing. I stayed until the end when it was pitch black and Jon just jammed with Chris Bridgett for aged while the fire burned it’s last embers. It was mesmerising listening to how good this guy is. Think a male version of Brittany Howard from Alabama Shakes. Stunning stuff I could have listened to all night. The problem is at this time I was walking the wobbly walk of Stella and had to get home. At least I was almost the last man standing! A memorable gig for the memory banks which will not be repeated in a hurry. Intimate, solid and professionally done by the brilliant Cold Water Swimmers and Chris Bridgett.

Photo Credits: Sal Thompson and Steve Hampson and me!