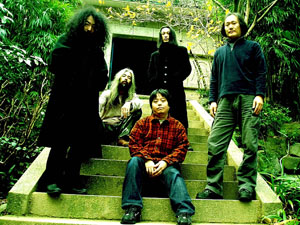 Acid Mothers Temple & the Melting Paraiso U.F.O is one of many groupings that these highly talented musicians are a part of. Formed by guitarist, Kawabata Makoto in the mid nineties, with the intention of creating, extreme trip music. The cult status of this band is evident as the pack out room is full of heads, all excited by the expectation of, what can only be described as a sonic supernova.

The five piece are on excellent form tonight as they enter into their psychedelic mind space with incredible definition and groove. Within the free form nature of their style, the space rock/stoner riffs come thick and fast, forming the foundation with which they step off and take flight in to the stratospheric cosmos. Even when they hit their nosiest crescendos, like the epic, Chinese Flying Saucer from their 2011 release, The Ripper At The Heavens Gates Of Dark, the Mothers riff assault is like Led Zeppelin meets Pink Floyd. Bassist and vocalist, Tsuyama Atsushi screams and growls as if possessed by the spirit of an animal, bringing smiles and some looks of disbelief from the attentive audience.

The hour and a half set brought forth classics such as, Pink Lady Lemonade and OM Riff, lifting the energy to exceptional heights through their stellar playing. Higashi Hiroshi on the synthesizer adds all the necessary frequency modulation and we are given a master class in groove and flow from drummer, Shimura Koji. With most songs breaking the ten minute mark, minds were melted … but in a good way.

They are a truly inspiring band to witness live covering a wide range of dynamic and sonic possibilities. The performance exuded the dedication and spiritual passion that they quiet obviously live by, and by the end of the set, it seemed as if they touched the souls of all present. I for one, left the venue higher and more enlightened than I entered. Acid Mothers Temple & the Melting Paraiso U.F.O are an experience. Take a trip with them! You won’t be disappointed.