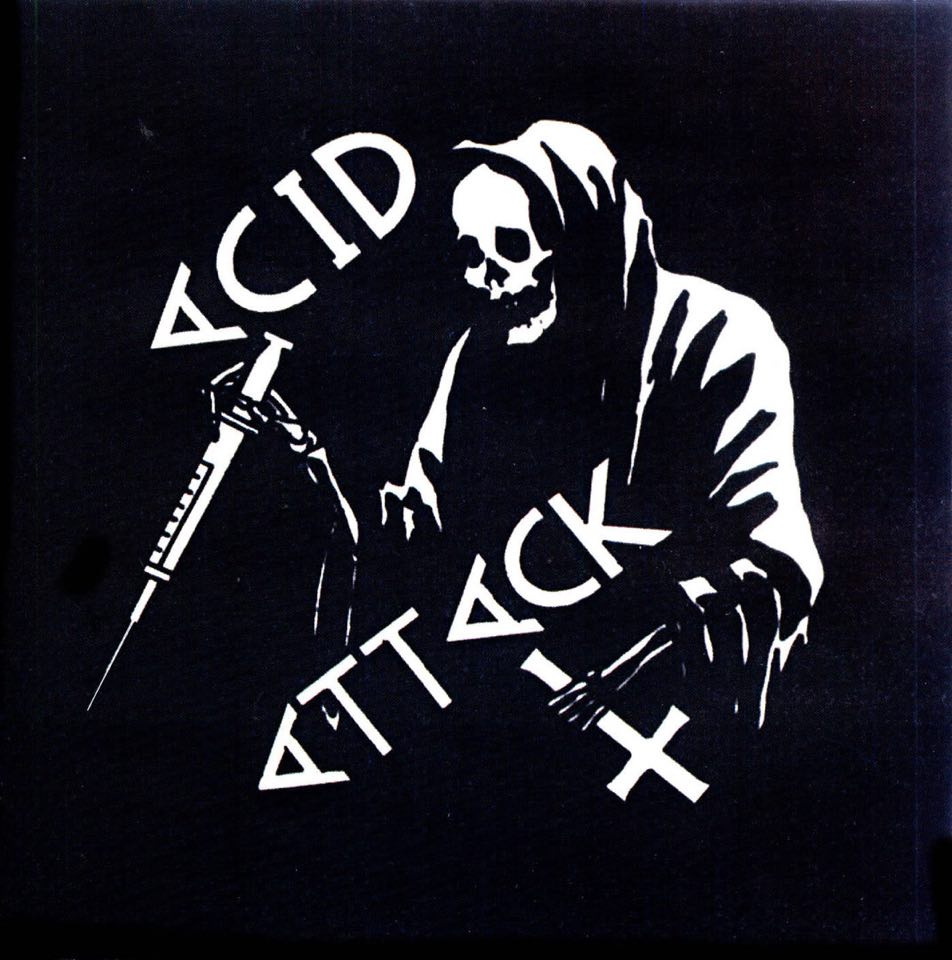 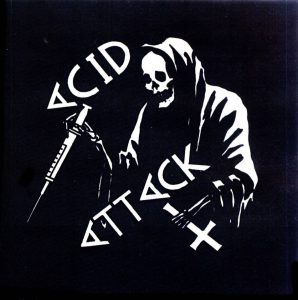 (Only Fit For The Bin/Detour Records)

Archive collection of UK82 punk bands complete works. One of a generation of forgotten, earnest ‘Bullshit Detector’ bands who also served. Ged Babey salutes them and their kind.

Acid Attack? (Try Rennies..)  Formed late 1980 / split in ’84. From Portsmouth, they released the 13 track cassette album “Sulphuric” and contributed the track “Suburbia’s Dream” to the Sane Records 1984 compilation LP “On the Street”.

Somehow they didn’t fit neatly in any particular genre from the time; Oi!  ‘hardcore’ or ‘anarcho-punk’ and the retrospective classification of ‘UK82’ only fits timeline wise, as they weren’t as fast as Discharge and weren’t clueless ‘chaos-punks’ like the Exploited.

I have to be honest though; this is one for collectors and real obscure-punk enthusiasts only, and of course their fans of old who saw the band back in the early 80’s.  The clues are there in the press release;

Acid Attack epitomise the DIY ethic of UK punk rock! …the sound of enthusiastic young punks getting to grips with their instruments and developing their sound.  …a short but favourable review in the music paper Sounds, who noted that “Acid Attack are a spirited punk band with sufficient ideas and energy to lift them above the morass of thrash-and-screech merchants”.

That said, various reissue labels in Italy and the States were bidding to release this, before the Detour Records subsidiary came up with the best deal.  And the band have a ‘following in South America’ too I’m told.

I’m definitely up for this CD. I remember seeing them at the Cumberland in Portsmouth …. aggressive, and totally ‘in your face ‘ music, and with Jacko, a great front man, spikey hair and leathers, the large crowd that night, really enjoyed a night of punk passion!  It will be good to hear these songs again, and take me back to my youth…

Musically, Acid Attack were self-taught beginners and the old ‘drums quite good, the bass is too loud..’ applies. The drummer goes for a bit of a ‘tribal’ feel using the toms as much as possible and the basslines are vaguely gothic and Crisis-like.  The guitarist was not-great and struggled to squeeze out a ‘solo’ -giving it the rough-appeal of Shelley on Spiral Scratch.  The vocalists main influence seemed to be Stinky Turner.

As always with releases like this, its fun to play spot the influences.   Early Vice Squads guitar sound is favoured and a bass-line from the Adverts ‘No Time To Be 21’ is shamelessly stolen and slotted into ‘Who Do They Think They Are?’.  The intro’s to Conflicts ‘From Protest To Resistance’ and a later-era Outcasts intro are re-sprayed and the number-plates changed on a couple of others.

The topics covered in the songs; nuclear war/power, the monarchy, the system and so on are very much in the Anarcho punk traditions of Crass, Conflict and Subhumans and very of the time  (Where are the equivalents in 2016 though? )  It is as if a check-list is being ticked off : Church, State, Law, Monarchy, Police… perenial hate-figure Thatcher makes an appearance needless to say. ‘Tyrant’ is nicely rhymed with ‘remain silent’.

I’m always reminded of a song by one of Acid Attacks contemporaries from Southampton; Suicide Pact who had a song called ‘Song About Nothing’, which was basically a list of things the song wasn’t about; Vivisection, War, Police brutality etc, so in essence the message was; – songs MUST be about SOMETHING to be worthwhile, or else there’s no point at all.

Its a trap that many of the ‘Anti’ punk bands fell into, thus defining them as ‘preaching to the converted’ by critics outside the scene. This orthodoxy resulted in the further splintering of punk-genres ; the thrash of the Hardcore Holocaust bands, skate punks like the Stupids and fraggle-punk of Mega City 4.

Acid Attack who weren’t one of the 100 bands  included on Overground Records series of anarcho compilations (Anti War, Anti-State Anti-Society and Anti-Capitalism ) were an archetypical provincial punk band inspired by Crass but with a few other influences in the mix.  They did their bit in the war against the cultural juggernaut which was the 80’s- and all it came to stand for.

The songs about punk life ( Who Do They Think They Are?) provincial boredom (Nothing Doing) and depression (Alone Inside) are the ones that stand the test of time and are good examples of the naive snarl of young punks expressing themselves.

Where are they now? Well, one of them works at a PRU (Pupil Referral Unit) proving that being in a punk band is good training for a tough job and that punks give something back to society.

The album is a time capsule and an enjoyable trip back to what are probably going to be regarded as the Good Old Days in the near future, but as I said one for old fans and punk collectors, who will absolutely love this beautifully put-together reissue.

CD comes with an eight page booklet plus a reissue of their first badge, a sticker and A4 booklet with photos, posters and complete lyrics