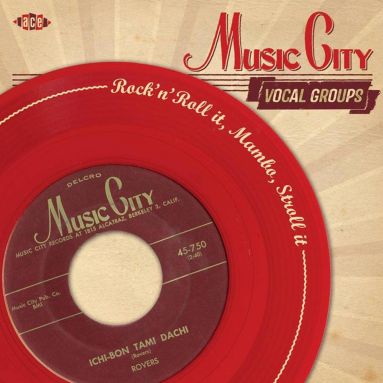 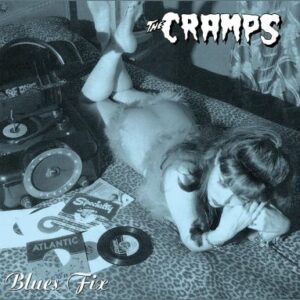 A very welcome addition to Ace’s ever expending catalogue of vinyl releases is the issue of Blues Fix, a ‘lost’ classic Cramps EP from 1992. Originally only released on CD as an adjunct to The Cramp’s 1991 Ace masterwork album, Look Mom No Head!, and featuring Jim ‘Bad Seed/Grinderman’ Sclavunos on drums replacing the recently departed Nick Knox, this long deleted disc is now reissued in style – as a 10 inch record.

From the fabulous cover portrait of guitarist Poison Ivy Rorschach through to its final run-out grooves, Blues Fix is 100 per cent prime Cramps. As the title implies, Blues Fix allowed the band to focus upon another key musical genre that inspired them and produce a slower musical work than usual, creating four cover versions brimming with menace, wit, licentiousness and stylist invention. The Cramps’ bold take on the 1978 Captain Beefheart track, ‘Hard Workin’ Man’, written by Jack Nitzsche for Paul Schrader’s memorable debut film as a director, Blue Collar, is first up. Beefheart’s version is unforgettable and uses a jackhammer for the rhythm section, but The Cramps’ reading, first featured on Look Mom No Head!, sporting a far more sinister vocal delivery from the late, great Lux Interior, teases out new possibilities in an exceptional song.

The next three numbers were never available upon any previous release. The Cramps’ measured, bawdy take on Lightning Slim’s 1957 Excello single ‘It’s Mighty Crazy’ leaves nothing to the imagination (“it’s mighty crazy to keep on rubbing at the same old thing”) and features a slinky guitar solo from Ivy, while their lascivious version of Walter Brown’s rockin’ Texan 1958 Zip single ‘Jelly Roll Rock’ also makes its meaning crystal clear.

Fittingly, this glorious EP closes with The Cramps feisty rendition of one of the greatest nonsensical singles ever recorded – Sheriff & The Ravels’ near intelligible, 1958 vocal group masterpiece, ‘Shombalor’. Needless to say, Lux Interior (we shall never see his like again) makes the most of the absurd lyrics that seem to paint a fractured picture of an absurd tropical island nirvana and the provisions and creatures to be found upon it. No other group than The Cramps could ever do ‘Shombalor’ justice, but The Cramps were never just another band.

Blues Fix is a lasting testament to The Cramps’ all-embracing rock ‘n’ roll vision and Jim Sclavunos’ unfortunately brief but highly artistically successful period within the combo. Together with Smell Of Female, Blues Fix could be the best Cramps record Ace ever released. 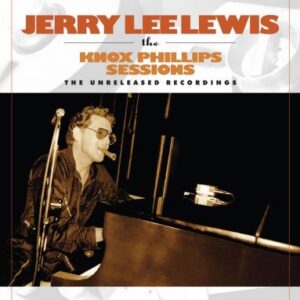 Raw and uninhibited, produced by Sam Phillips’ son, Knox, within the hallowed portals of Phillips Recording, 636 Madison Avenue, Memphis (taped at some unspecified date during the late 1970s, these are astonishing recordings of Jerry ‘The Killer’ Lee Lewis at the height of his demonic powers. Phillips Recording was opened by Sam in 1960, just a few blocks up from his original Sun Studios, where he recorded Lewis’ epochal rock ‘n’ roll classics ‘Whole Lotta Shakin’ Goin’ On’ and ‘Great Balls Of Fire’.

Lewis had enjoyed a highly successful commercial and artistic period with Mercury records through the 60s into the 70s, after having left Sun, but only Knox Phillips, or his father, could have such a strong, empathetic working rapport with the mercurial Killer.

Perhaps most importantly, Knox Phillips in these sessions moves Jerry Lee Lewis’ “Pumping Piano” back to the front and centre for these historic recordings, realising there had been a tendency during the Mercury years for this vital instrument to become somewhat lost in the lush production work.

The CD (which features notes by Colin Escott, author of a magnificent Hank Williams biography) opens with The Killer’s full-on assault upon Jim Croce’s ‘Bad, Bad Leroy Brown’. Previously a hit for Sinatra, Jerry Lee drags the song from its Chicago setting on to the mean streets of Memphis and really beats the hell out of it in his exhilarating, inimitable style.

During the number Lewis appears to become increasingly possessed, bringing disgraced American President Richard Milhous Nixon into the violent scenario, throwing in lines from Hank Williams’ song (recorded under the moniker of Luck The Drifter) ‘I’ve Been Down That Road Before’, then alternately proclaiming that he’s “the baddest mother-humper in Memphis, Tennessee” and then recanting that statement, pleading that he’s “not bad.” In ‘Bad, Bad Leroy Brown’ the indefatigable boogie-woogie countryman evinces an astonishing magnum opus performance, but this is only the beginning. Lewis, the consummate stylist of post war popular music, proceeds to cover songs, written over a period spanning a hundred years or so, from every conceivable American musical style – his way.

From vaudeville through pop, rock ‘n’ roll, Cajun, gospel and blues, The Killer masters them all. At the close of his remarkable medley of Teresa Brewer’s 1950 neo-vaudevillian hit ‘Music! Music! Music!’ and Eddie Heywood and Hugo Winterhalter’s jaunty 1956 instrumental ‘Canadian Sunset’, Lewis proclaims, “I think I’ll do a classical number”. After what we have just heard, this does not seem a preposterous suggestion.

If you only buy one CD this month, hell, make that this year – it should be The Knox Phillips Sessions The Unreleased Recordings. This is a recording for the ages. As Jerry Lee Lewis would say, “Think about it.” 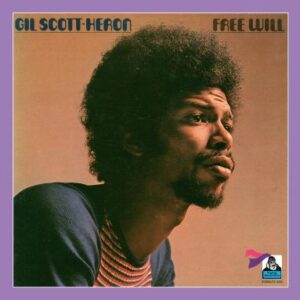 The late, great Gil-Scott Heron (1949-2011) was one of the most incisive, sophisticated, intelligent and passionate commentators upon the Afro-American experience of the late 20th century. The singer/poet produced some of the most vital material ever created in black US music. Heron’s songs and words encompassed the personal and the political, not in a crude, didactic fashion, but as truly poetic and witty satirical observations upon the numerous indignities, inequality, oppression, blind prejudice and naked violence that he and millions of other African Americans had to endure.

Heron first came into view in 1970 as the young author of a novel, The Vulture, and of poetry entitled Small Talk at 125th and Lenox. Through a publishing contact he got in touch with Bob Thiele, the visionary former head of the jazz label Impulse, which had recorded many of the great John Coltrane albums that Heron admired.

Ace continue their highly commendable reissue programme of work Gil Scott-Heron (together with his musician partner, Brian Jackson and a bevy of top musicians) recorded for Bob Thiele’s Flying Dutchman label with the release on CD and vinyl of Heron’s 1972 album, Free Will. The equal of his previous 1971 Flying Dutchman LP, Pieces Of A Man, Free Will was Heron’s last album for Thiele.

The title track is an urgent, funky, syncopated repeat phrase song, chastising those who were entangled in deep personal spiritual enlightenment, whist ignoring the need to instigate change in the outside world. The slow, affecting ‘Speed Kills’ and ‘The Middle Of the Day’ warns of the perils of losing track of your own existence. The strident ‘The Get Out Of The Ghetto Blues’ urges those in the projects who think they are riding high because they are scamming welfare and shooting smack to display some pride, ‘…and then he wrote Meditations’ is a sincere salute to the redemptive musical genius of John Coltrane.

Arguably, the highlight of Free Will is ‘Did You Hear What They Said?’ Though dealing with the disproportionate numbers of Afro-American soldiers killed during the Vietnam War, Heron’s skill as a lyricist is such that the pathos of ‘Did You Hear What They Said?’ transcends the confines that particular conflict to achieve a powerful and timeless universal condemnation of warfare. The line in which the grieving mother’s agony is amplified as “someone told you he couldn’t be buried” is heartbreaking. 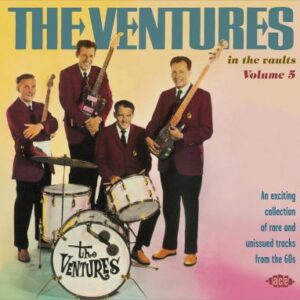 The Ventures – In The Vaults Volume 5

In the pantheon of rock ‘n’ roll greats, American guitar instrumental combo The Ventures should receive more plaudits than they are currently awarded. Even though the group are acknowledged to be the most commercially successful instrumental band of all time and were inducted into the Rock & Roll Hall of Fame in 2008, marking the 50th anniversary of the group founded by the late Bob Bogle and Don Wilson, The Ventures seemed to be considered somewhat ‘unhip’. Hopefully, the fifth volume of Ace’s Ventures rarities and unissued cuts, lovingly compiled and noted by Dave Burke and Alan Taylor of the revered surf music magazine Pipeline (co-ordinated by Mick Patrick), will redress the balance of critical option.

The CD begins with a terrific live studio recording of the Richard Rogers standard ‘Slaughter On Tenth Avenue’, which in just under two minutes manages to be just as thrilling as organist Jimmy Smith’s seven minute 1964 account. The disc also includes The Ventures fine vibrato arm heavy versions of Duane Eddy and Lee Hazlewood’s ‘The Lonely One’, Leiber & Stoller’s ‘Kansas City’, Acker Bilk’s million seller ‘Stranger on The Shore’ and ‘Apache’, made well-known in the UK by The Shadows.

The best is keep for last, with a series of tracks that can be presented as evidence to back up Burke and Taylor’s claim that The Ventures were forebears to the psychedelic and heavy guitar rock of the late 60s and 1970s. The Ventures composition ‘Fuzz Factor’ would not have been out of place on The Cramps’ 1980 album Songs The Lord Taught Us, ‘Sauerkraut’ anticipates grunge, whilst their four minute live in the studio assault upon The Chantays enduring 1962 hit ‘Pipeline’, which incorporates a brief reference to The Routers famous 1962 clapping chant number ‘Let’s Go (Pony)’ equals Johnny Thunder’s 1978 version for all out rock ‘n’ roll swagger. 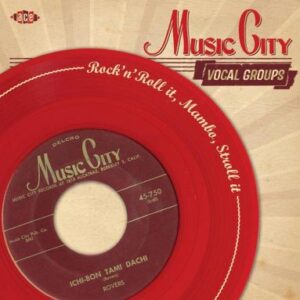 Covering a period of 25 years, from the early 1950s until the mid 1970s, black entrepreneur Dobard recorded street level rhythm & blues, doo-wop vocal groups and soul above his record shop.

Like Dobard’s other recordings, the quality is raw, rough and ready, but the vocal groups he put on tape were obviously all totally dedicated and abundantly soulful and rockin’. Label stars The 4 Deuces are well represented, with a previously unreleased version of their first-rate cover of The Drifters’ ‘Whatcha Gonna Do?’, the jumping ‘The Nest Is Warm (But The Goose Is Gone)’, a radio advertisement they sang in praise of the Italian Swiss Colony company, who produced the port the group celebrated in ‘W-P-L-J’ and another jubilant ode to intoxication, ‘Down It Went aka It Went Down Easy’. Other highlights include The Gayteens’ frankly nonsensical ‘Ding Dong’ and ‘Teenage Mambo (a cappella)’, the jubilant ‘Church Bells Will Ring’ by The Holidays, The 5 Campbells’ dancefloor filler ‘Hey Baby’, the rock ‘n’ roll energy of The Mandarins’ ‘Roll On Little Mama’ and ’The Rovers’ rosy recollection of military service in the Far East, ‘Ichi Bon Tami Dachi’. Unbelievably, when Capital Records acquired the single, the disc was advertised with a photograph of a white group in Billboard. Such was the state of race relations in America during 1955. Dobard ceased licensing his acts for many years afterwards.

Palao’s excellent notes are accompanied by interviews with Music City artists, including Luther McDaniels of The 4 Deuces, Robert Woods of The 5 Campbells and Jay Payton from The Five Rovers, making Rock ‘n’ Roll It, Mambo, Stroll It an even more essential acquisition.