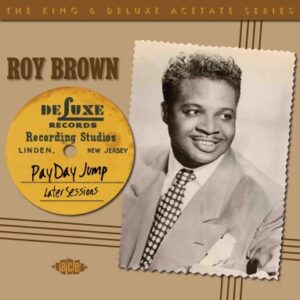 Compiled and noted by Tony Rounce, here is the belated sequel to Ace’s King & DeLuxe Acetate Series study of the most important figures in popular music, Roy Brown. Together with his contemporary 1940s R&B artist Wynonie Harris, bawling, rollicking vocalist and songwriter Roy Brown profoundly influenced both black and white artists who would finally forge what was defined as the rock ’n’ roll sound and style of the mid 1950s.

Nonetheless there is so much more to the former welterweight boxer, born in New Orleans on 10th September 1925, than the admittedly stunning, R&B juggernaut  ‘Good Rockin’ Tonight’.  Many of Brown’s finest recordings, which have never sounded better than in this Acetate Series, are included in this compilation of his Later Sessions 1948 – 1950.

Wynonie Harris’ songs were principally concerned with sex and alcohol. Roy Brown’s R&B numbers fluctuate between ecstatic celebrations of sex and crushing despondency.  ‘Cadillac Baby’ “rides a long, long time”, ‘Miss Fanny Brown’, despite being 40, has “a new kind of loving that brings you back for more”, ‘Boogie At Midnight’ is obviously a blast and ‘Pay Day Jump (Wine, Women And Song)’ is as riotous as the title implies.  Arguably, the most outrageous Brown number here is ‘Butcher Pete Part 1 & Part 2’, in which the protagonist is constantly “hacking, whacking and smacking” all the “women’s meat” in town. Unsurprising this ditty failed to chart in 1950, but The Cramps would successfully cover Brown’s ‘Butcher Pete’ on the B-side of their 2003 ‘Big Black Witchcraft Rock’ single.

Yet Brown’s 1950 hit ‘Hard Luck Blues’ is, as author Nick Toshes precisely describes it, “the most morbid Number1 hit in the history of the R&B charts.”  Brown’s ‘Dreaming Blues’, ‘Love Don’t Love Nobody’ and the apocalyptic ‘Judgement Day Blues’ give ‘Hard Luck Blues’ a run for its money too.

By the time Elvis recorded ‘Good Rockin’ Tonight’, Brown’s career was commercially in a slow decline. Unjustly ignored, Brown’s rich rock ‘n’ roll voice nevertheless endures through the decades, a trailblazer who never really received his full due (certainly not financially) before his death in 1981.

Fortunately Ace has planned another CD of Roy Brown 1951 acetates, together with tracks from his 1948 and 1949 sessions, previously unreleased demos and alternative takes.  Now that is cause for hearty celebration. 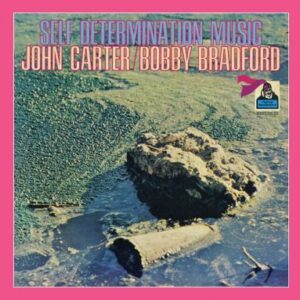 Another great ‘lost’ album, originally released in 1970 on Bob Thiele’s own Flying Dutchman label, is now released on CD for the first time, thanks to Ace/BGP. Self Determination Music high cult status with fans of challenging modern jazz is richly deserved.

Clarinettist, alto and tenor saxophonist John Carter was born in Fort Worth, where he performed with Ornette Coleman during the 1940s. In 1961 he moved to the West Coast where he formed a musical partnership with fellow Texan trumpeter, Bobby Bradford.  Bradford had also played with Ornette Coleman in Los Angeles during the 1950s, and it would be Coleman who would recommend to Thiele that he sign the duo to Flying Dutchman.

Self Determination Music was Carter and Bradford’s second album for Thiele, for which he suggested that a second bassist, Henry Franklin, join bass player Tom Williamson and drummer Bruz Freeman for the session.  The result is a range of dramatic interchange between the players on Carter’s three compositions (‘The Sunday Afternoon Jazz Blues Society’, ‘Loneliness’, ‘Encounter’) and Bobby Bradford’s piece, ‘The Eye of The Storm’.

‘The Sunday Afternoon Jazz Blues Society’ perhaps most clearly echoes both Carter and Bradford’s past experience playing with Ornette Coleman and their secure and inventive working strategies.  Bradford’s ‘The Eye of The Storm’ makes great use of Williamson and Franklin before steadily building towards an explosive crescendo.  The ominous yet bittersweet beauty of  ‘Loneliness’ highlights Carter’s sax to fine effect, in a similar fashion to the film scores of Johnny Mandel, while the album’s closing ‘Encounter’ brings the whole group together for a fittingly exploratory composition.

If you dig 60s free jazz then Self Determination Music is up there with the best albums produced in that era.

Buy Self Determination Music on CD at Ace Records. 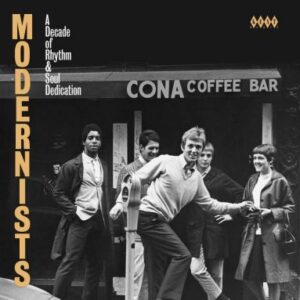 Compiled by Ady Croasdell and Dean Rudland, who also wrote the notes this excellent Modernists compilation, provides the quintessential soul and rhythm & blues soundtrack for a mod-minded individual from any era. Croasdell and Rudland, who previously compiled the highly successful and influential Ace Mod Jazz discs, now turn their attention to 24 rare but hot tracks that would have definitely excited the first wave of UK Modernists in the late 1950s and 1960s, if they had been able to hear them.

“Don’t listen to anyone who says if it wasn’t a hit at the time it wasn’t good enough,” writes Croasdell in the introduction. “That’s not how the indy music labels worked, then or now.”  This Modernists CD backs that statement up to the hilt, with a scorching selection of black 60s American music that for one reason or another never achieved hit single status, but nonetheless rocks the house to this day.  Some tracks never reached England at the time or were not issued at all: these include Little Eva’s terrific answer record to James Brown’s 1965 hit ‘Papa’s Got A Brand New Bag’, ‘Dynamite’, and Timmy Wilson’s inspirational ‘Long Ways To Go’.

Highlights come thick and fast on Modernists – Mel Williams’ 1966 answer to Dobie Gray’s 1964 hit ‘The ‘In’ Crowd’, ‘The Jet Set’, Jeb Stuart’s unstoppable 1967 boogaloo ‘Soul Jerk It, Baby’, Robert Moore’s 1968 cover of Bob & Earl’s hit ‘Harlem Shuffle’, Lee Bernard’s highly un-PC but thrilling  ‘Turn Around And Go’ and Lester Young & The California Playboys’ 1968 danceable reworking of ‘Stagger Lee’ and just about every other soul record of the period.  The Monkey also proves to be a popular and dynamic dance, with The Hustlers (‘Boston Monkey’) and Gene Burks (‘Monkey Man’) leading the dancefloor charge.

If you are looking for superb rhythm ‘n’ soul dancefloor fillers, with a distinct mod sensibility, Modernists delivers the goods the fold.

Buy A Decade Of Rhythm & Soul Dedication on CD at Ace Records. 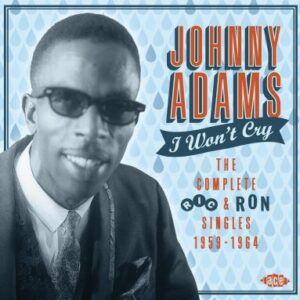 Born in Baton Rouge in 1932, Johnny Adams was a gospel singer until his early 20s. During the late 1950s, Adams’ neighbour, songwriter Dorothy LaBostrie (famous for writing ‘Tutti Frutti’ for Little Richard) encouraged him to try singing R&B. With a song she had specifically written for Adams, ‘I Won’t Cry’, LaBostrie arranged an audition with Joe Ruffino.  Ric & Ron independent label founder Ruffino signed Adams straightway and a record of ‘I Won’t Cry’ was cut in 1959 with a band helmed by Mac Rebennack, AKA Dr. John.  This was the beginning of a long and very successful career for “The Tan Canary” Adams.

Compiled and noted by Tony Rounce, I Won’t Cry contains all Adams’ Ric and Ron singles, the foundation of the singer’s reputation as one of the great New Orleans song stylists.  It’s difficult to pick specific highlights from this great 1959-1964 period, but special notice should be given to Adams’ soulsville version of Hank Williams’ 1951 hit ‘Cold, Cold Heart’, his version of Rebennack’s Ray Charles style composition ‘Showdown’, Dolores Johnson’s romantic ballad ‘Let The Wind Blow’ and country great Ernest Tubb’s ‘Walking The Floor Over You’ (previously unreleased).

If you are looking for the crème de la crème of Crescent City R&B, it’s right here. 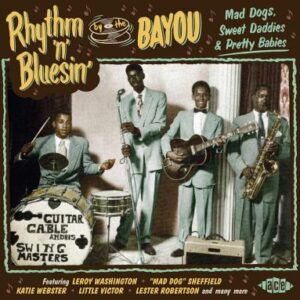 The tenth Ace CD compilation compiled and noted by Ian Saddler, in their ‘By The Bayou’ series, is yet another classic. This edition focuses upon wild and uninhibited rhythm ‘n’ blues foot-stompers from the 50s and early 60s, recorded down in South Louisiana. In fact, many of these rollicking’ blues rockers, influenced by swamp music, blues, Lloyd Price, Fats Domino and Zydeco, that shaped the white teenage rockers music that followed, are rarities or previously unreleased. Once again most of the artists were discovered and recorded between the late 50s/early 60s by J.D Miller at his Crowley studios.

Mad Dogs, Sweet Daddies & Pretty Babies opens with the suitably manic 1961 number ‘Papa Lou And Gran’ by Little Victor & His Orchestra, who are definitely channelling Little Richard for inspiration. The pace doesn’t really let up from that point on.  Katie Webster pounds the piano for ‘Hoo Wee, Sweet Daddy’ before Tabby Thomas slows the pace a little for the grinding ‘I’d Love To Tell’.  Local legend Lester Robertson is featured with three numbers, including two versions of the swinging ‘Pretty Woman (Take It Home To Grandma)’, one featuring Little Richards mighty backing band, The Upsetters. Mad Dog Sheffield definitely lives up to his name on the rabid ‘Mad Dog’, South Louisianan vocalist/harmonica master Lazy Lester (a pivotal part of J.D Miller’s recording unit) bows up a storm on ‘Tell Me Pretty Baby’, while King Karl & Guitar Gable make Ray Charles’ ‘Mary Lou’ their own in thrilling style.