~
Darondo – Listen To My Song: The Music City Sessions 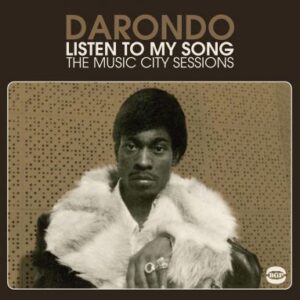 Alec Palao’s celebrated 2011 3 CD set, The Music City Story, a compilation of 75 odd tracks produced at Ray Dobard’s Music City Records in Berkeley, California, over the Bay from San Francisco, was an incredibly awe-inspiring work of contemporary American black music archaeology. Covering a period of 25 years, from the early 1950s until the mid 1970s, the collection of street level rhythm & blues, Doo Wop vocal groups and soul which the defensive black entrepreneur Dobard recorded, above his record shop premises, The Music City Story provided an incredible introduction to the label’s obvious abundance of musical riches.

One of Palao’s major rediscoveries in Dobard’s Music City Records’ spacious archive was the deeply funky 70s soul singer-songwriter, Darondo. The notoriously frugal and temperamental Dobard only ever issued one brilliant, powerfully soulful single by the street-smart hipster Darondo (check out his debonair ‘Superfly’-style portrait on the cover of Listen To My Song) on Music City – ‘Didn’t I’. This exceptional BGP/Omnivore/Ace vinyl release (an Ace CD was issued last year) is the exact Darondo album, in length and running order, which should have been out on Music City in 1974. And it’s a killer.

From the hypnotic, no-holds barred funk of ‘Get Up off Your Butt’, propelled by slick rhythm guitar and a harmonica, to the effortlessly melodious ‘Do You Really Love Me’, though bittersweet ‘I’m Lonely’ or the cool strutting ‘Luscious Lady’, Darondo’s astonishing vocals, darting from growling baritone to soaring falsetto, dominates proceedings. Then there is the naturally smooth come on of ‘Gimme Some’, the joyful, brass driven ‘I’m Gonna Love You’, the blissful title track and the intense hip shake of ‘I Don’t Understand It’ to contend with.

Darondo (born and raised William Daron Pulliam in Berkeley, California) should have deservedly joined the likes of Al Green, Marvin Gaye and Curtis Mayfield as an internationally renowned soul legend back in ’74. Hopefully, that will now come to pass with the release of this classic album. Buy Listen To My Song: The Music City Sessions today – the quintessence of funky satisfaction is definitely guaranteed.

Get Listen To My Song: The Music City Sessions on Ace Records website. The CD version referred to above is here. 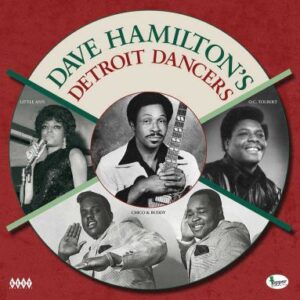 Another treat for vinyl lovers this month – 14 brilliant Northern Soul numbers, taken from the vaults of the legendary Motor City producer Dave Hamilton, compiled and noted by Ady Croasdell, on one Kent/Ace album. Yes, Christmas has once more arrived early this year.

Hamilton’s life in black American music began playing jazz in small combos during World War II and carried on through to producing and creating electro funk in the 1990s. He played with Hank Ballard & The Midnighters, John Lee Hooker and was a featured player on many early Marvin Gaye Motown classics. During the 60s and 70s, Hamilton ran many Detroit soul labels (Temple, Topper and Demo Ristic, to name but a few) that produced Northern Soul, contemporary and soul funk cuts by various artists, many included on this album.

Kicking off with the first track that Croasdell uncovered in Hamilton’s archives, Little Ann’s quizzical dancer ‘What Should I Do’, the LP delivers a succession of 60s dancefloor treasures. Highlights include Tobi Lark’s strident ‘Sweep It Out In The Shed’, Dottie & Millie’s tender ‘Talkin’ About My Baby’, The Ravins’ mesmerizing ‘Your Love Is What I Want’, O.C. Tolbert’s perfect soul confection ‘I’m Shooting High (I Reach For The Sky)’ and the propulsive ‘You Got Me Turned Around’.

Dave Hamilton’s Detroit Dancers is the ideal compilation for playing out, or at home, if you want to move your feet. This intoxicating collection 60s Detroit dance music is a timeless joy. Northern Soul dreams are made of this.

Tampa Red – Dynamite! The Unsung King Of The Blues 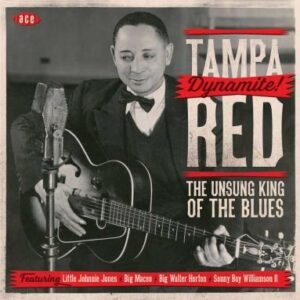 This is an extraordinary double Ace CD celebrating one of the often unjustly overlooked masters of the blues idiom – Tampa Red. Compiled by John Broven and noted with authority by Jim O’Neal (the Living Blues magazine writer visited and assisted the ailing blues singer on the South Side of Chicago from 1973 until his death in 1981), Dynamite!, based upon master tapes and original metal work transfers for remarkable sound quality, focuses upon the later years of his illustrious RCA Victor and Bluebird recording career.

Beginning with his last recordings for RCA, which feature harmonica playing legends Sonny Boy Williamson II and Big Walter Horton (the Latin rhythms of ‘Ramblers Blues’ and the rambunctious ‘Evalena’ are particularly fine), Dynamite! unfolds in reverse chronological order towards Tampa Red’s 1942 Bluebird recordings; including his infamous hit compositions ‘She Want To Sell My Monkey’ and ‘Let Me Play With Your Poodle.’ Hank Penny’s country swing 1947 cover version of ‘Let Me Play With Your Poodle’, in which the ‘poodle’ in question is described as having “the face of a teddy bear”, was quickly withdrawn and replaced, with the same catalogue number, by Penny’s version of Jack McVea’s ‘Open The Door Richard’.

Apparently, many contemporary blues fans don’t appreciate Tampa Red’s use of the kazoo, which harks back to the vaudevillian roots of both blues and country music. They really should get with it, but in any case 31 tracks on this 50-track disc do not feature the instrument. Instead they should concentrate on Red’s clear, distinctive voice, virtuoso guitar playing and the quality of his sophisticated and witty song writing. Legendary blues artists, such as B.B. King and Elmore James quickly picked up on Tampa Red’s dynamic compositions. King covered the explosive ‘She’s Dynamite’, the vengeful ‘Crying Won’t Help You’ and the sorrowful ‘Green and Lucky Blues’, while Elmore James recorded the yearning ‘When Things Go Wrong With You (It Hurts Me So)’, garnering more success than its composer’s 1949 release on RCA.

Dynamite! The Unsung King Of The Blues makes a solid case for Tampa Red as one of the greatest blues men of them all. This lavish and utterly indispensable compilation is the heartfelt tribute Tampa Red so richly deserves. If you love the blues, this is an obligatory purchase.

Get Dynamite! The Unsung King Of The Blues on CD from Ace Records website. 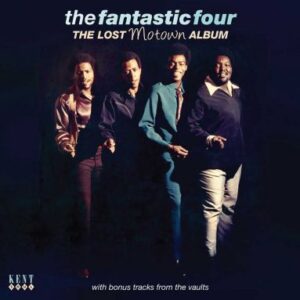 Compiled by Chris Jenner and Tony Rounce, who also wrote the notes, this is, as the title states, the album that should have been released by the celebrated Detroit vocal quartet on Motown. The first 12 of the 25 tracks on this superb CD would have been issued early in 1971 for a Fantastic Four album issued on Berry Gordy’s subsidiary Motown label, Soul.

The album was to be entitled How Sweet He Is, which Tony Rounce interprets as signifying that Motown were planning to launch The Fantastic Four’s dazzling lead singer “Sweat” James Epps as a solo artist and had no real interest in the group.

The Fantastic Four had enjoyed success at Motown’s main rival label in Detroit, Ric Tic, for whom they had cut their debut George ‘Funkadelic’ Clinton produced single in 1966, ‘Live Up To What She Thinks’. Seeing that the group were poised for bigger things, Gordy persuaded the group to sign with Motown, but after three successive Fantastic Four singles failed to chart for the label the writing was on the wall.

Listening to the incredible How Sweet He Is album today, one can only marvel at the decision not to issue the disc at the time. From the rousing opening ‘Take Him Back If It Makes You Happy’, through a stunning version of Marvin Gaye’s ‘If This World Were Mine’, a passionate interpretation of The Beatles’ ‘We Can Work It Out’ to the yearning concluding track, ‘I Can’t Forget About You Baby’, How Sweet He Is delivers 100 per cent prime Motown soul.

The remaining bonus tracks are also outstanding. The previously unreleased Fantastic Four rendition of Johnny ‘Hang On In There Baby’ Bristol’s ‘How Big Is Your Heart’ is a dance track that would have definitely been a huge hit on the Northern Soul scene. ‘Forgive My Jealousy’, ‘Loving You (Is Hurting Me)’ and the infectious dancer ‘Pin Point It Down’ are a few of the other extra tracks that also make the grade.

With any luck, this CD retrospective will further raise the profile of the aptly named Fantastic Four. Befitting The Fantastic Four’s status as one of the great-unsung groups of Motown, perhaps Kent/Ace will eventually release How Sweet He Is as a vinyl LP. Fingers crossed.

Various Artists – Boppin’ By The Bayou: Rock Me Mama! 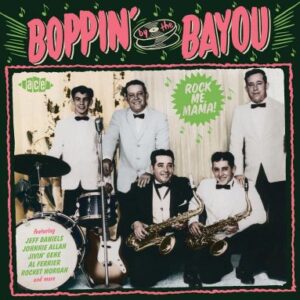 Unbelievably, this is the eleventh CD in this now classic compilation Boppin’ By The Bayou series, which Ace launched back in 2012. Rock Me Mama! Definitely maintains the incredibly high benchmark of the series, featuring an equally wondrous collection of late 50s/early 60s Southern rockabilly and rock ‘n’ roll, suffused with hot New Orleans R&B and Cajun boogie. Once again superbly compiled and noted by Louisiana rock ‘n’ roll expert Ian Saddler, captures the tremendous vigour and raw power of the swampy rockabilly created in South Louisiana.

Mostly taken from the vaults of Louisianan label bosses JD Miller, Eddie Shuler and Floyd Soileau, this could well be the best release in the series to date. Featured artists from other editions of Boppin’ By The Bayou return with further prime examples of hot gumbo rock.

Rock Me Mama! hits the ground running with the rollicking ‘Switch Blade Sam’ by Jeff Daniels, in which Charlie Brown, Stagger Lee, Switch Blade Sam and the narrator have a violent altercation over Long Tall Sally and other shady women in a sleazy bar.

Among the numerous highlights are a singer known as Danny singing the slow, bluesy ‘Bad Luck’ (Johnny Cash should have covered this), and the mysterious Johnny Jano’s jumping rockabilly ‘Havin’ A Whole Lotta Fun’. Richard Bros (their picture featured on the CD cover) deliver a quintessential slice of South Louisiana rockin’, Al Ferrier sings a fine cover of Hank Williams’ standard ‘You Win Again’, while it’s easy to see why Ian Saddler picked Ken Lindsay’s perfect rockabilly ‘Rock Me Mama’ is the title of the compilation.

Buy Rock Me Mama! on CD from Ace Records website.