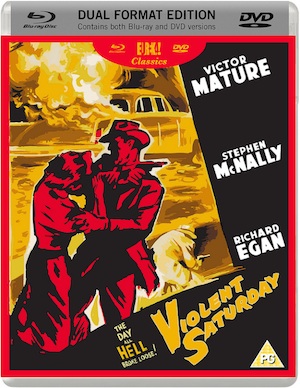 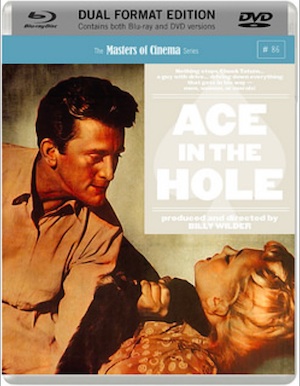 Writer/director Billy Wilder’s black and white masterpiece Ace In The Hole was just too hot to handle in 1951. Only Alexander Mackendrick’s magnificent 1956 Sweet Smell Of Success, which also failed commercially upon its release, rivals Ace In The Hole as 1950s Hollywood’s most single minded assault upon the media industry. Ace In The Hole is perhaps even more relevant today than it was in 1951. Wilder’s acidic and cynical picture, co-written by the director, Lesser Samuels and Walter Newman, also casts dark accusations against the shallow values and aspirations of capitalist American society and those who unquestioningly live within it.

Wilder had already produced harsh declarations about American life that had also attracted audiences, such as the film noir Double Indemnity (1944), his Oscar winning study of alcoholism The Lost Weekend (1945) and his shotgun broadside against Hollywood, Sunset Boulevard (1950). Yet nothing could have prepared them, and the critics, for the unrelenting onslaught of Ace In The Hole. Wilder’s first film as producer gave him additional artistic freedom, which he courageously pushed to the limit, propelled by his star Kirk Douglas’ vibrant and furious performance.

Alcoholic big city journalist Chuck Tatum (Kirk Douglas) finds himself down and out in Albuquerque, New Mexico (which he later describes as a “sun baked Siberia”). Tatum manages to talk his way into employment with local paper editor Jacob Q. Boot (Porter Hall), biding his time until he can uncover a story that will put him back in the big league: “I can handle big news and little news. And if there’s no news, I’ll go out and bite a dog.”

After a fruitless year, a golden opportunity presents itself to Tatum. The owner of a tourist shop near a mountain range, Leo Minosa (Richard Benedict) becomes trapped in a cave while hunting for American Indian relics. Tatum learns that Leo could be reached within hours by shoring up the weak cave entrance, but the journalist recalls the national story that was created in 1925 when cave explorer Floyd Collins was trapped in similar circumstances. Reporter William Burke ‘Skeets’ Miller had interviewed Collins for a week inside the cave in and had received a Pulitzer Prize for his efforts. Tatum envisages that this story will bring him the fame he craves and a speedy return to a desk on a New York national newspaper.

Tatum takes charge of the situation and insists that the rescue is mounted by drilling from the top of the mountain, a much lengthier process lasting a week. As Tatum builds the “Curse Of The Mountain Of The Seven Vultures” story, with the aid of the corrupt local sheriff (Ray Teal), who will benefit from the publicity for his forthcoming election, crowds from around the country flock to see the human interest drama unfold. This situation also brings profit to Leo’s disloyal, egocentric wife, Lorraine, (a magnificent turn by the underrated Jan Sterling) who was about to leave her husband but finds that business is booming in their shop for the duration of his confinement. After five days, during which time funfairs, a special “Leo Train” has been chartered to bring further hordes of onlookers and a We’re Coming Leo song has been composed, Tatum is on the verge of getting all he desires, but the story that he created soon runs away from him.

Wilder pointedly denounces Chuck Tatum throughout, but the director does not really dispute his utterly contemptuous view of modern society. The forces of law and order are corrupt, the public are easily led by their fascination with the hapless plight of one individual (who is only sympathetic due to his predicament) for their own selfish interests and the skilful media is always ready to fulfil their dark daydreams. Douglas is astonishing as the manic, egotistical, misanthropic Tatum, but Jan Sterling is equally convincing as the terminally bored but fearful platinum blonde. Sterling also gets to deliver some of Wilder’s best darkly comedic lines. When ordered by Tatum to attend a religious service for her husband, to build up the couples public image for the attending press, Lorraine answers – “I don’t pray. Kneeling bags my nylons.”  Lorraine is also the one character that really has a clear idea of whom Tatum actually is – “I’ve met a lot of hard boiled eggs in my time, but you – you’re twenty minutes.”

Ironically, for a film mocking the society of the spectacle, Ace In The Hole looks stunning; Charles Lang’s black and white photography in a panoramic sweep captures the vast numbers of onlookers who swarm to the immense cliff face. Hugo Friedhofer’s considered score only heightens the grim mood and tension by not contributing any obvious Hollywood themes for the characters.

With a fine transfer of the picture, a 40 page booklet (featuring an essay by Emmanuel Burdeau and superb stills from the production), an informed half hour overview of the film and its place in Wilder’s cannon by and a full length 1982 documentary on the director, Portrait of a 60% Perfect Man: Billy Wilder, directed by Annie Tresgot and Michel Ciment, featuring interviews with Jack Lemmon, Walter Matthau and Wilder himself, Eureka! have produced the perfect dual format edition of Ace In The Hole.  This is definitely one for the collection for any serious film buff.

Though it shares Ace In The Hole’s composer Hugo Friedhofer, a baren, sun beaten desert landscape (in this case Arizona) and is a Eureka! Entertainment/Masters Of Cinema duel format release, Richard Fleischer’s remarkable 1955 melodrama/heist movie Violent Saturday is a very different film noir – filmed in widescreen CinemaScope and lurid DeLuxe colour (other great colour film noirs include John M. Stahl’s 1945 Leave Her To Heaven and Sam Fuller’s 1955, House Of Bamboo). Arguably not in the same league as Ace In The Hole (and certainly not as well known or celebrated), but Fleischer’s daring cross between a Douglas Sirk/Vincente Minnelli style melodrama and Stanley Kubrick’s The Killing, based on William L. Heath’s novel and scripted by Sydney Boehm (who wrote Fritz Lang’s 1953 noir, The Big Heat), has a hell of a lot to recommend it.

Three professional bank robbers come to Bradenville (in fact Bisbee, Arizona), a small, peaceful mining town in Arizona. The bandits are led by Harper (the highly impressive Stephen McNally), who is posing as a jewellery salesman. Harper is soon joined by his brutish heavy, Dill (Lee Marvin, one of his great early supporting role turns), and Chapman (J. Carrol Naish), who sports the demeanour of a bookish college professor rather than a bank robber. From the Bradenville Hotel, the determined trio plan their raid upon the local bank.

Meanwhile, life in the small town continues as it has for years. From the very top to the bottom, the normality of Bradenville is revealed to be an illusion. The wealthy manger of the town’s copper mine, Boyd Fairchild (Richard Egan), is tormented by his unfaithful wife Virginia’s (Margaret Hayes) love affairs (the one depicted is with Brad Dexter, who would in 1960 be cast by John Sturges as a member of the Magnificent Seven) and hits the bottle.  Though he loves his wife, Fairchild seriously considers an affair with an attractive local nurse Linda Sherman (Virginia Leith).  Boyd Fairchild’s mine supervisor, Shelly Martin (Victor Mature), enjoys an outwardly happy family home life, yet he is humiliated that his son views him as a coward as he did not serve in the US forces during World War II, due to his skill and expertise being required in the mining industry.

Linda Sherman is also the object of desire for mild mannered bank manager Henry Reeves (Tommy Noonan), who stalks the nurse by night, intently gazing at her as she undresses at her window. Timid librarian Elsie Braden (a committed Sylvia Sidney, who had starred many years before in Fritz Lang’s 1937 classic noir, You Only Live Once) is mired in debt and will even steal to try and restore her financial fortunes. Outside of town, an Amish farming family, led by Stadt (Ernest Borgnine), are removed from the personal intrigues of Bradenville, but even Stadt’s faith will seen be tested as all the characters are drawn into the hoods Saturday bank robbery.

Fleischer handles the mix of the vast widescreen melodrama and violent crime movie action with the same adroitness as he evinced in his more conventional film noir’s, Armoured Car Robbery (1950) and The Narrow Margin (1951). Though dazzlingly shot in CinemaScope by Charles G. Clarke, the picture has an intimate, claustrophobic feel, and Fleischer manages to focus upon all the numerous well drawn characters delineated by Heath and Boehm. Like Ace In The Hole, Violent Saturday seems years ahead of its time in its focussed critique of small town American society, the inhabitants of which appear to be even more peculiar than the bank robbers (David Lynch would mine this rich seam in the 1980s), and in its realistic approach to violence. Both Peter Weir’s 1985 picture Witness and David Cronenberg’s 2005 A History Of Violence owe something to Fleisher’s film.

The cast are really outstanding. Lee Marvin’s twisted Dill, hopped up on Benzedrine that he snorts throughout the picture from an inhaler, is an unrepentant, sadistic killer.  When a boy tries to pick up Dill’s inhaler, which he has accidently knocked to the sidewalk, the hood just stamps down hard on his hand and tells the kid to “get lost.” Stephen McNally is equally sinister is the unreservedly ruthless leader of the gang, Borgnine’s Amish father is perfectly believable (despite his false beard), while Victor Mature gives one of his best performances as the disillusioned father, desperate for his son’s admiration.

As with Ace In The Hole, Eureka! have created a marvellous dual format edition of Violent Saturday. The quality of the picture transfer is truly exceptional, highlighting Charles G. Clarke’s awe inspiring cinematography and Fleischer’s consummately professional use of the widescreen frame, reducing the amount of editing needed for any scene and stressing how the vast desert space surrounding them impacts upon the character’s lives.

Both director William Friedkin’s discerning video appreciation of Violent Saturday and Nicolas Saada’s film, concerning the making of the picture and its place within the context of Fleischer’s career, are highly informative and well worth watching. Together with a full essay by Adam Batty on the picture, and a booklet packed with original Violent Saturday campaign photos and posters, this is a textbook example of how to re-release an unjustly forgotten picture on Blu-ray & DVD.

Ace In The Hole and Violent Saturday are released in dual format (Blu-ray& DVD) editions by Eureka! Entertainment / Masters Of Cinema, 28th April 2014.

All words by Ian Johnston. You can read more from Ian on Louder Than War at his author’s archive.