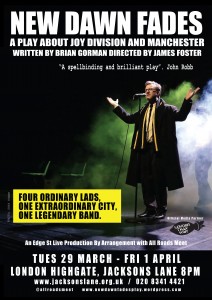 Tickets and details from here

Acclaimed production “New Dawn Fades – A Play About Joy Division and Manchester”, which chronicles the rise and fall of the influential post-punk band and the suicide of lead singer Ian Curtis, is set to tour England in March/April 2016. We love this play and reviewed it’s original version a couple of years ago.

It is a classic tale of four ordinary lads from Manchester, Salford and Macclesfield who, inspired by the punk revolution of the 1970s, came together to form one of the most influential bands of all time, Joy Division.

This unique production places the band within the context of Manchester’s history as a city, setting the scene for a completely new and fascinating look at the Joy Division story. The legendary Anthony H Wilson guides audiences through the heart and soul of both the band, and of Manchester, interviewing an array of historical figures along the way from Karl Marx to the Buzzcocks. The result is a spellbinding tale of love, passion, progress, grief, and of course music.

The play draws inspiration from the enigmatic lyrics of Ian Curtis, with a soundtrack featuring live performances of his most beloved tracks.

Joy Division made history – this play explores that fact in its truest sense.

A smash hit at the Greater Manchester Fringe Festival in July 2013, the production was subsequently staged at the Macclesfield WinterFest in Ian Curtis’ home town, where it played to capacity audiences and standing ovations. In March 2014, a one-off performance at Manchester’s Dancehouse Theatre was equally acclaimed by audiences and critics alike.
Now, due to popular demand, the show is going on the road, and tickets are on sale for the 2016 tour taking in some of the UK’s finest theatres from Liverpool to London.

“New Dawn Fades – A Play About Joy Division and Manchester” will be touring London, Bury St Edmonds, Liverpool, Manchester, and Leeds between 29 March and 23 April 2016.

“New Dawn Fades – A Play About Joy Division and Manchester” is written by Brian Gorman (creator of Everyman: The Story Of Patrick McGoohan – The Prisoner, co-writer of the 2013 stage version of Blade Runner, and writer/artist of the Joy Division graphic novel). The producers are Brian Gorman and Giles Bastow of All Roads Meet. The play is directed by James Foster (Mischief Night, The Violators and Diary of a Bad Lad).
The play stars Michael Whittaker as Ian Curtis, Natalie Perry as Debbie Curtis and Lee Joseph as Tony Wilson

What the reviewers said about New Dawn Fades: A Play About Joy Division & Manchester:

“… a spellbinding and brilliant play about one of the greatest bands of all time. I totally urge anyone left out there who believes in music to go and see it.”

“I was crying. It was very emotional at the end. It captured everything perfectly. I loved it; it had everything – the music and the emotion… there was such a buzz in the building.”

“New Dawn Fades is more than a play about Joy Division; it’s about Manchester, friendship, love and heartbreak … it’s clear this is a piece full of energy.”

“It’s all very entertaining and works unexpectedly well, especially at capturing the spirit of the times…”

“This is a very ambitious play and (the director) works wonders to achieve many complex scenes with style.”

A powerful and irresistible glimpse of an exciting time for the development of Manchester, Salford and alternative pop culture.”

“Let’s just say, this is an experience you won’t easily forget.”