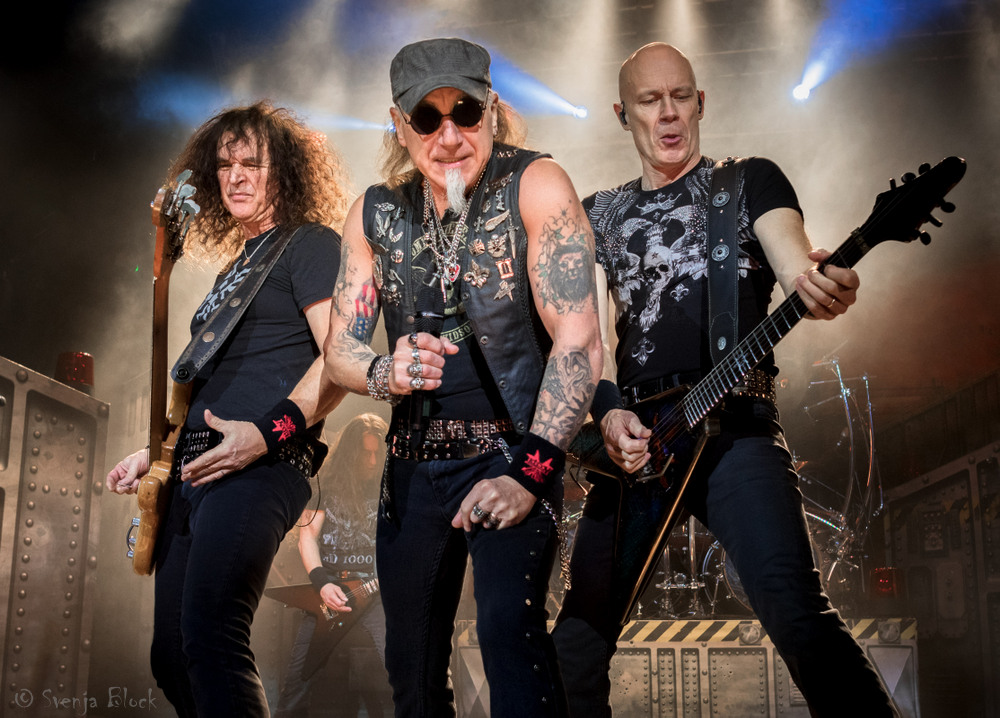 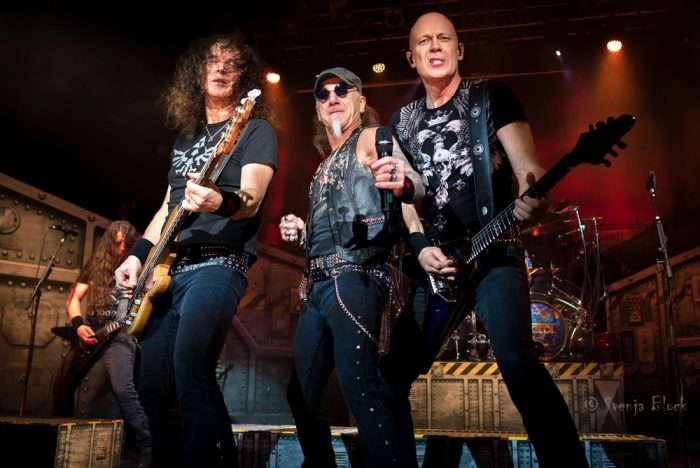 Accept, the pioneers of German metal and beyond, rolled into London on Thursday night during the European leg of their The Rise of Chaos World Tour 2018. The five-piece combo delivered a  triumphant, 2 hour lasting, surely exhaustive but nonetheless high energy sold out show.

Koko, also still known to many as the legendary Camden Palace, has got to be one of London’s most beautiful live music venues. It’s a former theatre after all and judging by the queue, which amazingly seemed to stretch all around the block, it’s only fair that tonight’s Accept gig was full to capacity. It took me a while to reach the pit for us photographers…it featured an added small-ish ramp in the middle for the band to have some extra fun on stage and to enable close encounters with keen supporters behind the barrier.

Accept as a band has been through a hell of a lot line-up changes during their several decades spanning extraordinary career. Today, highly skilled guitarist Wolf Hoffmann remains an original ca. 1976  member on board this brilliant Teutonic ship along with bassist Peter Baltes. 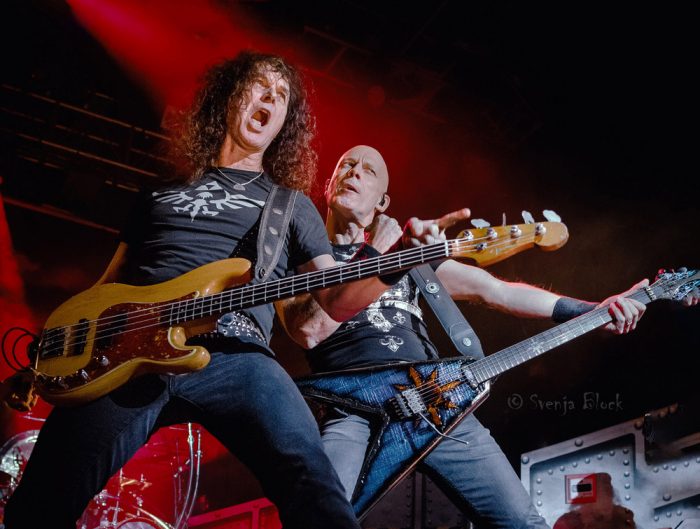 Lead singer and Accept founder Udo Dirkschneider left twice and it should be noted that American singer/songwriter Mark Tornillo has been his worthy permanent replacement since 2009.  I’m in no way dissing Dirkschneider’s achievements here, we are talking about two entirely different personalities who have both always known how to deliver their captivating live performances.

At 8.45 pm the heavy metal legends take to the stage and launch straight into ‘Die By The Sword’, followed by ‘Stalingrad’ and ‘Restless And Wild’.

The venue is a sea of arms instantly, fists are punched into the electrified air and I truly regret that the photographers three songs only rule is up already. We have to leave the pit and I fight my way through to the stairs that lead to the upstairs balconies to the soundtrack of ‘London Leatherboys’ and a loud and very appreciate audience singing along to this very fitting anthem!

This is where I decide to pack away my gear even though we have been allowed to continue to take photographs inside the venue for the duration of the show.

Accept is a band that has been at the back of my mind since my childhood when growing up in Berlin. They always seemed to feature in one German music magazine or another, their tour posters could be seen on the street. Metal, industrial, post punk, punk rock, alternative, and hard rock was always played in the long gone and sorely missed edgy and not so innocent rock clubs in Berlin Schoeneberg, Kreuzberg and Spandau. I never underestimated word of mouth either (or sometimes looking at a friend’s cool band badges/pins stuck to their leather or jeans jackets and listening to Accept on vinyl).

My mind wanderes back to 2017, when Accept played a spectacular, special three part set at Wacken Open Air, the world’s biggest Heavy metal and hard rock festival in the world.

Back in London I was finally able to soak up the electrifying and unifying atmosphere at Koko from upstairs as an Accept virgin so to speak. I watched and listened to Wolf Hoffmann’s amazing and legendary entertaining playful guitar solos, and absorbed the sound of the 5 new songs from current album ‘The Rise of Chaos’ (Accept’s 15th album to date) as well as older classics. 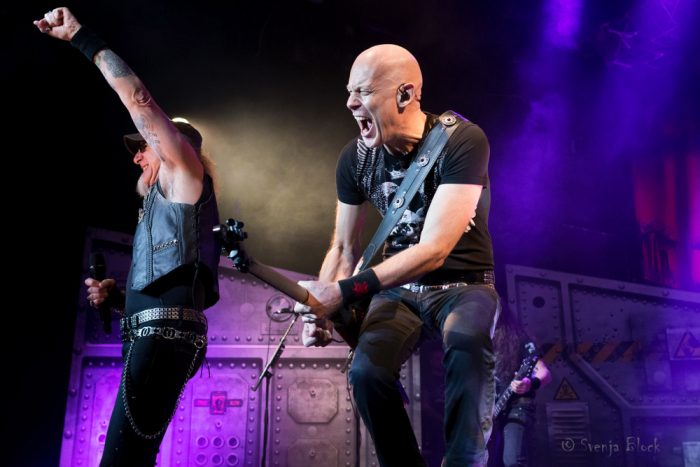 Drummer Christopher Williams and second guitarist Uwe Lulis clearly blend in effortlessly with the other boys. Make no mistake, this band is tight as fuck and they love to play fast paced rock’n roll just as it should be, topped by their fantastic and entertaining lead singer Mark Tornillo.

Thanks for a brilliant night out Accept!

Dye By The Sword

The Rise Of Chaos

Princess Of The Dawn

Up To The Limit

Fast As A Shark

Balls To The Wall 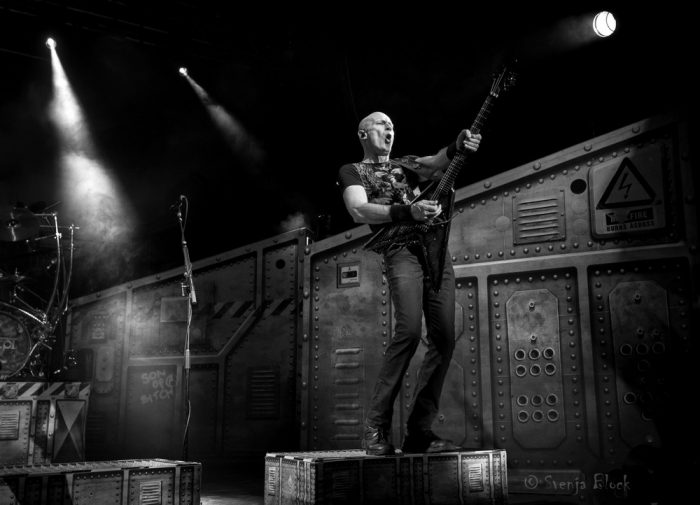 Accept’s new album ‘The Rise Of Chaos’ is out now via Nuclear Blast.

More info on Accept can be found on their official website: https://acceptworldwide.com/