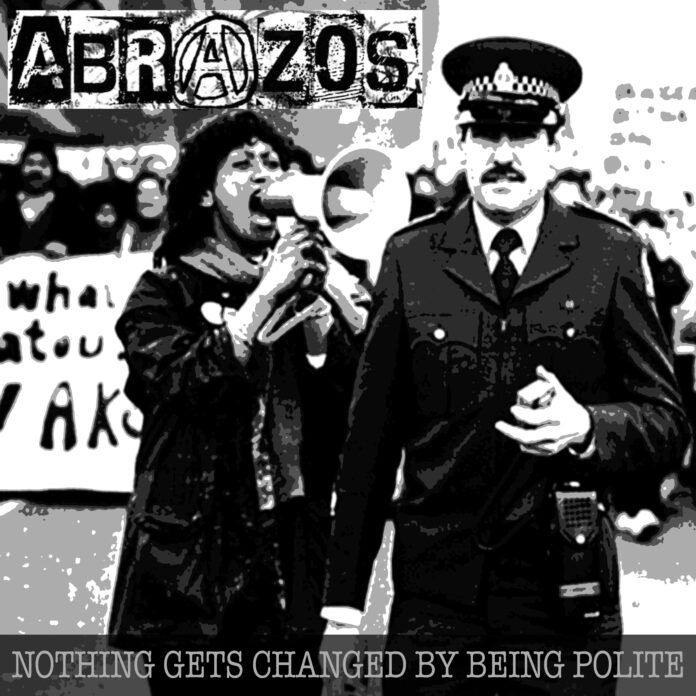 Abrazos – Nothing Gets Changed By Being Polite 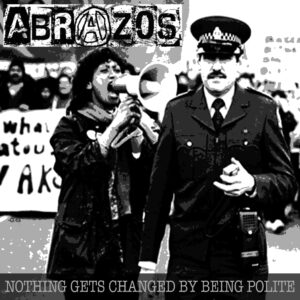 New LP from Abrazos, with the South Coast-based trio of Tony Suspect, Alan Growbag and Nath Haywire thrashing their way through 21 high speed punk offerings. Five have been reworked from old recordings, with the remainder being brand new compositions. A CD version will be issued later in 2022..  Ian Canty minds his manners…

Abrazos (hugs in Spanish) initially was a solo project for Tony Suspect, who has played in many punk bands over the years including Portiswood, Pilger and Screwed Up Flyer. Originally the object was to provide an outlet for songs that examined the frustrations he found in modern life. He soon recruited Alan Growbag of the mighty Hack Job for bass and backing vocal duties and the pair commenced writing and recording. To be able to move away from the studio and towards the stage, it was necessary to add Nath Haywire on guitar, due to the unescapable fact that Tony could not play guitar and drums at the same time.

They’re a self-confessed “no frills DIY punk band” and as such they have blazed a path across the local live circuit with a string of fine, fiery and feisty performances. I reviewed their great split 45 with Brain Anguish a while back (read more about that here) and now they are back with this full length LP.

Nothing Gets Changed By Being Polite gets underway with Neighbourhood Witch, a shot of well-targeted vitriol at curtain-twitching sticky beaks and online lynch mobs everywhere. The combination of growling bass, nimble but heavy guitar, thudding drums and dual vocals goes down a treat and lets the listener know just what is in store. A local hero is deservedly saluted on Packham, with the message of animal rights and valuing the environment right to the fore and delivered in superfast time.

Then Be Like Elijah sets out the story of pacifist Elijah McClain, who was killed in a shocking incident of police brutality in the city of Aurora, USA. The song is concise and to the point and it concludes that if anything good can come out of this horrendous event, it would be that his life’s example can shine brightly for others to follow.

Both the headlong, exciting thrust of The One Percent and Slight Of Mouth confront the real enemy (it is clearly no fluke that they cover The Business’ Sabotage The Hunt later on this record), the ones that continually blame others for society’s misfortunes while they pocket as much bunce as they can and slide away from any blame. The pair of tunes are both darn accessible too and they are followed by a thrilling Under Attack, which perhaps has even more resonance bearing in mind the war in the Ukraine.

Alan’s gruff vocal contrasts well with Tony’ voice on the self-explanatory V.I.P.F.U. and Car Crash TV rallies against the vacuous nonsense that fills the television schedules. The anthemic title track has a cutting spoken word sample that leads into a celebration of sheer resilience that is often necessary to get by in the face of the deprivations that seem to be heaped on one on a daily basis. It is truly is inspiring and then Strength In Numbers acknowledges how friendship can see us through dark times too.

Abrazos the song is a freewheeling blast of addictive hardcore mayhem and We Pretend To Work Because They Pretend To Pay Us, starting with a babble of voices, really highlights the pithy humour which is always at the heart of Nothing Gets Changed By Being Polite. This one segues into a short and snappy Warmonger. Greed Is Killing Us All clocks in at a mere 33 seconds, but in that time acidly captures one’s own complicity in the society that values cash over lives. The following Coke Costs Lives demonstrates another facet of the same problem, the multinationals and their exploitation of workers globally in the pursuit of profit.

Your Call Will Be Recorded notes the continual degrading of workers rights since the 1980s in the UK and Lie Upon Lies powers on to pinpoint the politician soundbite culture, where the truth doesn’t matter and the catchphrase does. It goes straight into Trapped, which been adapted to reflect the time during lockdown and the mental torment that came with it and then It’s Happened Again rallies against the creeping tide of fascism that the ruling elite perpetuates.

Halfcore barrels in and turns the spotlight on punk itself and the tendency towards macho attitudes, with the vocal attack here provided by Bratakus. Loose Change explores the reason why charity shouldn’t really be necessary in 2022 and a quickfire version of Sabotage The Hunt ends the LP with a power-packed flourish.

In short Nothing Get Changed By Being Polite is as fast, angry, exhilarating and noisy as punk should be in 2022 and this a great modern album of the genre. No scratch that, it is simply a great album, one that is full of righteous fire that rages against the ills that dog our existence, with sound common sense being allied to nippy and infectious music. This is achieved with such energy, spiky humour and a solid down to earth touch to the lyrics that makes sure it never hectors during the course of making one think. It all helps makes Abrazos and Nothing Get Changed By Being Polite truly vital – a “must hear” record I would say.