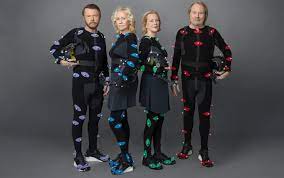 It’s the moment those voices kick in and you know it was worth the wait. One of the most defining sounds in pop is that exquisite elixir of Agnetha and Frida’s vocal chords – so icey yet emotional, so crystalline and so distinctive and yet so harmonious, so deceptively simple but so intriguingly complex. It’s perfect harmony – voices wrapped around each other – sometimes apart and sometimes together underling that vocal harmony is the highest state of art and in a world of chaos, harmony becomes even more hauntingly crucial.

The two new songs that they deliver so beautifully are both smouldering ballads…’I Still Have Faith In You’ sounds like it was created to be played on Radio 2 for ever and it probably will be whilst ‘Don’t Shut Me Down’ has a whiff of the disco backbeat that they patented so effectively in their mid period after that initial glam crossover that scored them their 1974 Eurovision super hit ‘Waterloo’ , after three years of struggle,  had faded from their sound.

They romped through the tail end of the seventies at the opposite end of the scale from punk but embraced by Glen Matlock who half inched one of their songs for ‘Pretty Vacant’ and poor old Sid who was also a big fan. They divorced, sang songs about it and split for good in the eighties. They went out of fashion despite never being in fashion and became the arch type guilty pleasure (the dumbest notion in pop music – what is there to be guilty about unless you believe that your record collection must be someone else’s list of ‘cool’). Those that knew- knew! Whether it was Sisters Of Mercy covering them with zero irony of Kurt Cobain bigging them up. Fuck fashion – melody is king and they became part of the fabric of modern life.

What is truly remarkable though is that they have emerged from the dusty memory banks sounding so perfect and so full of the Scandinavian perfection they trademarked.

40 years is a long time in any terms but in pop its a forever.

Since ABBA last released anything many of us have lived whole lives. When they exited the stage we had those lives in front of us but now many of us are cantering towards OAP land – it’s a sobering thought! Back in ABBA’s pomp, pop itself was young and now it’s a creaking old people’s home full of grey hairs and old hits and we are losing the founding fathers and mothers daily – it’s the twilight of the gods!

This makes the Swedish pop genii reappearance even more remarkable. They sound as fresh and sprightly and as full of piney zing as a Swedish forest as ever. It’s like nothing ever happened in all those decades. The only hint of older ABBA is that the songs are not quite as upbeat Europop as their prime time and that definitive run of brilliant hit singles that started with the deceptively bouncy ‘Waterloo’ and thundered through classic moments like the heart breaking haunting ‘Fernando’, the sultry ‘Gimme! Gimme! Gimme! (A Man After Midnight)’, the pop classic ‘Mamma Mia’ – so many hits that are impinged on your consciousness whether you liked them or not.

They also have the cascading melodic brilliance of perfect pop writers. It sounds easy but, like the Bee Gees, their imitators have proved year in and year out this level of pop is a rarified brilliance. A rare gift.